Gluten-free California sorghum is the focus of UC research 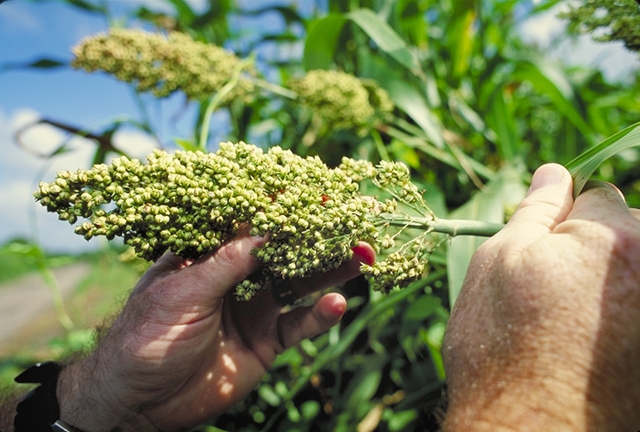 Sorghum grain can be milled into a gluten-free flour. (Photo: Wikimedia Commons)
As a Peace Corps volunteer in Niger, Africa, in the early 1980s, Jeff Dahlberg was intrigued by sorghum, a staple food being cultivated by the country’s vast population of poor subsistence farmers.

“I was impressed with the fact that sorghum was so drought tolerant,” Dahlberg said. “They used no irrigation at all.”

More than 30 years later, Dahlberg, the director of the UC Kearney Agricultural Research and Extension Center in Parlier, is still impressed with sorghum and believes it has potential to be a significant crop in California, where water is a serious concern.

Sorghum isn’t a new crop to the Golden State. It was introduced more than 150 years ago. In the 1960s, a half-million acres were planted to sorghum, mainly for animal feed.

“Now, if there were 20,000 acres in sorghum I would be surprised,” Dahlberg said. Alfalfa hay and corn silage are currently the two most common forages at California dairies, which maintain nearly 2 million cows.

Dahlberg initiated a five-year research project in 2012 with funding from UC Agriculture and Natural Resources aimed at reintroducing sorghum as a low-input crop for bioenergy, food and feed in California.

A unique characteristic of sorghum is its adaptability. In many parts of the world, from Africa to India to China, sorghum grain is used to make porridge, flat bread and alcoholic beverages for people to enjoy. In the United States, sorghum has traditionally been considered an animal feed. But growing interest in eating whole grains and gluten-free foods is generating interest in sorghum for human consumption.

Sorghum grain can be milled like wheat. Sorghum flour, which is naturally gluten-free, makes excellent flat breads, cookies, pancakes and waffles, Dahlberg said. By combining with other ingredients that help it maintain loft in the absence of gluten, sorghum can also be baked into traditional fluffy bread and cake.

Whole sorghum grain may be added to soups, makes a dish similar to couscous, and can be popped like popcorn for snacking. The stems of sweet sorghum can be pressed, like sugarcane, to produce sorghum molasses or syrup.

According to the Whole Grains Council, sorghum doesn’t have the inedible hull that surrounds other grains. Since it is typically eaten with all its layers intact, sorghum retains the majority of its nutrients. In addition, the wax surrounding the sorghum grain contains compounds called policosanols, which may have an impact on cardiac health. 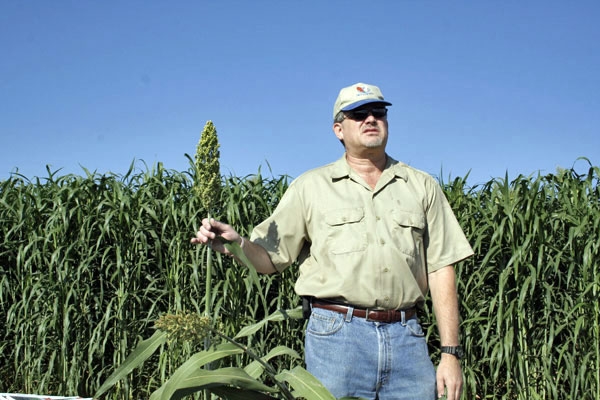 Jeff Dahlberg in a sorghum research plot.
The California sorghum research now underway at Kearney and the UC West Side Research and Extension Center is focused on hybrid forage and grain sorghum varieties. The results will also be applicable to varieties for human food and biofuel.

“We’re trying to understand whether or not the hybrids developed for the U.S. Sorghum Belt – Texas, Oklahoma, western Nebraska and South Dakota – are adapted to California conditions,” Dahlberg said. “So far, they are doing very well.”

The forage research will determine how to manage sorghum to maximize yield and reduce water and nitrogen use. Early results show that farmers can save a significant amount of water growing sorghum for dairy silage when compared with corn.

“We use less than 20 inches of irrigation water on our sorghum plots and getting 22 to 25 wet tons of material off a single crop. A corn crop will need 36 inches of water or more,” Dahlberg said.

The crop’s fertilizer needs are also quite low. In fact, too much fertilizer can cause the sorghum stalks to fall down, or lodge, which hinders harvest.

"When California farmers think about growing sorghum for gluten-free food, biofuel or animal feed, they will be able to access information generated by local research to help them make the decision," Dahlberg said.