Armstrong, who has spent her career working with nonprofit agencies and managing volunteer programs, worked with United Way Monterey County and the Alliance on Aging. She also was a campaign manager for a candidate for the Board of Supervisors of Monterey County. Her most recent job was stay-at-home mother for her daughters. After a two-year hiatus due to COVID-19, the California Department of Food and Agriculture hosted Ag Day at the Capitol in Sacramento on March 23.

“It was incredibly energizing to reconnect with so many legislators, partners, supporters and friends to share in the joy and promise of our work,” said Vice President Glenda Humiston. “Things almost felt ‘normal' again!” Among the many legislators who visited the ANR booths was Senator John Laird, who championed the historic increase to ANR's budget.

“No other event that occurs here, of the hundreds every year, draws crowds like Ag Day, and a lot of the legislators who have no concept or association with agriculture come by, plus their staff,” said Senator Jim Nielsen. “It's really a special day because it affirms the importance of agriculture to California and the world.” The following are some photos of the Ag Day event. To see more photos, check out #AgDay2022 on Twitter. 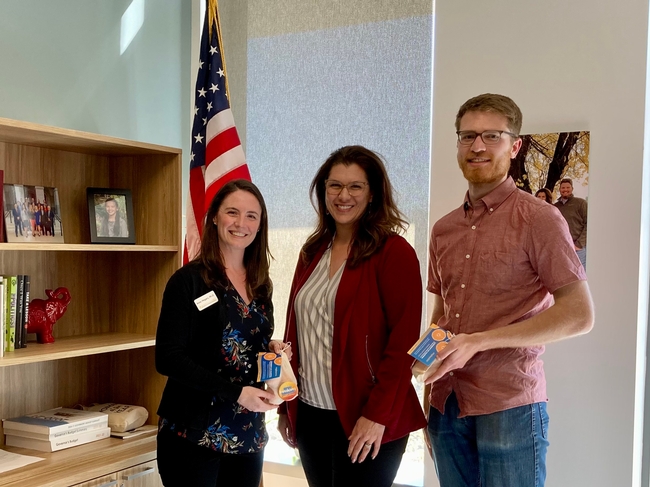 Assemblymember Megan Dahle, center, with Anne Megaro and Conor McCabe on the day before Ag Day. 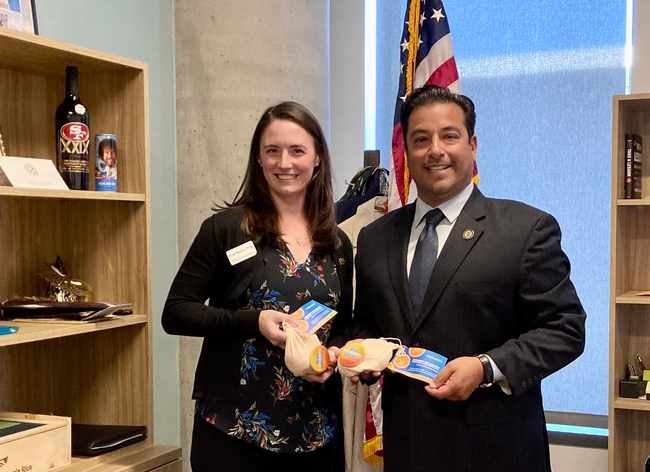 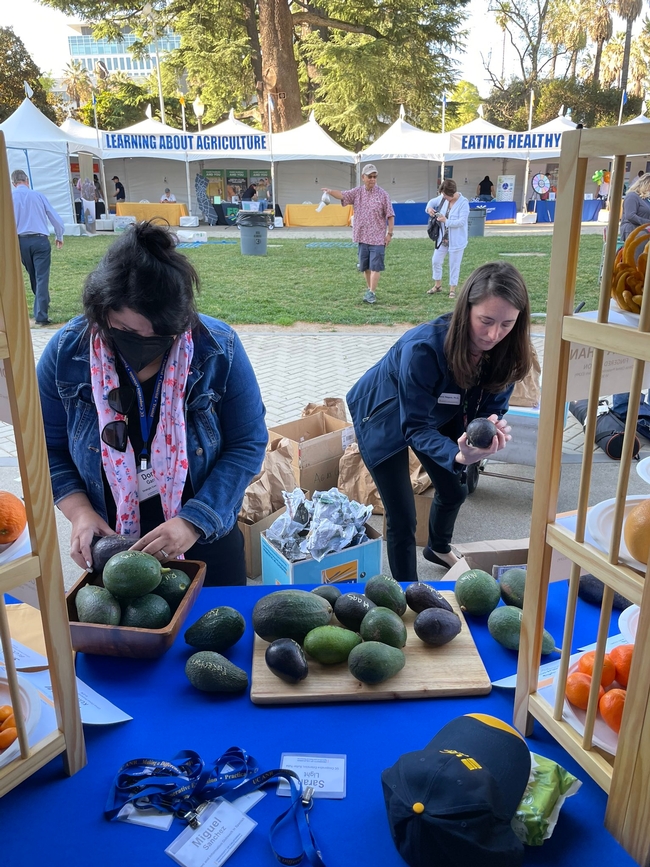 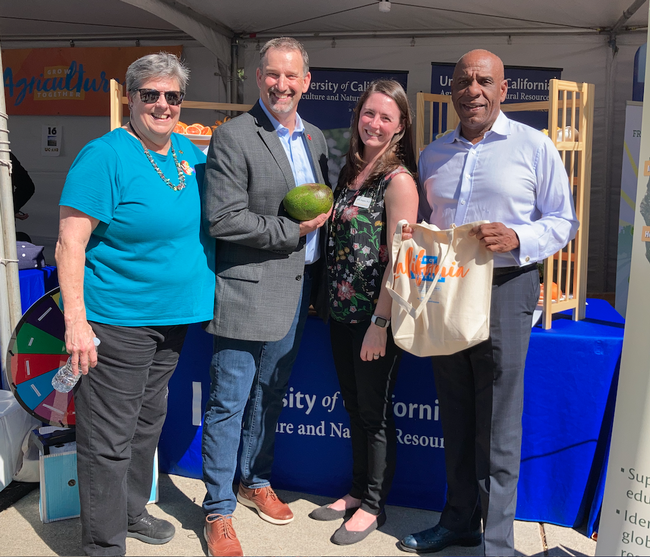 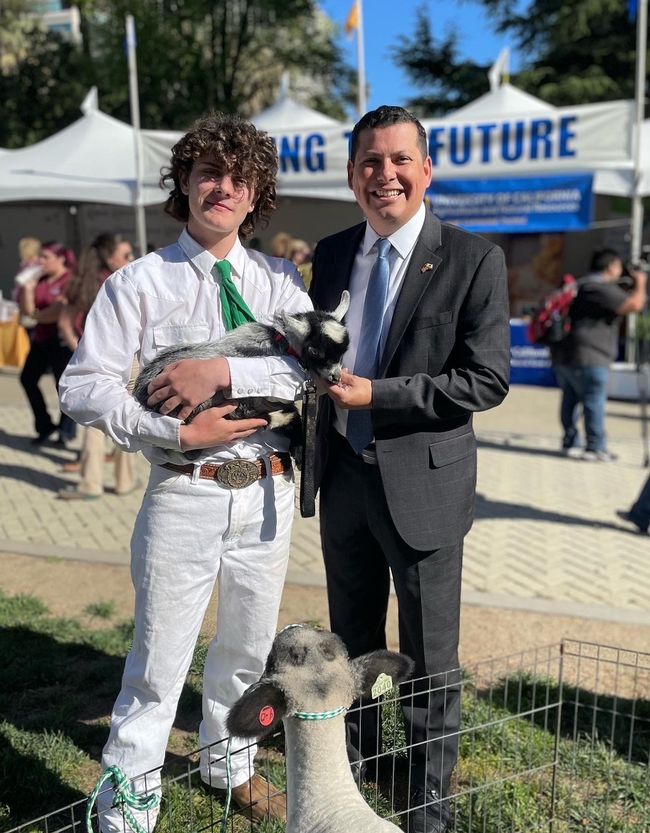 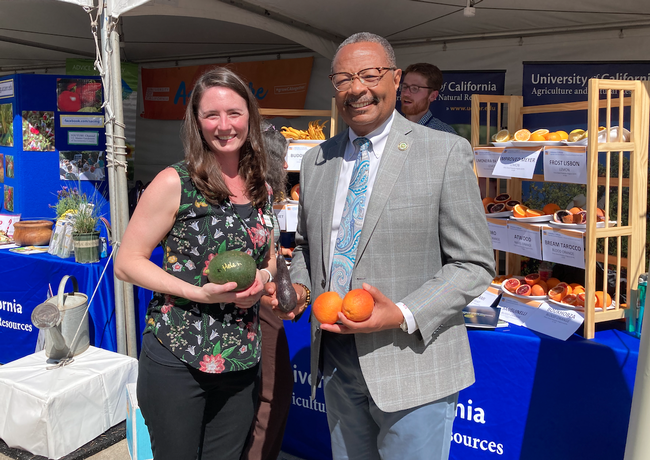 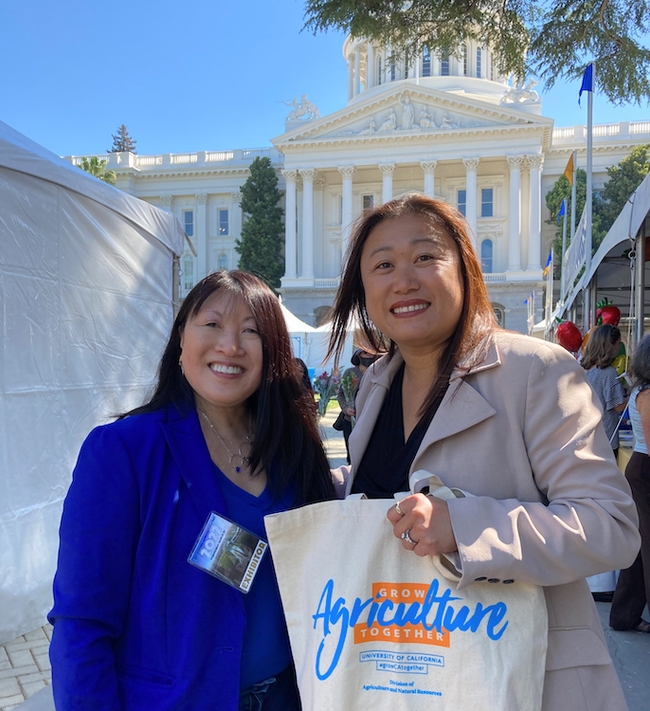 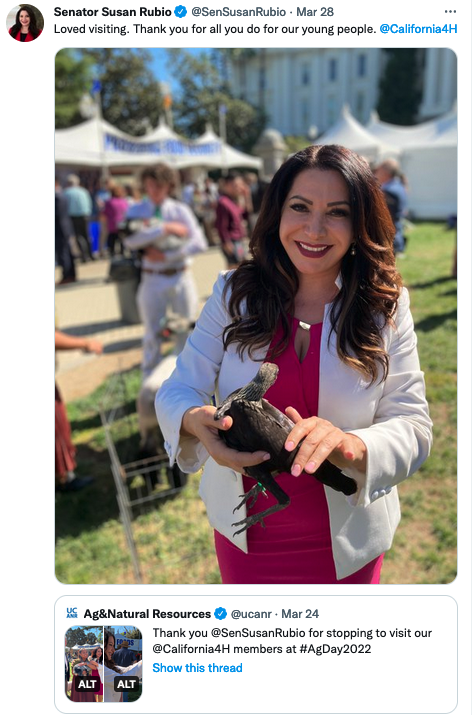 Jim Costa and Glenda Humiston met while Humiston was in Washington D.C. to testify before the House Committee on Agriculture for the 2022 Farm Bill review.

UC Vice President for Agriculture and Natural Resources Glenda Humiston led a delegation from California to meet with congressional members and staff on March 6-11 to discuss specific benefits of UC ANR in their districts and the importance of strong federal funding to support programs, including Cooperative Extension, 4-H youth development, nutrition education, and the research and extension centers.

The California delegation was part of the Association for Public and Land-Grant Universities (APLU) Council for Agricultural Research, Extension, and Teaching (CARET), which held their annual meeting and (virtually) visited Capitol Hill for the 40th year to jointly request agricultural appropriations that support the land-grant mission.

The UC delegation met with staff from 27 congressional offices via Zoom to discuss the many critical agriculture needs facing California and the nation. They explained how UC is at the forefront of conducting research to understand and solve problems facing the agricultural industry and encouraged Congress to provide the highest possible funding levels in FY 2022 and FY 2023.

“This year, our request included something new – $365 million for agricultural research infrastructure,” said Anne Megaro, UC ANR director of government and community relations. “We have been working with Congress to include significant infrastructure funding in President Biden's Build Back Better legislation, and we are continuing to make this request through annual appropriations.”

Bringing UC's facilities up to modern standards with necessities such as high-speed broadband would provide capacity for cutting-edge research such as precision agriculture, remote sensing and growing space for CRISPR-based research. It would also ensure that U.S. research can continue to meet the agricultural and natural resource needs of the nation.

“Our local UCCE advisors have given so much to our communities up and down the state; this is just one way I like to give back in support of their efforts. Congress needs to know how valuable ag research and education is, and how much we trust and depend on UC,” said Herrera, California Forward director of regional stewardship.

Missy Gable, UC Master Gardener Program director; Ryan Tompkins, UCCE forestry and natural resources advisor for Plumas and Sierra counties; and Jairo Diaz, director of Desert Research and Extension Center shared examples of their work throughout the state to adapt to living with wildfire, climate change and drought, and to improve Californians' health and wellness.

“As an extension forester, wildfire not only drives our applied research, but also affects the communities we live in and serve,” said Tompkins. “CARET provides opportunities to share real-life experiences of how federal funding supports UC forest and wildfire research, outreach, and education that have meaningful benefit for communities throughout California.” Lindcove Research and Extension Center is accepting research proposals until May 27.

Located in the foothills of Tulare County, LREC has land, labor and facilities available for 2022-2023 research projects. The Research Advisory Committee reviews proposals, and projects are evaluated based on scientific merit and regional need. While LREC is primarily a citrus research center, avocado and walnut trees are also grown there, and other crops are welcome.

For questions regarding land, labor or facilities, contact Kurt Schmidt, superintendent, at (559) 592-2408 Ext 1153 or krschmidt@ucanr.edu.

For information on submission of proposals, contact Jasmin Del Toro, business officer, at (559) 592-2408 Ext 1151 or jzdeltoro@ucanr.edu. The UC Sierra Foothill Research and Extension Center is soliciting proposals to support new and continuing research on rangeland and oak woodland ecology and management, beef cattle health, production and management, as well as related agricultural and natural resource themes important to California.

Basic resources and facilities to support research include 5,000 acres of northern Sierra foothill oak woodland–annual grass rangeland as well as irrigated pastures, riparian areas and access to the Yuba River. An approximately 160 head cow-calf herd and access to up to 300 head of steers/heifers to support animal production, animal health and grazing research is also available. SFREC maintains a dry lab for sample processing and a dormitory as well as large and small conference rooms.

Proposals may be submitted through the REC Manage System via the SFREC website: https://sfrec.ucanr.edu/Research/proposal. For full consideration, please submit your proposal by May 9, 2022.