Look out, Kermit! There’s a plague of invasive frogs and they’ve got big appetites.

American Bullfrogs (Lithobates catesbeiana) arrived in California at least 100 years ago and are now widespread. Bullfrogs eat just about anything, such as other frogs and bullfrogs, toads, snakes, turtles, birds and mice. In fact, California Department of Fish and Wildlife found a young coho salmon inside a bullfrog! And they’re blamed for causing the decline of native western red-legged and yellow-legged frogs by eating and outcompeting them.

African Clawed Frogs (Xenopus laevis) were used worldwide for human pregnancy tests in laboratories during the 1940’s and 1950’s. When newer technology arrived, the frogs were released. Some that were kept as pets were released when owners no longer wanted them or they simply escaped from home aquaria. African clawed frogs can tolerate salinity, low oxygen, silt, pollution and both acidic and alkaline waters (pH 5-9). When ponds dry up in the summer, they can estivate in the mud for up to 8 months and can go without food for up to a year.

African clawed frogs can reach 5 inches long and they have claws on the three outer toes of their front legs. They are voracious and prefer aquatic insects, but they will eat fish, other amphibians (including their own kind), birds and even decaying debris. The African clawed frog can reproduce by the age of 6-10 months and a female can produce 27,000 eggs each season. Their ability to escape predators, secrete toxins and resist infections enables them to live up to 10-15 years in the wild.

So, if these “ribbiting” invaders are already widespread, why are we writing about them? Their stories show how important it is to avoid releasing aquarium pets or schoolroom animals into the wild, where they can spread and harm native species. 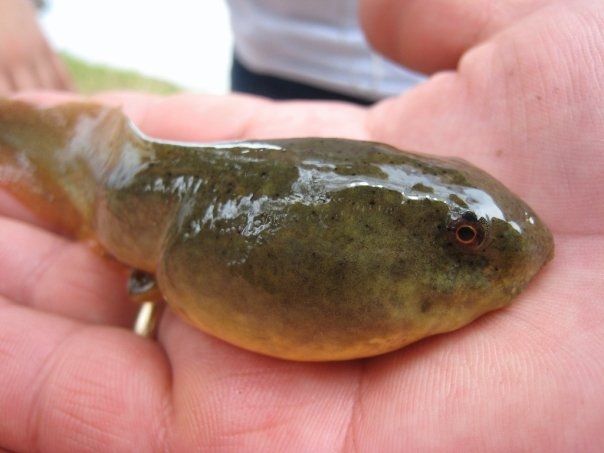