This icky sounding aquatic invader threatens tourism, fisheries and even hydropower facilities that depend on our streams and rivers. Why?

Rock snot, aka didymo (Didymosphaenia geminata), is a one-celled alga or diatom. Each tiny didymo grows a gelatin-like stalk it uses to attach itself to rocks, plants and just about any available surface under the water. Didymos reproduce by dividing and so do their stalks, eventually creating a branching network that feels like wet cotton or wool. Thus, the problem...

Didymo can “bloom” (grow to very large numbers) and accumulate in large globs that look slimy, hence the name “rock snot.” Check out the USDA National Invasive Species Information Center for a video of a New Zealand stream with masses of blooming didymo.

Blankets of didymo can reach 8 inches thick, smothering mayflies, stoneflies, caddisflies and other native, bottom-dwelling aquatic life that are food for fish and birds. Didymo mats also foul spawning grounds for salmon and trout and interfere with water flow. Pennsylvania’s “Aquatic Invasive Species (AIS) Action Plan: Didymo” has a nice summary of didymo’s natural history and the harm it causes.

In California, didymo is found in the Sierra Nevada mountains, the north-central part of the state, and the south fork of the American River. Scientists thought for many years that didymo lived only in clean, cold-water streams and rivers. New research has found that it can tolerate water as warm as 80∘ F and it grows faster when nitrogen and/or phosphorus levels rise. This means that didymo is also a threat to streams and rivers at lower elevations and in warmer climates.

How does didymo spread to new streams and rivers? Like many aquatic invaders, didymo hitches a ride with people. It can survive at least 40 days in cool, damp and dark conditions. So, didymo spreads easily on fishing tackle, neoprene waders and wetsuits, compartments on boats and other gear, felt soles of wading boots, clothing and even the family dog.

What can you do to avoid spreading didymo to new streams and rivers? Start with the slogan, Check, Clean, Dry! In other words, before you leave a site, CHECK your gear, clothing, the dog’s feet, truck tires if you forded the stream, etc. for obvious (and hidden) clumps of algae and leave them there. If you find any algae globs later, dry them and soak them in bleach for at least 4 hours. CLEAN your gear, waders, etc. by soaking and scrubbing for at least 1 minute in hot water, 2% bleach solution, antiseptic hand cleaner or dish detergent. Such cleaning is not practical for livestock and pets. So, let them (and your scrubbed gear) DRY completely and then wait another 48 hours before allowing them to contact or enter any other waterway.

Anglers, boaters and people who work in and around rivers and streams can be an early warning system for didymo both in cold-water streams and rivers, as well as in warmer and more polluted waterways. If you think you have seen didymo or “rock snot” report it to CA Department of Fish and Wildlife. See our “Rat on Aquatic Invaders” blog for instructions on how to report sightings of aquatic invasive species.

Scientists, fly-fishers, tribal agencies, conservation groups and others met in 2006 to document the problems didymo was causing and recommend action. The excellent White Paper they published in January 2007, a map of didymo locations, and a rough guide for field identification are available from US EPA Region 8. 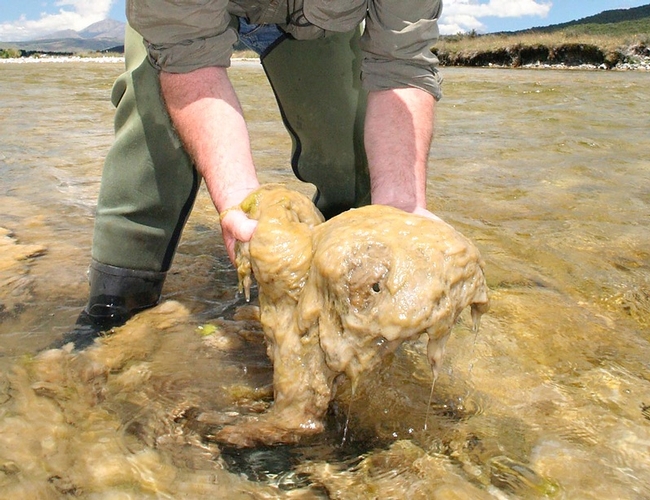