Sanchez honored as a White House Champion of Change
Published on: November 2, 2015 Jesse Sanchez
This past Monday, October 26th, Jesse Sanchez, the farm manager at Sano Farms out west of the small town of Firebaugh, was honored in Washington, D.C. as a White House Champion of Change. Along with eleven other farmers, researchers, and industry leaders from around the country, Jesse was recognized as part of the most recent White House Champions cohort for his contributions to sustainable and climate-smart agriculture. This extremely prestigious acknowledgment that honors “everyday Americans who are doing extraordinary things,” is a very fitting recognition of the outstanding contributions that this humble, soft-spoken pioneer has made to improved tomato farming systems here in the San Joaquin Valley.

Working closely with Alan Sano, the farm's owner, over the past ten years, Jesse has developed highly efficient production practices for the roughly 1500 acres of processing and fresh market tomatoes that employ the use of off-season cover crops to add carbon to the soil to improve tilth as well as water storage and movement in the soil, and also, the use of a form of reduced tillage that is called strip-tillage. In this reduced disturbance system, Jesse tills only in the center of his beds in a narrow line where his tomato transplants are placed. This approach to tomato farming has reduced fuel use and emissions resulting from diesel fuel burning compared to what is done traditionally, increased organic matter in the soil, and saved the farm roughly $100 per acre since they started making changes to their customary practices. Overall, the system that Jesse has refined attempts to emulate the type of natural system farming that his grandfather used back in Mexico when Jesse was a boy.

The evolution of these climate-smart systems at Sano Farms first began when Jesse installed subsurface drip irrigation tape in his tomato fields. This method of irrigating is very precise and enables Sano Farms to precisely apply small amounts of water to their tomatoes as needed. Because the plastic drip tapes are permanently buried in the centers of the farm's planting beds, Jesse, along with other tomato farmers in the past fifteen or so years, have begun to use minimum tillage approaches that work the soil shallowly without disturbing the buried drip tape. It was soon after Jesse first installed drip tape that he began his current quest to improve the health of his soil through the use of cover crops and strip-tillage. In addition to the improved economic and efficiencies that have been achieved by the farming techniques that Jesse has developed for this tomatoes, there have also been smaller, yet no less important benefits that both he and Sano have seen with their new practices. One evening a few years ago, in hosting a visiting no-till farmer from Pennsylvania at their farm one evening, Jesse and Alan were both beaming with joy in finding an earthworm in a shovel-full of soil that they had dug up while looking at changes in soil properties. “This is the first worm I've seen in thirty years,” exclaimed Sano upon finding it.

Jesse Sanchez has also been a very generous and passionate promoter of the system that he's developed at Sano Farms. Over the years, he has hosted a variety of tours for San Joaquin Valley farmers, and also for farmers from as far away as Mexico, Brazil, China, and Afghanistan. He is very committed to the conservation agriculture systems that he has been working to develop and explains that farmers like him “can do an awful lot of conservation and help many people in local communities with jobs as long as we have water.” This past week's honor that comes with Jesse Sanchez being recognized as a While House Champion of Change is a truly fitting acknowledgment of one of our Valley's great pioneers.

The movement toward conservation tillage seems to fit right in with two other farming industry trends - pinching pennies and protecting the environment, according to an article in the September-October 2010 Grower magazine.

In addition, a rising number of California processing-tomato growers and some fresh-market tomato growers also use a form of minimum tillage, often to avoid damaging drip irrigation tape, Mitchell said.

The article profiled ranch manager Jesse Sanchez of Sano Farms in Firebaugh, Calif., who introduced strip-tillage for the company’s fresh and processed tomatoes about six years ago.

“I’ll never go back to conventional,” Sanchez was quoted in the story. 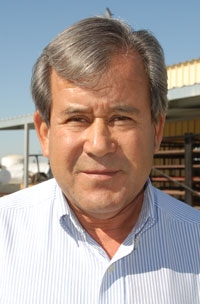 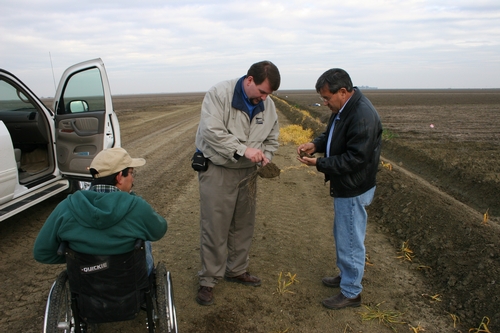