California's Conservation Agriculture Systems Innovation (CASI) Center was recognized as the recipient of the 2022 Conservation Innovation Award by the Soil and Water Conservation Society at their Annual Conference held in Denver, CO from July 31 through August 3rd 2022.  Tom Willey, retired organic farmer in Madera, CA and long-time CASI member received the award on behalf of our entire group and also presented a summary of work currently being done by a group of California organic farmers on reduced disturbance systems.  The 2022 Award recognizes many years of dedicated service that CASI members have provided in extending information and increasing the adoption of improved performance production systems in California since 1998 when the organization was founded.  Tom also had the opportunity to meet USDA NRCS national Chief Tom Cosby at the Denver conference and he invited the Chief to meet with CA CIG Project organic farmers when he is coming to the state in September 2022. 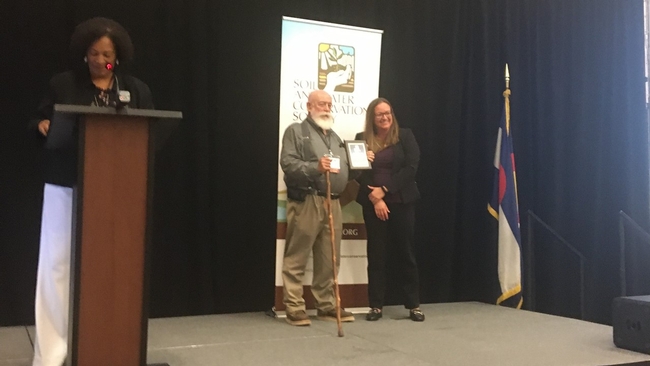 Douglas Gayeyon, storyteller and creative force behind the Lexicon of Sustainability (https://www.thelexicon.org/) spent the better part of May 20, 2022 interviewing and photographing Scott and Brian Park of Park Farming in Meridian, CA and Paul Muller of Full Belly Farming in Guinda, CA as part of a book that he is working on that is going to be about regenerative agriculture.   He had been trying to work with the Parks and Muller for quite some time due to the reputations they have for being progressive farmers who have been putting great efforts into further improving their already outstanding farming systems.  The Parks, Muller and Andrew Brait at Full Belly are part of a broader group of California farmers who over the past three years have been exploring opportunities for reducing soil disturbance in their organic vegetable production practices.  While at Park Farming, Gayeton photographed Park showing a variety of innovative equipment that he has created and acquired over the years, an organic carrot seed production field, a cover crop roller trial, and an elaborate demonstration field where the Parks are evaluating nine different types of reduced disturbance systems for tomato production.  With Muller at Full Belly, he photographed Muller in one of his no-tillage fields and also captured images of Muller in an orchard where grazing sheep roam.  Gayeton will return to capture additional photos of the Parks' equipment fabrication shop in the near future. 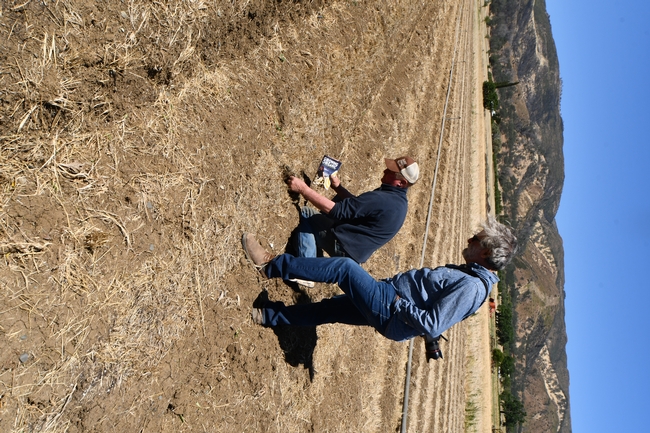 CASI's Jeff Mitchell was invited to meet with eight researchers of the Rothamsted Research facility in Great Britain as part of a research exchange program organized by the College of Agriculture and Environmental Sciences at the University of California, Davis along with several other campus researchers on March 17, 2022.  Rothamsted Research is the longest-running agricultural research institution in the world.  Its foundation dates from 1843.  The exchange was hosted by the Global Exchange Office at UC Davis and involved individual presentations and follow-up discussions between UC Davis researchers and the Rothamsted Research visitors.  Mitchell was asked to present a discussion on the topic of "Cooperative Extension in California" and shared several aspects of our CASI Center as well as the historical background of Cooperative Extension, the land-grant university, and the agricultural experiment station system in the United States. 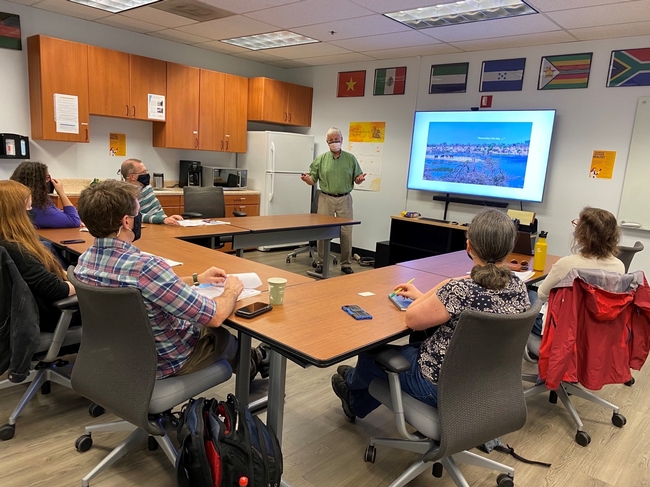 Expert weed ecologist, Dr. Anil Shrestha, of Fresno State's Department of Viticulture and Enology, has begun two exhaustive investigations of weed prevalence and diversity at the organic farm of USDA NRCS CIG Project farmer member, Phil Foster.  The study involves four cover crop treatments that include Merced rye, Pacheco triticale, Phil's 'go to' mix of Phacelia, millet and faba bean, and the SJV morning glory suppression mix of Cary Crum that other CIG farmers are also trying at their farms.  Each cover crop is laid out in fifteen-foot wide strips that are replicated throughout the field three times.  Shrestha took his first set of data on February 3rd at the Santa Ana ranch study site and plans to return in two weeks for additional observations there as well as at Phil's San Juan ranch location where a similar replicated study is underway.  Suffice it to say that ample very interesting data will stem from these monitoring efforts and that even in the initial sampling there seemed to be rather striking differences between the cover crops in terms of weed counts.  A plot plan of the study that Phil prepared and a short video clip of the sampling methodology used by Dr. Shrestha are provided below.  A link to a You Tube link of the video of Dr. Shrestha's sampling technique is provided here as well. 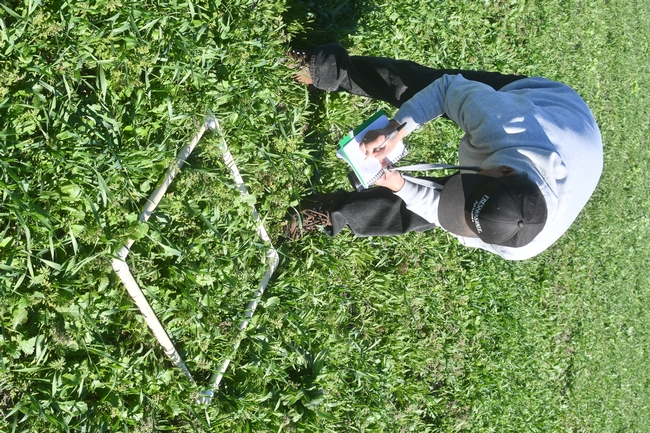 Undergraduate student, Jennifer Valdez-Herrera, took home the first prize award in this year's student poster competition of the California Weed Science Society that was held January 19th - 21st at the Hyatt Regency Hotel in Sacramento, CA.  Her poster titled, Potential of roller-crimper technology for weed suppression in annual crops, reported on the first four years of a study that has been conducted on the Fresno State campus under a center pivot irrigation system.  The rolled cover crops are followed by strip-tillage planted silage corn.  Five mixes, rye, an ultra high diversity mix from Green Cover Seed in Bladen, NE, a multiplex mix from Lockwood Seed and Grain in Chowchilla, CA, a faba bean and Phacelia combination, and a three-way mix of rye, peas, and purple vetch are replicated three times in about 300 foot strips throughout the field.  A copy of Valdez-Herrera's poster is provided below and a short 56-second video showing the current stage of growth of the 2021 - 2022 cover crops may be seen at 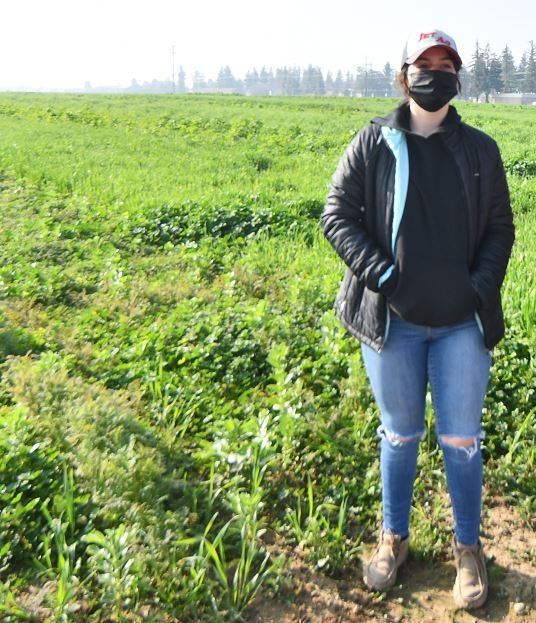 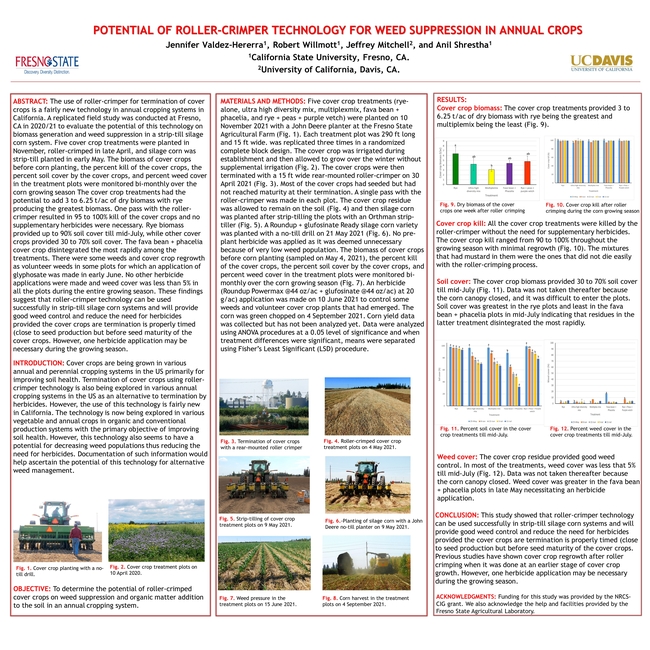