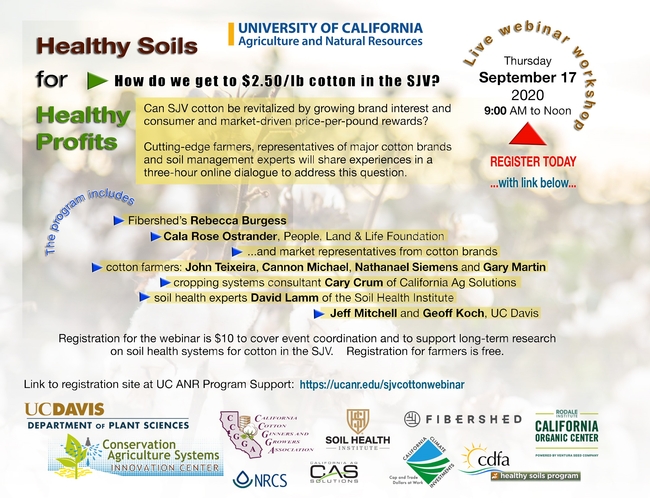 Information on the dynamics of long-term use of winter cover crops in California's San Joaquin Valley will be shared with online participants as part of the Desert Southwest Soil Health Webinar (https://www.eventbrite.com/e/desert-southwest-soil-health-webinar-tickets-107732693386), slated for July 23rd from 8 AM through 6 PM.

“This will be one of the first outlets in which we'll share our 20-year findings on both the costs and benefits of using cover crops to improve agroecosystem biodiversity and the efficiencies of the C, N, and water cycles in SJV annual cropping systems,” says UC ANR's Jeff Mitchell, whose presentation on conservation agriculture falls in the 10:30 AM – 3:00 PM “Practices to improve soil health,” slot on the day-long program.

Mitchell will describe how over the course of the project that was characterized by recurring drought, a total of 37 tons of aboveground cover crop biomass representing 1580 lbs N and 14.8 tons C per acre was produced with a total precipitation of 127 inches and 16 inches of supplemental irrigation in that was applied in four of the years. These inputs averaged 3,695 lbs of organic matter or 0.79 tons of C annually. Year-to-year variability was quite large ranging from 8,818 lbs OM in 2000 when supplemental irrigation was applied, to 54 lbs/ac in 2007 when, as in most years, no irrigation was applied to the cover crops. The cover crops were typically seeded by November 15 and terminated around March 15 of the following year accounting for a growth period of 120 days capturing solar energy by the “green ground cover”, and living roots in the soil for about 90 additional days during the year relative to the standard practice system which was bare during this time. Based on cover crop growth during years when supplemental irrigation was applied, Mitchell estimates that an average of 6,082 lbs of dry cover crop biomass might have been produced with a modest input of 2 inches of water. Even greater amounts of cover crop biomass – approximately 12,000 lbs of dry matter per acre as is typically achieved with winter silage triticale crops in SJV dairies - could be produced were cover crops “treated more like cash crops” with additional supplemental strategically timed irrigation in a cropping system as in other regions of the US. He'll also be showing participants via recorded video clips just how this sort of sustained cover crop use improves key soil health indicator properties and function.

CCA and PCA credit for the online webinar have been requested.

New data on cover crops to be presented July 23rd!

Even on the west side of the San Joaquin Valley, where average rainfall is a mere 7 inches per year, farmers can reap the benefits of winter cover crops without the expense of irrigation, University of California research has found. Growing a winter cover crop helps retain soil nitrogen – keeping it from leaching into groundwater – improves water infiltration, reduces runoff, increases soil organic matter and boosts long-term soil fertility.

Moreover, a vigorously growing cover crop can smother winter weeds, reducing or eliminating the need for herbicides or tillage between crops.

“Despite the many and varied benefits of cover cropping that are increasingly seen by farmers in other parts of the country, the vast majority of Central Valley farmers currently do not use them,” said Jeff Mitchell, UC Cooperative Extension specialist in the Department of Plant Sciences at UC Davis. Mitchell, a cropping systems expert, is based at the Kearney Agricultural Research and Extension Center in Parlier, Calif.

The costs and benefits of winter cover crops are being examined in an ongoing trial at the UC West Side Research and Extension Center in Five Points, Calif. Initiated in 2000, the trial is led by Mitchell, William Horwath, a professor in the Department of Land, Air and Water Resources at UC Davis, and Dan Munk, UC Cooperative Extension advisor in Fresno County, a cotton and soils expert.

“When water is short, as it has been in many recent years, farmers wonder how inserting an extra crop that doesn’t bring an immediate return on investment makes sense,” Mitchell said. “But our work over the last 12 years has demonstrated that cover cropping ‘on the cheap’ – relying only on rainfall for irrigation – supplies many benefits and doesn’t cost much.”

Rainfall during the November to March winter growth period in Five Points averages 7 inches, slightly less than the 30-year average annual rainfall of 7.6 inches for the site. Winter rainfall has varied considerably during the trial, from a low of 2.9 inches in 2003 to a high of 11 inches in 2006.

Tillage radish is a large-rooted winter annual being marketed for its ability to improve soil condition. It’s thick, tuberous roots break up the soil surface. When it is killed in the spring and the roots decompose and shrivel, it leaves behind channels that help with aeration and water infiltration.

The timing of rainfall was also important. Rain is needed early to establish the crop and late in the season to sustain its growth when the temperature warms.

Over time, growing cover crops results in a significantly higher amount of carbon in the top foot of soil. Following eight years of cover cropping, soil carbon values in the standard tillage cover crop system, in which the cover crop was treated as a green manure and incorporated into the soil at a depth of 10 inches, was 12.2 tons of carbon per acre. Where cover crops were combined with conservation tillage, the researchers measured 12.8 tons per acre. In areas managed with conservation tillage and no cover crop, 11.7 tons per acre of carbon was in the top foot of soil. Under standard tillage and no cover crops, currently the common practice in the San Joaquin Valley, soil carbon came in at 9.9 tons per acre.

In addition to improving soil quality, farmers are investigating whether storing extra carbon in the soil will make them eligible for selling carbon credits under California Assembly Bill 32, the Global Warming Solutions Act.

“Sequestering carbon in farmland could be a means of mitigating global warming from greenhouse gas emissions,” Mitchell said. “We are working with farmers to develop a record of performance so they can document their potential for storing more carbon using conservation tillage and cover crops.” 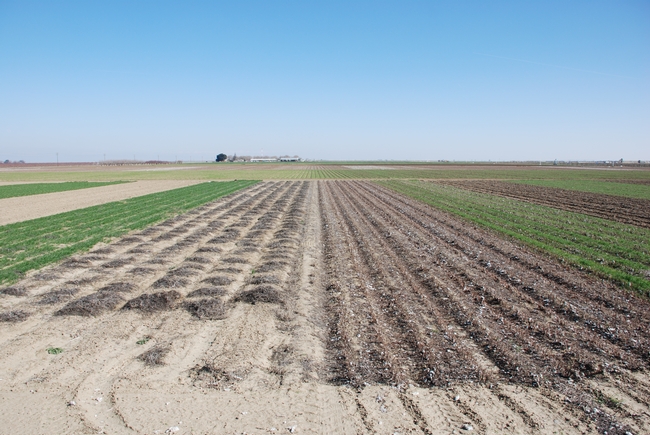 Experimental field in which conservation tillage with and without cover crops are being compared to standard tillage systems.
Tags: cover crops (5)
Comments: 0
Cover crops: What goes around comes around
Published on: April 4, 2011

Cover crops, or vegetation that was grown after the cash crop was harvested, was a practice that was widely used in the 1940s and 1950s.  The vegetation was used to maintain or increase the fertility of the soil before commercial fertilizers became widely available. The cover crops also provided organic matter to the soil that was necessary to keep the soil easy to plow. When commercial fertilizers became more widely used, cover crops faded from the agricultural picture.

Cover crops are making a comeback of sorts due to the depletion of the organic matter over the intervening decades of intense farming as well as farmers taking advantage of a cover crop’s environmental benefits. A winter cover crop can add back to the soil the organic matter that was lost due to farming practices as well as take up the fertilizer left over from the previous crop that can potentially leach into the ground water or runoff in storm water. A well-managed cover crop can also provide needed protection from raindrop impact that can cause a crust to form on the surface of the soil that further reduces water penetration and adequate air movement through the soil. The vegetation can also keep soil moisture from evaporating when young crops need it most.

To help farmers learn more about the “lost art of cover cropping” and to see actual cover crop management techniques up close and personal, the University of California’s Conservation Tillage and Cropping Systems Workgroup conducted an interactive field day on March 18 at the West Side Research and Extension Center in Five Points, Calif. The session came on the heels of a three-day conference series the previous week that provided examples of successful high-residue cropping systems that also use cover crops from other irrigated regions of the U.S.

The backdrop for the field day was a field that has been comparing no-till cotton and tomato production techniques for the last eight years.  Comparisons between crops grown with and without winter cover crops have been measured against current standard “clean cultivation” management in which no cover crop is used.  Also compared was a standard tillage system in which winter cover crops are “green manured” or incorporated into the soil in the spring before the next crop is planted.

From year to year, the water available for agriculture can vary greatly so cover crops must be able to “work their magic” with little or no increased water requirements. Because wintertime temperatures are lower and the humidity is generally higher, evapotranspiration (ET) - or the water that both evaporates from the soil and water that is used by plants - during the winter growing period tends to be much lower than in summer.  However, a winter-growing cover crop is using water that would normally be available to a spring-planted crop. Therefore, farmers need to weigh the many advantages of a cover crop with the potential disadvantage of its winter water use.

Mitchell’s monitoring of the top foot of soil three days before the field day indicated about 3 inches of water in the fallow plots with only about 2.5 inches in the cover crop plots.  The cover crop that Mitchell used this year consisted of Tillage Radish™, forage pea, and Phacelia, and had produced about 7,000 pounds of dry matter per acre at the time of the field day.

Additional information on cover crops will be posted at the Workgroup’s website http://ucanr.org/sites/ct/ and opportunities for viewing other field operations related to cover cropping will be publicized via the Workgroup’s email announcement service. To become involved with the Conservation Tillage and Cropping Systems Workgroup, contact workgroup chair Jeff Mitchell at mitchell@uckac.edu.