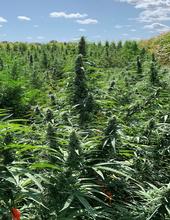 The research project is part of a...

The center pivot system at the UC West Side Research and Extension Center before crops were planted.

“Corn silage and alfalfa have traditionally used lots of water and current and future water restrictions are forcing many farmers to rethink their forage production strategies,” said

Good news for dairy cows. Science has found a way to produce alfalfa with less lignin, a component of the plant that has no nutritional value. The new alfalfa variety – genetically modified in a way that puts brakes on the lignin-producing gene – was deregulated by USDA in November.

“In general, a reduced lignin trait in alfalfa is very welcome,” said Dan Putnam, UC Cooperative Extension specialist in the Department of Plant Sciences at UC Davis. “The low-lignin trait has some interesting potential implications for dairy cows and other ruminants, as well as for yield, agronomic...

During the 2000s, organic milk production was one of the fastest growing segments of organic agriculture in the United States, according to a USDA Economic Research Service publication Characteristics, Costs, and Issues for Organic Dairy Farming. In 2008, about 3 percent of the nation's cows were managed organically.

Among the conditions necessary for a cow to produce organic milk, she must eat only organic feed or browse on organic pasture for at least the previous 36 months. However, dairy producers have found that producing or sourcing organic feed – which must be grown with no synthetic fertilizers, insecticides or herbicides – is...

California’s role as an emerging world leader in the development of green energy technologies offers the state’s farmers the opportunity to diversify their cropping systems and increase their income.

Sacramento lawmakers have given the California Energy Commission an annual budget of $100 million to support the development of alternative and renewable low-carbon fuels. In addition, the State Alternative Fuels Plan set goals of reducing petroleum dependence by 15 percent and increasing alternative fuels use by 20 percent by 2020. These efforts are meant to help meet the growing fuel demands of the world population while reducing greenhouse gas emissions in California to 1990 levels.

“With the new mandates, there are new...