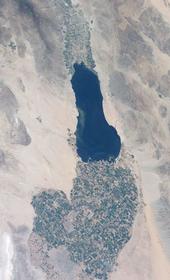 Soil is an often overlooked tool to fight drought.

A team of University of California scientists recently received a $1.69 million grant to use several UC agricultural research stations to study an often overlooked tool to fight the drought: soil.

The team, led by Samantha Ying, an assistant professor of environmental sciences at UC Riverside, received the grant from the University of California Office of the President.

The funding will allow for the establishment of the University of California Consortium for Drought and Carbon Management (UC DroCaM), which will design management strategies based on understanding soil...