Mid-summer wine and grape tasting at Kearney
Published on: August 16, 2012 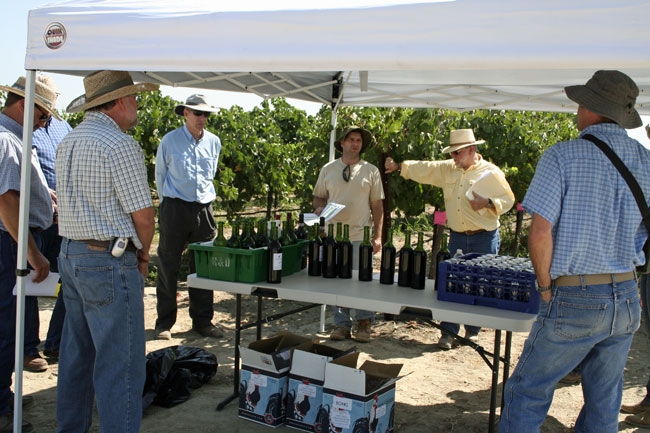 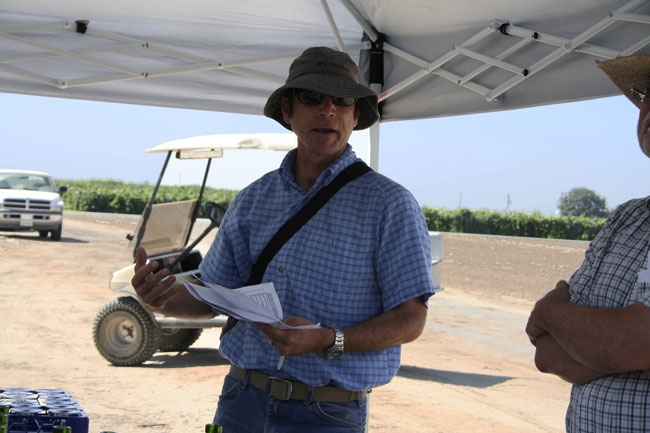 If a superb winegrape cultivar adapted to warm temperatures emerges from a research trial at the UC Kearney Agricultural Research and Extension Center, the state’s premiere agricultural region may be able to establish a reputation for growing fine wines.

For this reason, UC Cooperative Extension specialists in the Department of Viticulture and Enology at UC Davis have teamed up with winemakers from Constellation Brands to identify a wine variety that excites the palette and flourishes in the San Joaquin Valley’s hot climate.

At the outset, the researchers were searching for blending varieties that would make San Joaquin Valley wines with familiar names more interesting. Vintners may use up to 25 percent of the grape volume to impart distinctive color, flavor, and structure to a varietal wine without calling it a blend. The winegrapes being studied at Kearney, the researchers believed, could add a certain flavor note or deep color to a San Joaquin Valley Merlot, Cabernet Sauvignon, or Chardonnay.

Moreover, changing demographics may present opportunities for new varietal wines, especially for the newest generation of potential wine drinkers, the generation known as “millennials,” only about half of whom have turned 21.

“We have a group of wine consumers coming through who are more accepting of different varieties than their parents were,” says James Wolpert, UC Cooperative Extension specialist in the Department of Viticulture &  Enology at UC Davis. “We are poised to have a real renaissance in the wine business.”

Currently, 80 percent of California wine is made from fewer than 10 types of winegrapes. Most of the popular wine varieties in California – among them merlot, cabernet sauvignon and chardonnay – are at their best in somewhat cooler climates. The researchers are looking for grapes that make superior fruit in warm climates.

“You wouldn’t plant a palm tree in Michigan. So why would you plant merlot in the desert?” asks Oren Kaye, a research and development winemaker at Constellation Brands. “The San Joaquin Valley has never established itself as a ‘destination’ wine region because we have always been chasing the wrong grapes.”

The unsuitability of California’s most popular winegrape cultivars to the Central Valley’s climate is reflected clearly in industry statistics. The San Joaquin Valley is California’s largest grape growing district in terms of production, but lowest in terms of price. According to the California Department of Food and Agriculture 2011 Grape Crush Report, District 13 – which includes the counties of Madera, Fresno, Alpine, Mono, and Inyo; and parts of Kings and Tulare counties – had the largest share of the state’s crush, at 1,495,027 tons. District 13’s average price per ton in 2011 was $324.26. In contrast, the value of the crush in District 4 – Napa County – was $3,258.88 per ton.

Matthew Fidelibus, UC Cooperative Extension specialist in the Department of Viticulture and Enology at UC Davis, attributes the 10-fold price differential in part to the impact of weather on particular winegrape varieties. In grape varieties adapted to a cooler climate, some biological pathways are stifled at elevated temperatures. As a result, some important flavor compounds develop out of sync with sugar accumulation, and the grapes may not attain their potential flavor peak before it is time to harvest.

Anthocyanins, for example, give red wines their characteristic deep scarlet to purple color, but high temperatures suppress anthocyanin accumulation in some varieties.

“We would like to identify a winegrape in which anthocyanins accumulate at higher levels in San Joaquin Valley,” Fidelibus says. “We have no problem getting enough sugar in the grapes. But other desirable compounds may be deficient.”

FPS enables grape growers, nurseries, researchers, and wineries to bring valuable new selections into the U.S.  without the threat of importing foreign exotic pests and diseases that could cause serious damage to the industry. From 1995 through 2006, over 640 new selections were imported.

Wolpert, the Kearney project’s initial principal investigator, selected 55 winegrape cultivars from Spain, Greece, Italy, and other areas where the climate is similar to the San Joaquin Valley’s.

It used to take 15 years to bring in new varieties,” Wolpert recalls. “FPS got that down to five. They have stuffed the pipeline full of interesting grapes, some you cannot find on the East Coast (of the U.S.).

The varieties chosen for the project are not exactly “new,” Wolpert clarified. Some are 1,000 years old, but are new to California.

Fidelibus, now the principal investigator on the grape production side, is gathering data on each variety’s yield potential, cluster architecture, amenability to mechanization, and other viticultural characteristics. The research vineyard contains 50 vines of each variety on 1103P rootstock. The rootstock was planted in 2008 and was budded to 55 varieties in spring 2009 with some re-budding in 2010. Vines were trained to bilateral cordons on trellises with a cordon wire 48 inches above the soil surface, and two foliar catch wires on a 10-inch wide cross arm, about 15 inches above the foliage catch wire.  Vines were drip-irrigated, at about 60 percent ETc, and spur-pruned with approximately 15 shoots per meter of cordon.  They were allowed to retain their entire crop, which ranged from 2.3 to 33 kg of fruit/vine, depending on the variety.

Constellation Brands winemaking personnel are monitoring the winegrapes’ potential to produce distinctive, flavorful California wines. Of the 55 Old World winegrape varieties planted in the 1.4-acre plot at Kearney, about half displayed enough promising characteristics in 2011 to prompt Constellation Brands to make 25 small (10-gallon) lots of wine from 150 to 200 lbs of grapes.

From the winemakers’ standpoint, the next great California wines will need excellent color, superior mouthfeel, no vegetative characteristics, desirable flavors, and importantly, an elusive quality that marketers call “cachet.” Cachet is a certain, unmeasurable aplomb that confers a special status or prestige on which to build a reputation.

The Kearney wines are on the right track.

"Many of the wines turned out better than we expected," Fidelibus said. "A lot of the reds had very good color, better color than some of the traditional varieties. Some of the whites hadhigh acidity,which is a good quality for the San Joaquin Valley because high temperatures tend to reduce acidity."

At a recent tasting in Fresno, Kaye introduced winegrape growers and industry representatives to four wines made from grapes in the Kearney plot, Fiano, Biancu Gentile, Sagrantino, and Marselan Noir. Even though wine was produced in small lots and the winemaking process was not optimized, the wines have piqued the researchers’ interest.

Fiano is a white wine with a fresh, young style evoking flavors of melon and grapefruit,” Kaye says. Marselan noir is a stylistically unique red wine with bright cherry flavor that pops.

"In our internal tastings, these wines and several others showed some promise, but it is too early to know for sure,” Kaye concludes. "Constellation Wines will vet 20 to 30 varieties again in 2012. Some will be repeats. If we can eliminate half of the varieties that is progress as it will help us focus on the ones with greater potential for the San Joaquin Valley."

Fidelibus comments in the video below about the recent tasting event that featured four winegrape varieties from the Kearney trial: