Celina Villanueva likes to shop for bargains without sacrificing quality. With a growing family of five to feed she is extremely cost-conscious.

“I look for the best product at the best price…I am loyal to products that I like and I recommend those that I like to my friends,” said the Peruvian native while shopping at a warehouse bulk store in Norwalk, Connecticut.

She is one of 28 million Hispanic females living in the U.S. who are gaining in consumer power and influence. According to new data, Latinas like Villanueva are in the driver's seat of...

Spending growth by Hispanics outpaced that of other demographic groups in Houston between 2009 and 2014, a researcher on Wednesday told some 450 business professionals interested in learning how a growing Latino community is shaping the city's economic and political spheres.

"We want to make sure that Houstonians understand that Hispanics are spending billions of dollars in this city," added Laura Murillo, president and CEO of the Houston Hispanic Chamber of Commerce.

Consumer spending among Houston's Hispanics increased 44 percent to $52.75 billion in 2014 and is expected to top $175 billion by 2034, according to data presented by Mitzi Fleissner, research director for Telemundo Houston.

A new analysis of recently available Census data finds that businesses owned by Hispanics are being created at a significantly faster pace than ‘total' businesses in the United States, California and the Inland Southern California region – bucking a trend of diminished business formation during the recession and post-recession years.

The study, released today by the UC Riverside Center for Economic Forecasting and Development at the School of Business Administration, examines data from the U.S Census Bureau's newest Survey of Business Owners, which is published once every five years and provides the most current snapshot of the nation's... 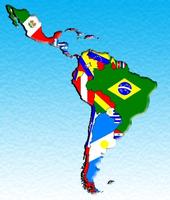 According to an article from the Center for American Progress, Latin America is slowly emerging as an important market and key player in the global economy as the U.S. Hispanic community grows. Many Latin American economies weathered the global economic crisis better and emerged faster than the United States. Central and South America's gross domestic product grew 6 percent in 2010, and it is expected to grow 4 percent in 2011. Chile and Brazil have increasingly formed investment and trade links with China. Chile's trade with China is now more than double its trade with the United States, and China also has overtaken the United States as Brazil's top...