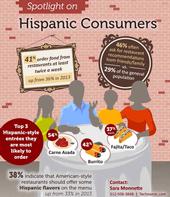 The growing U.S. Hispanic population is shaping the foodservice industry, according to Technomic research.

​By 2060, Hispanics are expected to make up nearly 30% of the total U.S. population. As this demographic grows, so too will its impact on the foodservice industry. Technomic's Hispanic Foodservice Consumer Trend Report explores how this consumer group has and will continue to shape foodservice as their usage grows.