Americans less concerned than a decade ago over immigrants’ impact on workforce
Published on: October 17, 2016

These attitudes have changed...

From 2020 to 2034, about 14 million new jobs will be created in the United States and 75 percent of them—approximately 11 million—will be filled by Hispanics.

In the nearer future, over the next five years, Hispanics are expected to fill 40 percent of all new jobs.

A wave of baby boomer (people born between 1946 and 1964) retirements, and a younger faster-growing Hispanic population are driving those numbers, according to a new report from the research group IHS Economics.

“People think Hispanics are going to take three of every four jobs but a lot of what's... 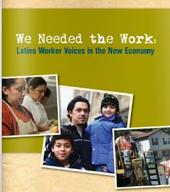 Many low-skilled Latino workers, who make up a large share of the low-wage job market, are employed in substandard jobs where they earn below-poverty wages, are denied health and retirement benefits, and are refused paid leave, according to a study by National Council of La Raza (NCRL).

Latinos currently make up 15 percent of the U.S. workforce and are estimated to become 33 percent of the total population by 2050—they are the largest and fastest-growing segment of the American workforce. Latino workers fuel vital American fields, making up one in five workers in the food manufacturing and services,...