'Super Sleuth' Solves the Mystery of the Dead Bees
Published on: January 22, 2015

Originally published on the Bug Squad Blog on January 19, 2015 Did the cold spell have something to do with this? But why would honey bees be outside their colony? Honey bees don't fly until the temperature reaches around 55 degrees.

Super sleuth Extension apiculturist (retired) Eric Mussen of the UC Davis Department of Entomology and Nematology, arrived on the scene. He was appropriately dressed in a trenchcoat, a la Sherlock Holmes (Note that Sherlock Holmes, aka physician Sir Arthur Conan Doyle, was a beekeeper, too, according to Wikipedia). Bee colony could be "up there," on or near the roof. (Photo by Kathy Keatley Garvey)
Yes, dozens of dead bees were everywhere and many hadbeen stepped on, their gold pollen loads smashed. There weren't as many as initially thought; no doubt hungry birds ate some of them, and others had been swept up.

Mussen, who retired last June after 38 years of service, picked up some of the dead bees and noticed that nearly half had small-to-large pollen loads on their legs. Their wings were not tattered. He quickly deduced that the bees had not worn themselves out foraging.

"However, this early in the season, many of the foraging bees are bees that survived since last fall," Mussen said. "Depending upon their overall health, they were working toward the ends of their lives."

Mondavi house manager Kerrilee Knights showed him dead bees on an upper outdoor patio. So the bees were not only dying at ground level but upper levels, Mussen realized.

He noticed some bees flying up over the roof and some live bees "resting" on various parts of the building.

"There's a colony up there somewhere," Mussen said, pointing toward the roof.

Mussen cupped some of the sluggish bees in his hands, and once warmed, off they flew. The other survivors? They were too cold to fly and they would die overnight as the temperature dropped.

Mystery solved. "Elementary, my dear Watson?" No, not really. It's a scene that non-beekeepers rarely see.

"This is normal and no reason for alarm," Mussen said, "except that people usually are not that close to bee colonies to notice the normal demise of substantial numbers of overwintering bees."

So, it wasn't pesticides, pests, diseases, malnutrition or stress.

Old bees and a cold spell... This dead honey bee with a load of pollen was among dozens found outside the Robert and Margrit Mondavi Center for the Performing Arts on the UC Davis campus. (Photo by Kathy Keatley Garvey)
Tags: bees (1), cold (1), dead bugs (1), freeze (1), Neonicotinoid (2), pesticides (2), pollinators (1)
Comments: 0
Benefits of Pesticide Use: In Relationship to the Emerald Ash Borer
Published on: January 21, 2015

I often teach that there is a place for pesticides, especially when there are no effective alternatives. For instance, if you leave the aphids alone on your rose plants, they will eventually disappear due to the abundance of all the associated natural enemies like ladybird beetles. Some damage will occur, but the end result will be enjoyable roses in the landscape or in a vase. However, if you are going to show the rose - that first early season rose is the most brilliant - and not protect it, it will not be showable. Similarly, it is a shame if you own a 100-year old beautiful shade tree in your yard and you let a pest destroy it when you could have prevented it.

There is a concern by many that the systemic neonicotinoid insecticides are harming wildlife and the environment, and many folks are not willing to use them or purchase plants that have been treated with them. That is amazingly unfortunate because of all the benefits of this insecticide class, and much of the expressed concerns are scientifically unfounded. The best example I can give of a fit or a need for insecticide use is presented in the case of the Emerald Ash Borer (EAB). EAB is a beetle as an adult, but the immature form, called a grub, is responsible for girdling ash trees and killing them within three years depending on the size of the tree and the extent of the infestation. EAB has been blamed for killing tens of millions of trees in about 22 states, and it is said, that the destruction of the ash in our forests and urban landscapes could rival the loss of elms due to the Dutch elm disease. That's significant. The benefits of ash trees in the landscape is clear, so the loss of all or nearly all of the landscape ash would be devastating, in my opinion.

There are those, however, that would not protect the trees with neonicotinoid insecticides at any cost. Unfortunately, there are grand examples of communities that refuse to protect their trees with systemic neonicotinoid insecticides, and I recommend that you take a look at the before and after pictures attached and check out the links to more information below. You will see that there is a place for insecticide use in this instance. Some may say that we can replace the landscape trees with alternatives that won't be affected. That's true, but it won't save our forests, and it will leave infected trees in our urban landscapes that will act as a reservoir for the beetle. 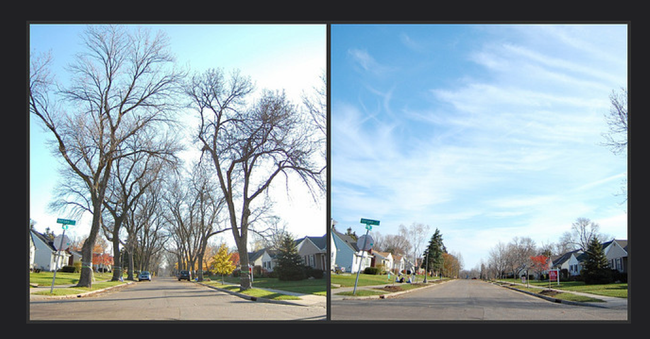 Insecticide resistance monitoring of fungus gnats in poinsettia production
As frustrating as pests can be, there's nothing worse than finding a solution to that pest problem and rejoicing in your short term success, only to find that your "solution" is no longer doing the trick. In the pest control industry, this is called pesticide resistance.

This new online course was created primarily for pest control advisors and other licensed pesticide applicators and highlights how pesticide resistance develops among pests. It also describes the mechanisms of resistance in pathogens, insects, and weeds and ways to manage resistance within the different diciplines. It is divided into three narrated presentation followed by a final test for each section. This course has been approved for 2 continuing education units in the "other" category from the Department of Pesticide Regulation.

This course is based on a series of workshops held in Davis, Fresno and at the Kearney Agricultural Research and Extension Center during the spring of 2014 presented by Dr. Doug Gubler (Dept. of Plant Pathology, UC Davis), Dr. Larry Godfrey (Dept. of Entomology and Nematology, UC Davis), Dr. Beth Grafton-Cardwell (Lindcove Research and Extension Center and UC Riverside), and Dr. Kassim Al-Khatibi (UC Statewide IPM Program).

Insecticides play an important role in pest management efforts in California, but it's very important to keep sprays on-target. Improper targeting or poorly maintained equipment can cause spray drift, which can result in unnecessary exposure to people, wildlife and the environment. With that in mind, your application technique and equipment maintenance are keys to reducing the movement of insecticides.

Spray drift occurs when spray droplets are carried from the application site and deposited on non-target sites. Spray drift can also occur from vapor drift (evaporation of insecticide from a plant surface) and particle drift (spray carrier droplets evaporate, leaving concentrated insecticide droplets). Spray drift is influenced mainly by droplet size; the larger the droplet, the less likely it will be carried off-site. Since small droplets are lighter and remain airborne longer than larger ones, they travel greater distances from the treatment site. A high spray height or wide nozzle tip angle will also increase drift distance. Several environmental and spray conditions affecting spray drift potential are shown below:

To increase pest control success and reduce the likelihood of spray drift, consider the following application factors before Fungus gnats are small flies that infest soil, potting mix, or plants grown in pots or containers (Figure 1). Your customers may complain about fungus gnats resting on or swarming around plants or soil or flying around windows in their houses.
Adult fungus gnats don't harm plants or people, but they can be annoying. On the other hand, fungus gnat larvae (Figure 2), which live in soil and feed on roots, can be damaging when their numbers are very high, sometimes causing plants to wilt. Their feeding may cause seedling plants to die or injure roots, allowing entry of plant pathogens. Larvae are whitish to clear with black heads and, with a length of less than ¼ inch, very difficult to see. When abundant, they may leave shiny trails on the soil surface. Figure 2. Fungus gnat larvae.
Cultural practices and trapping. For many customers, changing watering practices may solve fungus gnat problems. For instance, allowing soil surfaces to dry between watering or using pasteurized potting mix and keeping infested plants away from clean ones. In some cases it may be possible to manage the situation by placing small pieces of yellow sticky traps in pots to control adults.
Biological controls. Where cultural practices haven't effectively controlled the problem, customers may ask about treatment options. Although insecticides such as pyrethrins are available for this use, the safest and often most effective products for home use are the commercially available biological insecticide Bacillus thuringiensis subspecies israelensis (Bti) and the insect-attacking Steinernema nematodes.
Bacillus thuringiensis ssp. israelensis is the most common of these products on store shelves. Mosquito Bits and Gnatrol are common trade names. Bti is a bacterial by-product that kills flies and is related to B. thuringiensis ssp. kurstaki products available for caterpillar control, but Bti is toxic only to fly larvae such as mosquitoes, crane flies and fungus gnats. Repeat applications are often needed for long-term control. Figure 3. Shiny trails left by fungus gnat larvae on the soil surface of a plant pot.
Nematode products must be refrigerated and have a short shelf life so many stores don't carry them, but some stores provide customers with a mail-order voucher to obtain fresh product. There are several species of insect attacking nematodes and it is important to use the correct species. Steinernema feltia is the most effective commercially available species for managing fungus gnats. Nematodes are mixed with water and applied as a soil drench. Nematodes reproduce and search for hosts so may provide longer-term control after several applications when soil is moist and temperatures are warm.
For more information on fungus gnats and their management see Pest Notes: Fungus Gnats.
Tags: biological control (1), floriculture (2), flowers (2), fungus gnats (1), nursery (2), ornamental plant production (1), pest control (4), pest diseases (1), pest identification (1)
Comments: 0
Last story >>
Viewing 1-5 of 5
Recent Posts
'Super Sleuth' Solves the Mystery of the Dead Bees
January 22, 2015
Benefits of Pesticide Use: In Relationship to the Emerald Ash Borer
January 21, 2015
New Pesticide Resistance Online Course with Continuing Education Units
January 8, 2015
Recent Comments
James A. Bethke: I hope we do not wait until our...
Robin Y Rivet: I am a devoted urban tree...
Top Tags
• pest control • floriculture • flowers • insecticides • Insects • IPM • Neonicotinoid • nursery • Pesticides • bees • Beetle • biological control • cold • continuing education • dead bugs
/ RSS