The class learned about the direct link between urban consumers and local food producers, providing a powerful conduit for educating the public about the importance of local food production and rangeland management. Sonoma and Marin Counties are perfect models for demonstrating how

Ranching PRNS, albeit smaller scale, remains a local industry, which provides job creation, training and business succession, and market expansion for many other ranchers and farmers.

Through the 1980s and 1990s and into the early 2000s, efforts to conserve threatened and endangered (special status) species on western rangelands often meant removing livestock ranching.  Research findings, demonstration results, and failed conservation efforts in recent years involving endangered species has supported the continuation of livestock ranching and the reintroduction of grazing to some rangelands that were “protected” through grazing removal. At the landscape level,

research has demonstrated that livestock ranching
maintains extensive, open spaces by
reducing land use conversion, fragmentation of habitat,
and vegetation type conversion from invasion of brush.

Threats to native biodiversity, including special-status species, are likely to increase with removal or decrease of grazing. Research and experience have shown that grazing is strongly linked to maintaining habitat for some special-status species on PRNS lands, while they have been inconclusive for others. Sonoma alopecurus (Alopecurus aequalis var. sonomensis) is found in eight naturally occurring populations in Sonoma and Marin Counties; the four sites in Marin County all occur at PRNS and are all grazed by cattle; Sonoma spineflower found solely in a grazed pasture at PRNS.  Tiburon paintbrush and Marin dwarf flax occur on serpentine grasslands, with six occurrences of Marin dwarf flax on Golden Gate National Recreation Area (GGNRA) grazing lands.  PRNS staff concluded, “Marin dwarf flax may benefit from a moderate level of cattle grazing through the reduction of taller competing vegetation as the flax is subject to shading by competing grasses or may be suppressed by build-up of thatch from previous year's herbage if left ungrazed.” (USNPS 2001).

Documented research, along with good stewardship provided by generational ranchers, has demonstrated the benefits provided to the ecosystems at Point Reyes National Seashore. 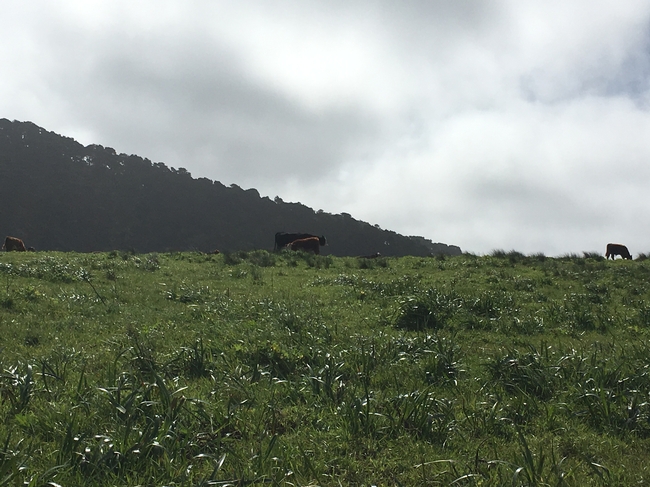 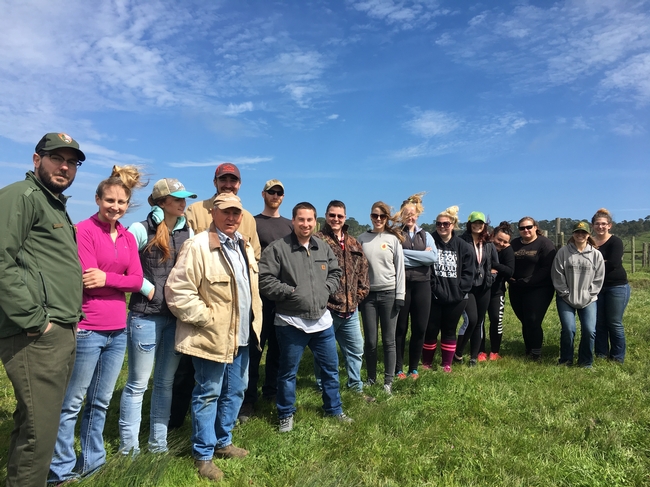 The annual rainfall averages 34 inches and almost entirely comes between October and May. The preserve is primarily an upland habitat with perennial springs, but no perennial streams. The students learned about grazing history, as California grasslands evolved in the presence of grazing mammals and have adapted to grazing disturbance. The grasslands of Pepperwood have a history of grazing by domestic animals, which was first documented by a survey crew in 1858. Sheep herding gave way to cattle grazing during the Bechtel family's tenure from the 1940's through the 1970's. Since becoming a nature preserve in 1979, until 2012, the preserve utilized seasonal (winter and spring), open range grazing, moving herds of between 80 and 300 stockers between 3 pastures of about 300 acres each.

In 2013, Pepperwood initiated a Conservation Grazing Program using electric fencing to control herd density, manage seasonal timing and increase rest periods between animal impact events. Rangeland research and practical experience has demonstrated that animal disturbance can have a positive impact on grasslands and some native fauna if properly managed for conservation goals.

The use of domestic grazing animals to achieve conservation goals is not new and is sometimes referred to as targeted or prescribed grazing or holistic grazing. Pepperwood prefers the term “conservation grazing” because it speaks directly to the goals of their grazing program.

Cattle managers use electric fencing and portable water systems to maximize the ability to control animal density and duration on varying grassland types and environmental conditions. The Conservation Grazing Program at Pepperwood intends to demonstrate that by using variable density, short duration grazing and adequate periods of recovery, rangeland managers can make progress towards conservation goals. 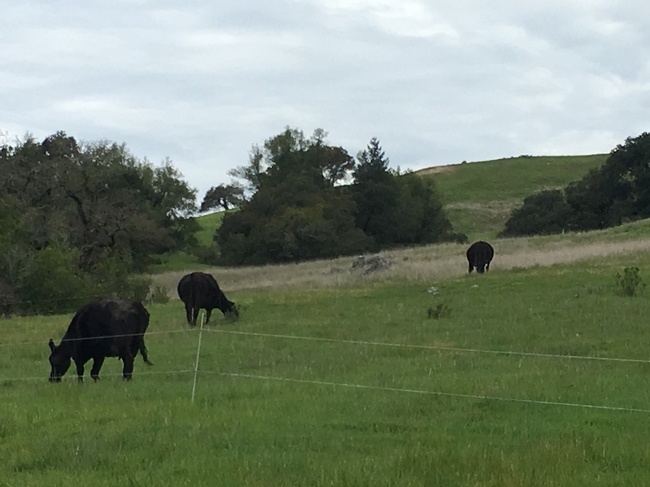 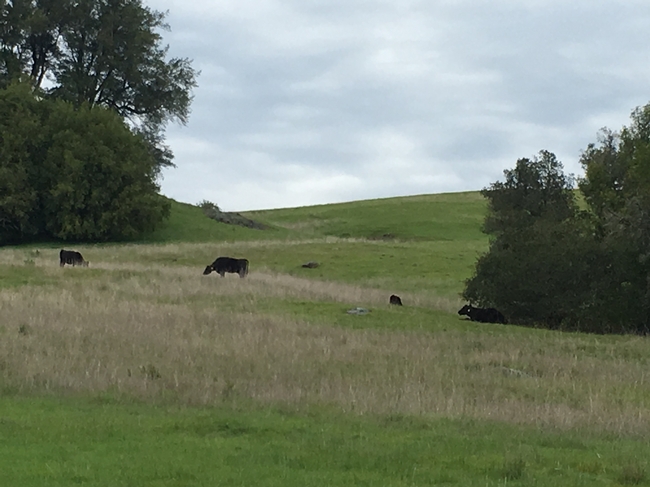 The University of California Cooperative Extension recognized rangelands and their importance in Sonoma County, creating the “Ecosystem Services Interpretative Signage” to increase awareness and knowledge of park visitors, mangers and decisions makers of working rangelands and the ecosystem services. Rangelands are also referred to as working landscapes, are locally managed and provide essential biological, scenic, economic, and recreational values locally and throughout the world. Working landscapes are threatened in many areas by development, conversion to other intensive land uses, and alteration of management regimes. UCCE Sonoma Advisor, Dr. Stephanie Larson, with Regional Park staff to develop the interpretive language for the signage now posted at Regional Parks that are grazed. These signs park visitor's information about why beef cattle are grazing our local parks.

Beyond the obvious benefits of beef cattle grazing such as food production, grazing can benefit individual plant and animal species, can help manage fire hazards, and, in the absence of natural disturbance regimes, help maintain Sonoma County's landscape structure. Beef cattle not only provide beef as food, they are also used as grazing tools, keeping weed or shrub invasion at bay, enhancing wildflower displays, or maintaining a low grassland canopy height to allow visibility, foraging, and movement of small mammals such as voles and ground squirrels. Rangelands not grazed or otherwise managed, especially where they abut or intergrade with shrublands, will become shrub invaded, which converts grasslands to coastal scrub. As well as increasing fire hazards, this conversion results in loss of coastal grasslands and; thus, loss of the species that occupy them. Fire and livestock grazing are the two main tools we can use to maintain grassland ecosystems.  In Sonoma County, fire has become more difficult to use, livestock grazing is the most common and practical option. Maintaining rangelands has several benefits associated with water, including increasing water infiltration and increasing vernal pool inundation period for fairy shrimp and the California tiger salamander. In addition to ecosystems services associated with water, livestock grazing can also improve habitat for native annual forbs & grassland birds, control invasive weeds, reduce fire hazard, etc. Rangelands provide a direct link between urban consumers and local food producers, which is a powerful conduit for educating the public about the importance of local food production and security.  Sonoma County is a perfect model for demonstrating how preserving family farms contribute to social, economic and ecological sustainability at local, regional and even national levels.  Ranching has positive health impacts including increased food access and food security, food to local business and schools, improved health literacy and general well-being.  Ranching in Sonoma County, albeit smaller scale, remains a local industry which provides job creation, training and business succession, and market expansion for many other aspiring ranchers.
Tags: cattle (2), Grazing (12), Rangelands (4)
Comments: 0
Point Reyes - Grazing, Elks and Cattle
Published on: May 4, 2015 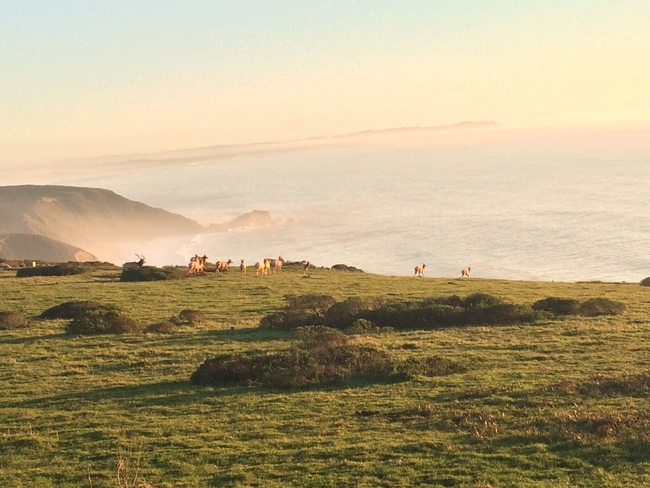 The Water Boards have formed a work team to develop this project (titled Statewide Grazing Regulatory Action Project or GRAP).

The overall goals of the GRAP work team are to develop an approach that efficiently addresses water quality impairments associated with grazing operations – an approach that will help to streamline the process of addressing impairments, conserve valuable resources, and give implementing parties the clarity and consistency they deserve. The GRAP team is working to identify how to balance statewide consistency with regional autonomy, and will take into account regional differences in hydrology, grazing practices and other distinguishing factors as it develops recommendations.