Looking for information in the wake of the Woolsey and Hill fires? For information about county resources for debris removal, erosion management, and how to access support for housing, financial support, and support for agricultural resource recovery, you can visit http://venturacountyrecovers.org/. To find diaster assistance centers in Los Angeles County, visit https://www.lacounty.gov/woolseyfire-disaster-assistance-centers/. For specific questions related to applying for aid, policy, and legal issues, you can also visit Pepperdine Law's Disaster Relief Clinic at https://law.pepperdine.edu/experiential-learning/clinical-education/clinics/disaster-relief-clinic/ . They are not there to represent plantiffs in legal action, but can provide guidance on how to seek representation.

You can find a great deal of technical information in the Ventura County Fires Info Facebook Group, and learn about and share resources at the Woolsey and Hill Fire Info Facebook Group. University of California is providing these links as a (hopefully) helpful service, but does not vet or stand behind any particular information users share there.

Want to learn more about how to protect your slopes and property, and what to plant now to be prepared for the next fire? Ventura Public Works will be holding a free workshop on these topics featuring Rich Casale from the Natural Resources Conservation Service, and Sabrina Drill from UCCE Ventura County Wednesday, February 7th, at Ventura College's Wright Event Center - see you there!' 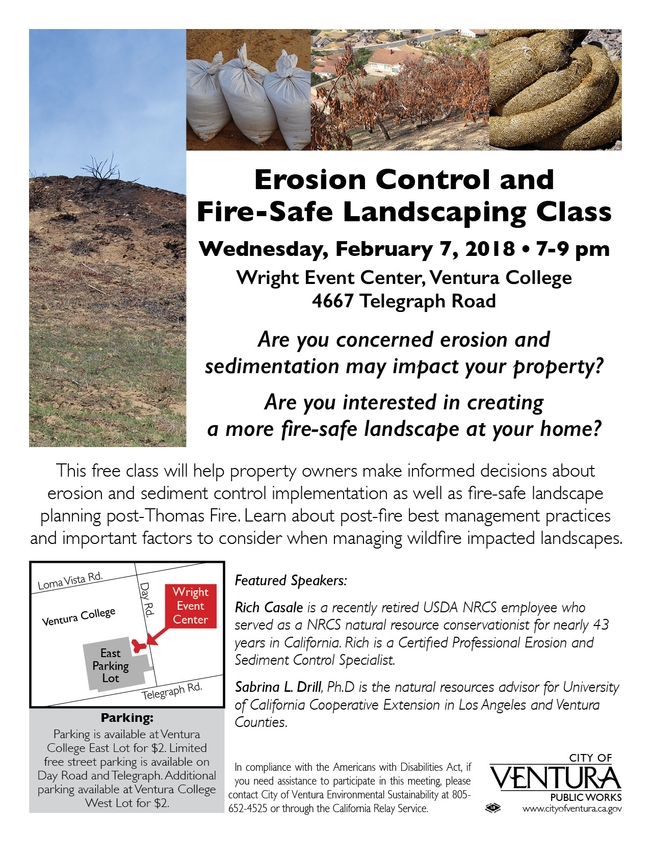 The agriculture community will be interested in a UCCE hosted workshop on fire and frost damage and preparation January 10th at the Agriculture Museum in Santa Paula - http://ucanr.edu/sites/SAFELandscapes/?calitem=396547&g=29423

If you are looking for information about or volunteer opportunities to help with the recovery of natural areas, however, there are a few events coming up:

Ventura Land Trust will be hosting a volunteer opportunity for Martin Luther King Jr. Day January 15th at their Big Rock Preserve, http://www.venturalandtrust.org/mlk_20180115, and will also be hosting a lecture by my colleague Dr. Sean Anderson from CSU Channel Islands January 17th at 7:00 PM at Poinsettia Pavilion - http://www.venturalandtrust.org/lecture_thomas_fire.

February 17th the Ojai Valley Land Conservancy's Plant Walk will include a talk by folks from the California Chaparral Institute - https://www.facebook.com/events/142471386462631/

The Natural Resources Conservation Service has a series of helpful fact sheets about post-fire erosion control methods. To choose the right methods, you'll need to examine your unique situation and goals. These include whether your concerns are more immediate or if you have the opportunity to consider medium to long-range vegetation recovery, the degree of your slopes, how intense the burn was near you (is there still standing charred vegetation that might re-sprout?) and what the underlying geology and soil types are. You may need a site visit from an erosion control specialist, but these fact sheets can help you weigh your options NRCS Post-fire resources California is experiencing an unprecedented wildfire season. The season is extraordinary not only due to the number of acres burned, but aslo due to the length, with large fires and red flag warnings expected through the end of the year. In October of 2017, fast-moving wind-driven wildfires burned through more than 200,000 acres in seven California counties. More than 8,000 homes were destroyed and 42 people lost their lives as they tried to escape. In December, new incidents began in Southern California, with the largest fire, the Thomas fire in Ventura and Santa Barbara counties estimated at almost 272,000 acres (~435 mi2) as of 12/19/17.  Smaller fires such as the Rye, Creek, and Skirball fires in December and the La Tuna fire in September occurred in Los Angeles county and burned just under 30,000 acres.  Losses in Southern California were extensive in Ventura and Southern Santa Barbara counties (over 1250 structures destroyed or damaged).

The Thomas fire is one of the largest fires ever recorded in California history – but perhaps more important than acreage is the location of this, and the recent wine country fires burning significant areas of urban and suburban development.  The land uses affected by these fires are complex as well, including residential and commercial areas as well as areas of row and tree crops, active rangeland, and wild habitat along with its significant watershed protection and recreational values.

In addition to the local resources to be found at http://ucanr.edu/sites/SAFELandscapes/, statewide information and resources can be found here.

Thomas Fire image captured on 17 December 2017, by the MODIS instrument, on board the Terra satellite. from https://earthdata.nasa.gov/thomas-fire-california