Comments: 0
Weed control in vineyards to slow the spread of Impatiens Necrotic Spot Virus (INSV) in lettuce
Published on: November 3, 2021

Impatiens necrotic spot virus (INSV) is a serious disease of lettuce in Monterey County. It is a tospovirus that is spread by an insect vector, the western flower thrips (Frankliniella occidentalis). INSV also infects a wide range of other host plants and is spread when thrips acquire the virus from infected host plants and migrate into uninfected lettuce fields. Lettuce is a key host for INSV during the lettuce production season, but during the winter when there are no lettuce fields, the virus survives in weedy host plants in a variety of habitats: roadsides, ditches, waste areas around equipment yards,  and natural areas. Vineyards can also be habitat for INSV due to the presence of infected weed hosts. This article will discuss the specific role of vineyards in providing habitat for INSV host plants.

Grass cover crops or resident grass weeds are not a concern for INSV because grasses are not  hosts. However, broadleaf weeds in row middles that are INSV hosts can serve as a source of INSV. Key weeds in Monterey County vineyards that are of concern include:

Of the weeds listed above, little mallow, annual sow thistle, and nettleleaf goosefoot have the combination of being common in vineyards, having relatively high levels of infection, and being good hosts for thrips, particularly when flowering.

The  row middles can have substantial populations of broadleaf host weeds if the grasses do not dominate. Increasing the density of grasses in the row middles can be accomplished by supplemental seeding of grass cover crops (various cereals) or resident grasses (e.g. Blando brome). The herbicide Shark (carfentrazone) can be sprayed on the row middles when broadleaf weeds are small to selectively remove them and allow grasses to grow. 2,4-D is registered for use on grapes during the dormant winter period and will also remove broadleaf weeds, but extreme care would need to be taken to safeguard the grapes as well as surrounding crops to consider use of this option.

The most common weed option used in vineyards to control weeds in the row middles is mowing. In 2021 we observed a vineyard where the row middles were not mowed and which was infested with nettleleaf goosefoot, sow thistle, little mallow, and shortpod mustard. The nettleleaf goosefoot, little mallow, and sow thistle all had levels of infection >35% and the adjacent lettuce crops were highly infected with INSV, particularly on the edges adjacent to the vineyard. The shortpod mustard had a much lower level of infection with INSV, but it was flowering, supporting thrips populations. In this situation, it is not clear if mowing  would have reduced levels of infection in the adjacent lettuce, but mowing would have managed the weeds by weakening them and thinning out their population.

Weed control is particularly important in the spring when thrips populations begin to increase. It is unclear how far thrips can move, but they rely heavily on the Salinas Valley winds for long distance dispersal.  Monitoring efforts showed that thrips are equally distributed in the wind column up to 10 feet high and have even been detected in moderate numbers at heights above 20 feet.

Losses from INSV in 2020 exceeded $50 million. The INSV Task Force, composed of growers, PCA's, the Grower-Shipper Association, the County Agricultural Commissioner and researchers, meets weekly to discuss ways of reducing the  spread of INSV. The Agricultural Commissioner in 2021 included a notification with each pesticide permit discussing the need for growers to control weeds on their properties and outlined their authority to address nuisance weed issues.

In 2021 growers undertook a coordinated efforts to aggressively control winter weeds to reduce the level of infected host plants  in the county. These efforts included outreach to all vegetable growers in the valley, Cal Trans (along the 101 corridor), railroad, and the city of Salinas (municipal roadways).  While it is hard to say for sure, these efforts appear to have reduced the levels of INSV infected fields in some areas.

In 2022 we hope to increase efforts to reduce over-wintering habitat for INSV host plants by continuing outreach and promoting best management efforts to all for the benefit of lettuce growers in the Salinas Valley.  For more information: Contact Richard Smith, 831-759-7357 or Larry Bettiga, 831-759-7361.

8:30         Update on the use of steam and automated weeders for control of weeds and soilborne diseases in lettuce

9:00         Epidemiology and management of Fusarium wilt of lettuce

9:30         Epidemiology and management  of Pythium diseases on spinach

Jim Correll, Professor of Plant Pathology, U of Arkansas

John Palumbo, Professor and Extension Specialist, U of Arizona

4.0 DPR continuing education credits have been approved (other category)

The University of California prohibits discrimination or harassment of any person in any of its programs or activities. (Complete nondiscrimination policy statement can be found at http://ucanr.org/sites/anrstaff/files/107734.doc). Inquiries regarding the University's equal employment opportunity policies may be directed to Affirmative Action Contact and Title IX Officer, University of California, Agriculture and Natural Resources, 2801 2nd Street, Davis, CA 956:18, (530) 750-1397; titleixdiscrimination@ucanr.edu.

A brand-new online course on Diagnosing Herbicide Injury focusing on how an herbicide injury situation can arise, what information can help diagnose symptoms during field investigations, and what tools are available to you, is now available from the UC Statewide Integrated Pest Management program (UC IPM).

When unexplained damage is noticed on a crop or other non-weed plant, herbicides are often a primary suspect. That is no surprise because herbicides are very powerful and effective tools used to control weedy plants in a wide variety of locations. However, symptoms of many other plant stresses, such as diseases and nutrient deficiencies or toxicities, can closely resemble the injury symptoms caused by herbicides. Economic implications of herbicide damage can vary–in some cases visible injury may have very little direct economic effect while in others, even slight herbicide symptoms can affect the marketability of affected plants. In addition, the presence of an unregistered herbicide on non-target crops can result in illegal residues which could have both safety and legal consequences.

The new online course was developed by Dr. Brad Hanson and Dr. Kassim Al-Khatib from the Department of Plant Sciences at UC Davis, and UC IPM instructional designers. If you are a grower, pest control adviser, or pesticide applicator, then this course is a great opportunity to learn about how to approach crop injury investigation when herbicide is suspected cause. You will learn how herbicides injure plants, how long herbicide symptoms may last and factors that may influence the time that herbicide injury symptoms are visible, possible scenarios of herbicide exposure based on uniform and variable injury patterns observed in the field, how to prepare samples for the laboratory analysis and more.

The course content is free to anyone who wishes to view it. For those requiring a certificate of completion and continuing education units (CEUs), the regular cost is $30, but we are offering a reduced price of $15 through October 31, 2021. Diagnosing Herbicide Injury course has been approved by the California Department of Pesticide Regulation (DPR) for 1.5 continuing education units (CEU) of Other, Certified Crop Advisor (CCA) for 1.5 units (IPM), and the Arizona Department of Agriculture for 1.0 Credit.

If you are a DPR license or certificate holder with a last name beginning with letters M through Z, then this will be your year to renew. Now is a good time to check out the other UC IPM online training courses offered. All are 50% off the regular price through October 31st. DPR strongly suggests returning renewal packets back to them by October so that your license or certificate can be renewed before it expires. Many of our courses are accredited by DPR for continuing education hours and also by the California Structural Pest Control Board (SPCB), Certified Crop Advisor (CCA), the Western Chapter of the International Society of Arboriculture (WCISA), and the Arizona Department of Agriculture. 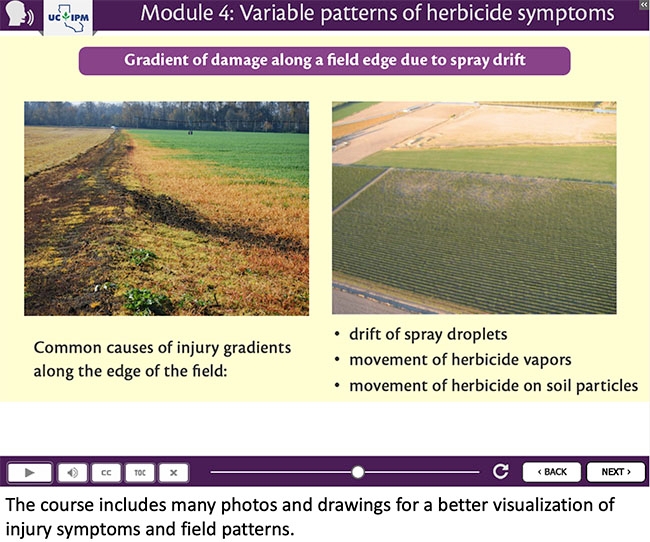 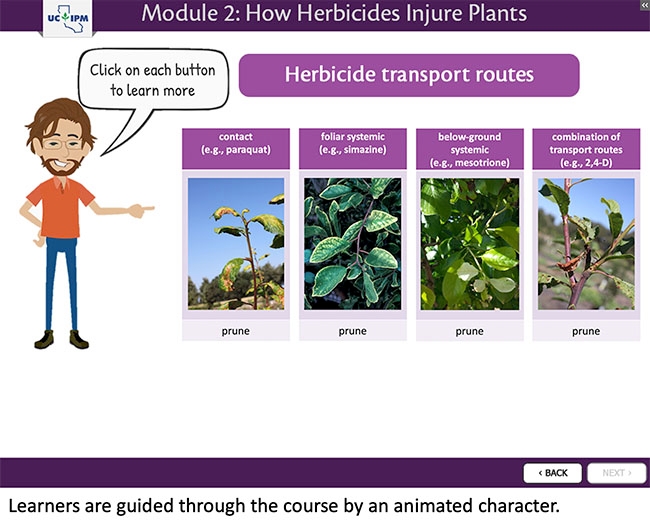 Oakleaf goosefoot a new weed concern in the Salinas Valley

Oakleaf goosefoot (Chenopodium glaucum) is a new weed to the Salinas Valley that has become more prevalent. Its population has been on the rise for several years and it has become a significant weed in some parts of the valley. It ranges in vegetable production fields from Castroville to King City. High populations are still spotty in the valley, but in some fields it is one of the principal weeds.

Oakleaf goosefoot can be distinguished from the other Chenopodium species by the shape and texture of the leaves. The undersides of the  leaves are white-mealy (Photo 1), while the rest of the plant is glabrous or nearly so (Photo 2). The leaves tend to be thickened and the margins of the leaves can be coarsely serrated. The plant is more prostrate than lambsquarters or nettleleaf goosefoot and that is a good way to distinguish it in the field (Photos 3-5). The stems of oakleaf goosefoot tend to be reddish. Photo 4. Oakleaf goosefoot in comparison with lambsquarter seedling (on right). Photo 7. Flush of oakleaf goosefoot growing along the edge of a ditch