The Australian finger lime, a citrus relative, could be a new specialty crop for Florida citrus growers.

Traditionally, finger limes have remained rare in the United States, grown few and far between. However, the fruit's unique tolerance to HLB is becoming increasingly attractive to Florida growers. Manjul Dutt, research assistant scientist at the  University of Florida Institute of Food and Agricultural Sciences (UF/IFAS) believes finger limes could secure Florida's position in the global citrus market.

In the field, finger limes have a low HLB infection rate. Early on, researchers noticed these trees were much more tolerant to HLB than any of the traditional citrus varieties being grown in the state.

Additionally, the phloem of the finger lime contains high levels of aldehyde compounds. According to Dutt, citronellol, a compound of growing interest and present in the phloem, has shown to have anti-bacterial activity, which could also be preventing the replication of CLas.

One of the pressing issues limiting commercial production of finger limes in Florida is the lack of knowledge about the crop. Dutt and his team of researchers are currently evaluating different rootstocks in hopes of finding varieties suitable for Florida's growing conditions.

Furthermore, they are developing new cultivars that are crosses between conventional citrus and finger limes to incorporate HLB tolerance into traditional citrus varieties. Dutt says thousands of trees are currently being evaluated and quite a few appear promising

Tapping into their genetics
While finger limes aren't exactly set out to be the new crop replacing Florida's longstanding orange and grapefruit industry, Dutt believes finger lime trees can provide a strong assist. “Hybrids between finger limes and sweet orange down the road may have sweet orange-like traits that can be acceptable to the grower and consumer. It would create a sweet orange-like fruit with finger lime genetics that allow it to be tolerant to HLB,” he says. “Many people in the industry realize it's a long-term process. Some are skeptical but overall, people are hopeful that the finger-lime genetics play an important role in providing HLB-tolerant trees in the future.”

To date, finger limes are more of a niche crop in North America with only a few growers in California, Hawaii and Florida.

In the meantime, Dutt has produced a finger lime hybrid that looks like a larger finger lime. “We'll be releasing it this summer—it's similar to the finger lime but it has more pulp and the same “pearls” that finger limes do,” he says. He adds that it's a commercial release as a niche crop and hopes the limes will be available in stores in the next three to four years 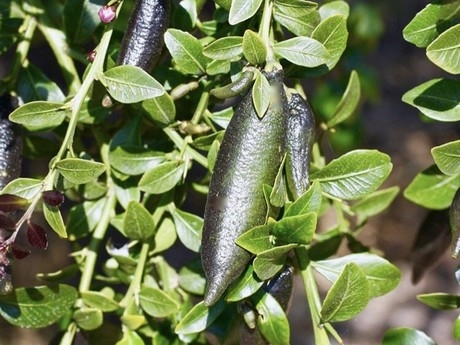