Why is my Apple, Walnut, Blueberry, Peach, etc. Not Flowering and Looking Terrible?
Published on: June 22, 2015 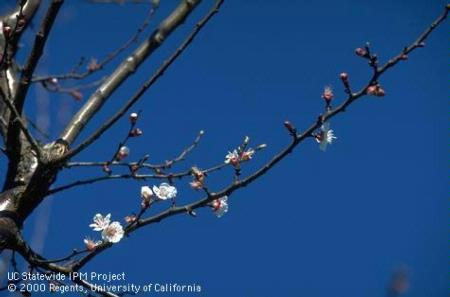 A local Santa Barbara backyard grower has been experimenting with many different apple varieties and has found some unusual success at growing a wide variety of them that according to their published chilling hours requirements should not do well in Southern California.

Apple varieties grown in Santa Barbara by Dave Beamer as of Nov. 2014

I assume that three or more years of good fruit means a variety is reliable in coastal Santa Barbara County.

I have tasted locally grown Standard Delicious apples (the original “Delicious” variety, also called Old-Fashioned Delicious or Hawkeye). These apples are green with red stripes and are larger, juicier and have better flavor and texture than today's Red Delicious. Their flavor is sub-acid (very mildly tart).

I have been told that in this area Golden Delicious goes from unripe and sour to mushy – without ever passing through ripe. I have not tried growing it.

Varieties that grew bad fruit in my yard (I have removed these):

Cox's Orange Pippin (3 crops)       tart, some were good for two small crops; in 3rd crop all apples split and rotted

Bevan's Favorite (one apple)         aromatic, not much flavor, poor texture in early July; I will try it again

Very young varieties that have not yet fruited:

Contact me if you want free summer or winter scion wood from my trees. (Please note: some of my trees are still too small to donate wood.)

Sources of my trees and apple information:

For an especially useful website go to www.kuffelcreek.com and click on “Apples”. Kevin Hauser tries to keep 100 apple varieties growing in his yard in very hot Riverside, California. He removes trees that grow bad fruit and replaces them with other varieties that are new to him. He has also experimented with different rootstocks. His website has a link to his blog, where he posts information on growing apples in the tropics as well as in Riverside.

The weakness in his information is his optimism. He may declare that a variety is good in Southern California if only the last apples of a variety to ripen are good and all the earlier apples were bad. Next year you may read that every apple ripened too early and he's getting rid of that tree. That's why I bought Ribston Pippin and Zabergau Reinette from him, one year before he declared both of them bad for Southern California (they were bad here also). But he has done a huge amount of pioneering work for warm-winter areas and the tropics.

The website for Trees of Antiquity (www.treesofantiquity.com) has good information about planting fruit trees and summer pruning for size control.

Dave Wilson Nursery (www.davewilson.com) has a lot of information for home fruit growers on its website, although they only sell wholesale. Bay Laurel Nursery retails some of their apple trees but only on M7 rootstock, which grows lots of suckers.

Apple information—flavor, ripening time and quality of fruit—usually comes from other parts of the world and may not apply here. Be a pioneer: grow a variety that's new in Southern California and share what you learn.

Feel free to share this information with others. (Spread the wealth!)