Census of Agriculture response deadline one week away

WASHINGTON, Jan. 29, 2018 –The U.S. Department of Agriculture's (USDA) National Agricultural Statistics Service (NASS) reminds our nation's farmers and ranchers that the deadline for the 2017 Census of Agriculture is one week away. Producers should respond online at www.agcounts.usda.gov or by mail by February 5. The online questionnaire offers new timesaving features.

The Census of Agriculture is the only NASS questionnaire mailed to every producer across the country and is conducted just once every five years. The Census provides a complete account of the industry, its changes, and emerging trends. Census data are widely used, often relied on when developing the Farm Bill and other farm policy, and when making decisions about disaster relief, community planning, technology development, and more.

“We are asking producers to help show our nation the value and importance of American agriculture,” said U.S. Secretary of Agriculture Sonny Perdue. “We need to hear from all of our farmers and ranchers, no matter how big or how small their part of agriculture. The Census is their voice, their future, their opportunity. Please respond now.”

Everyone who received the 2017 Census of Agriculture questionnaire is to return it, even if they are not currently farming. The first few qualifying questions on the form will determine whether completing the entire questionnaire is necessary. After the February 5 deadline, NASS will begin following-up with additional mailings, e-mails, phone calls, and personal appointments. To avoid these additional contacts, farmers and ranchers are asked to complete their Census as soon as possible.

“It is important that every producer respond to the Census of Agriculture so that they are represented and reflected in the data,” said NASS Administrator Hubert Hamer. “These statistics can directly impact producers for years. Without their input, our hardworking farmers and ranchers risk being underserved.”

The Census is the only source of uniform, comprehensive, and impartial agriculture data for every state and county in the nation. Producers are required by law to respond; NASS is required by the same federal law to keep all information confidential, use the data only for statistical purposes, and only publish in aggregate form to prevent disclosing the identity of any individual producer or farm operation. 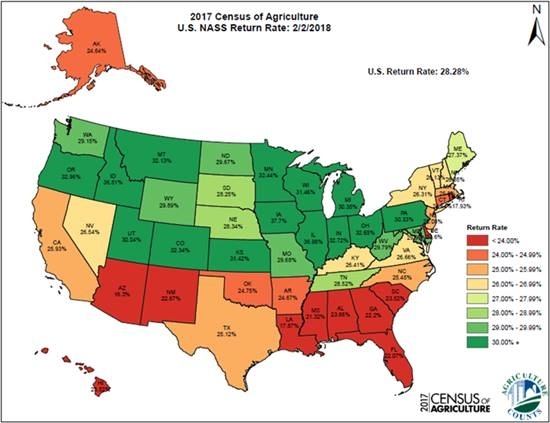