Rats in Your Orchard
Published on: December 2, 2015

The roof rat (Rattus rattus), sometimes called the black rat, is a common vertebrate pest in citrus, avocado and other yummy tree orchards. It builds leaf and twig nests in fruit trees or nearby trees, or it can nest in debris piles or thick mulch on the ground. This agile, sleek rat has a pointed muzzle, and a tail that is longer than the body and head combined.

Be sure to identify the species of rat present to avoid killing nontarget or protected species. Be aware that endangered native kangaroo rats (Dipodomys spp.) and the riparian woodrat (Neotoma fuscipes riparia) resemble pest rats, but are protected by law. Unlike the hairless, scale-covered tail of roof rats, the tails of kangaroo rats and the riparian woodrat are covered with fur. The riparian woodrat is active mostly during the day, and its tail is somewhat shorter than the combined length of its body and head. A kangaroo rat's tail is noticeably longer than its body and head combined. Kangaroo rats are nocturnal, but unlike Norway rats and roof rats, which move on all four legs, kangaroo rats hold their front legs off the ground and travel by hopping on their hind legs.

Rats gnaw on electrical wires, wooden structures, and fruit on trees. After harvest, they damage fruit in bins, chewing on the bins and leaving excrement. Rats are active throughout the year, and mostly at night.

To help manage rats, reduce shelter and nesting sites of rats. Eliminate debris and wood piles. Store materials neatly and off the ground. Thin and separate non-crop vegetation around orchards where feasible. Exclude rats from nearby structures by properly sealing entry ways.

Baits and rat-sized snap traps placed in trees are the most effective control measures. Rats are wary, tending to avoid baits and traps for at least a few days after their initial placement. Fasten traps to limbs and bait them with sweet fruit or nut meats, but do not set the traps until after bait is readily eaten. Secure anticoagulant wax blocks in a bait station before placing in trees on limbs 6 feet or more above the ground. Placing the wax blocks in a bait station will prevent chunks of the anticoagulant wax from dropping to the ground and creating a hazard.

Be aware that certain types of single-dose rat baits for use inside buildings are not labeled for use outdoors in orchards; these are hazardous to wildlife and should not be used.

For more on the subject see: 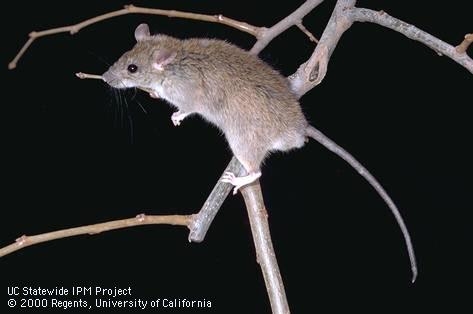