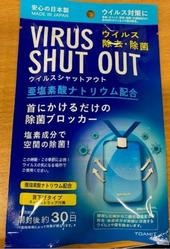 U.S. EPA Acts to Protect the Public from Unregistered “Virus Shut Out” Product Imported into Honolulu and Guam