Recent Detection of Huanglongbing Disease in Riverside
Published on: July 28, 2017 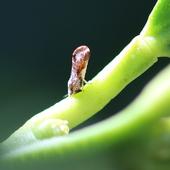 Inspect the new flush on citrus trees to see whether the tree is infested with Asian citrus psyllid. (View a four-minute video below.)

A tell-tale sign of spring in California is a flush of new leaf growth on citrus trees. Because the feathery light green leaves are particularly attractive to Asian citrus psyllids (ACP), the leaves' emergence marks a critical time to determine whether the pest has infested trees.

“We encourage home citrus growers and farmers to go out with a magnifying glass or hand lens and look closely at the new growth,” said Beth Grafton-Cardwell, UC Agriculture and...