Two identical looking species of wood-boring beetles, collectively known as invasive shothole borers (ISHB), have killed thousands of trees in Southern California and pose an ongoing threat to California's urban and wildland forests. These beetles, which are not native to the United States, were first identified in Los Angeles County in 2012 and have since spread to six other counties: Orange, Riverside, San Bernardino, San Diego, Santa Barbara, and Ventura. 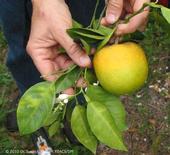 This week, we put the spotlight on invasive species and how these non-native plants, animals, and pathogens damage California's economy and environment.

You Can Make a Difference

Shot hole borers and the diseases they carry, and Asian citrus psyllid and huanglongbing disease are serious invasive pests of concern. Do your part to help prevent their spread. If you go camping this summer, don't move firewood from your home to the campground. For backyard citrus growers, find out if you are in a quarantine zone for Asian citruspsyllid. You can make a difference. Read the posts above to find out...