Many consumers are asking for environmentally-friendly services when they hire companies to manage pests in and around their homes. Likewise, a number of California municipalities, institutions, and school systems are requiring pest management contractors to provide evidence of an IPM certification or to follow specific IPM practices. At the same time, advocacy groups such as “GotAnts? Get S.E.R.I.O.U.S.” http://www.gotantsgetserious.org/ are encouraging... 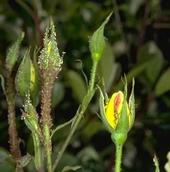 The recent warm spring weather has stimulated aphid outbreaks in many landscapes and gardens. Two short YouTube videos from the University of California Statewide IPM Program show how to battle these pests without pesticides.

Hosing Off Aphids demonstrates techniques for knocking off aphids with water.

In Aphid-eating Insects in Action see lady beetles, syrphid flies, lacewings and other "natural enemies" hunting and gobbling up aphids.

Figure 1. The adult male (shown here) of the spotted wing drosophila has a black spot on its forewings but the female doesn't.

Spotted winged drosophila (SWD), Drosophila suzukii, is a fruit fly that first arrived in California in the late 2000s and now is present throughout most of the state (Figure 1). It can attack various berry crops including strawberries, raspberries, blackberries, and blueberries; however, in backyards most complaints come from gardeners who grow cherries.

Unlike other fruit flies that attack fruit only after it has ripened and is starting to deteriorate, SWD attacks healthy fruit on the tree... 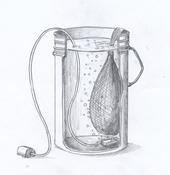 The fundamentals of compost tea are very simple: it's merely compost suspended in a porous bag (like cheesecloth) and soaked in water. If the compost was of good quality, then the water typically takes on a dark, blackish color (appearing a lot like a strong black tea). However, compost tea quality depends on the quality of the parent compost, and compost can vary quite a bit in its makeup, depending upon...