First developed in the late 1980s, neonicotinoids represented the first new class of insecticides in over 50 years. They are insect nervous system toxins widely used in horticulture, agriculture, and structural... 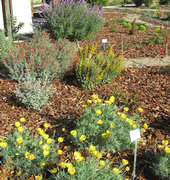 Anything used to cover the surface of the soil in a landscape or garden is called mulch. Most retail nurseries and garden centers sell a variety of mulch products in smaller bagged quantities or rolls. Mulch may be inorganic, like rock or chipped rubber; organic, such as straw, shredded leaves, chipped wood or bark; or synthetic landscape fabric. Mulch is often confused with compost; but while compost may be used as mulch, its primary use is as a soil amendment. Generally, larger-sized organic materials used...

Drain flies, also called moth flies, are small flies that develop in decaying organic matter in sink or sewer drains. Their wings are covered with fine hairs, giving them a moth-like appearance. When many adults emerge at the same time, they can become a nuisance in homes or a health concern in commercial kitchens, processing plants or health care facilities. Regular inspection of drains and elimination of breeding sites are essential for keeping drain flies under control.

Read more about biology and management about these pests in a new UC IPM Pest Note: Moth and Drain Flies by David Theuret and Alec Gerry, Entomology, UC Riverside.

The myporum thrips is a tiny, recently-arrived insect, native to New Zealand, that has been devastating two species of myoporum (Myoporum laetum and M. pacificum) widely planted in California landscapes. These species have been popular because of their visual appeal and low maintenance and water requirements. Feeding by the thrips severely distorts new leaves and terminals, making plants unsightly.

This pest is very difficult to manage, although systemic insecticides can provide some control. Many gardeners may choose to replant with non-susceptible plant species. Read more about biology and management of this pest in the new UC IPM Pest Note:...

Life Cycle. The immature stage of the codling moth is the infamous “worm” in the apple or pear (Figure 1). This pest spends the winter as a mature larva in a pupal case on trunks of trees or in debris around the home orchard. When spring temperatures rise in March, pupae mature and adult moths begin emerging...