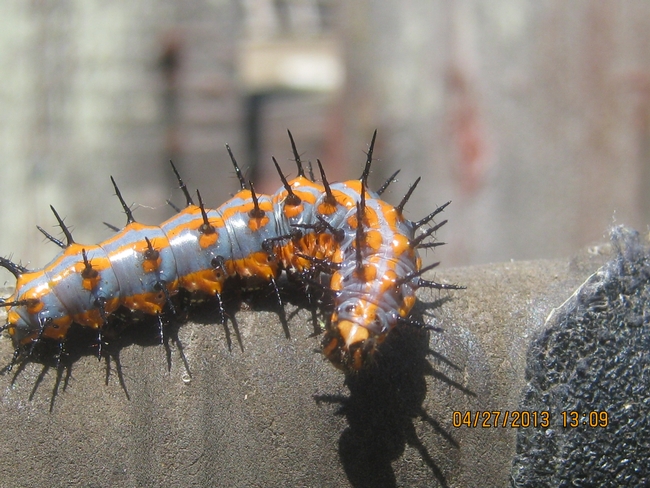 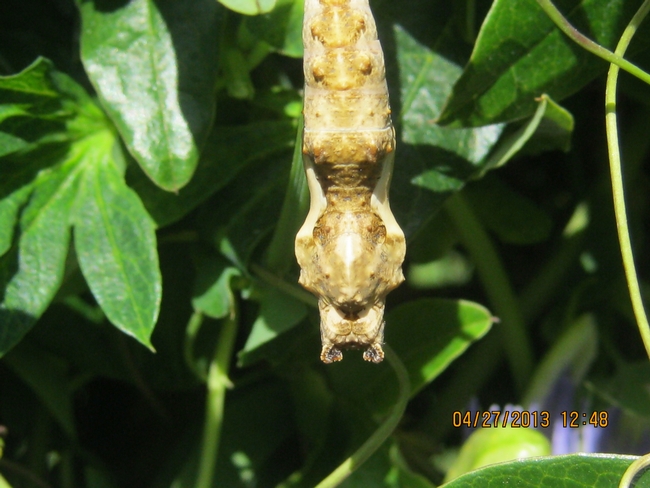 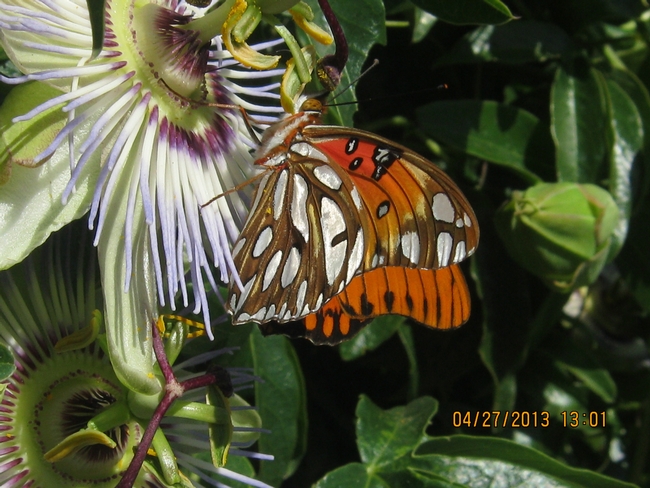 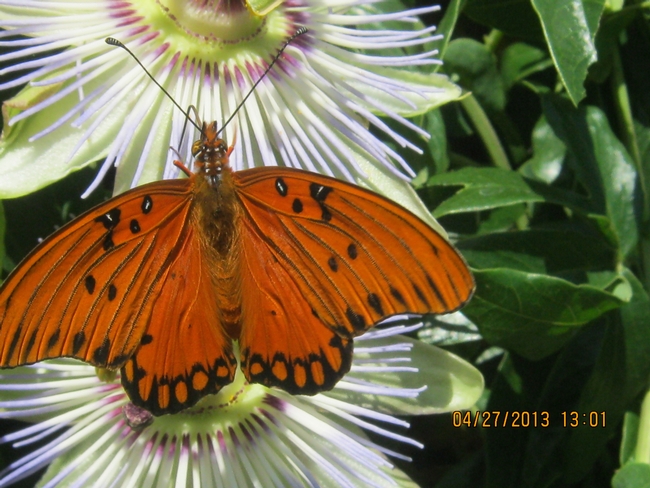 Here's the tale.   We have a thriving Passion Flower vine (Passiflora caerulea 'Blue Crown')  .  (http://oregonstate.edu/dept/ldplants/paca1.htm).   My neighbor likes the flowers and the three butterflies that constantly flutter around it.  But she doesn't like messy plants.  So, last year she told her housemate to "cut back" the vine on their side of the fence because it was invading.  When she wants work done, he does what she says--or there could be hell to pay.  Since he doesn't know the meaning of the word "prune," that's exactly what he did---CUT.   He sheered the vine on their side--like a chainsaw cutting straight down along the fence.  The vine on my side simply "folded" over (like a soft flour tortilla).  OMG!   %#!*&@.  Yeah, I was ticked off but, mostly, simply astounded.

I calmed myself and said, next time CALL ME, and I'll take care of it.  I understand that the "tentacles" grow very fast and that the fruit ripen, shrivel, fall to the ground and create new shoots.  Alas, I chose the wrong species and, although the orangish fruit is edible, it tastes like absolutely nothing.  I try to pull it and discard it.  But the purple-white-yellow flowers that turn to fruit are beautiful.

My husband said to just leave the vine "as is" for awhile--see if/how it recovers.  Think about the butterflies, he said.  Where will they go if the vine dries up and dies?  Will we lose them forever, never again see them twitter around all day?  Perhaps they'll stick around and flutter around the heap of vegetation now lying on the ground.  So, let it be for now, he says.

But, that's not me.  I start cutting back.  Everything is intertwined (hey, it's a vine), so if you "pull" something, things break off and that's that.  Well, I get to whacking, then the point of no return.  I cut the whole darn thing back to pretty much three 1-inch diameter, 2-foot  high stumps, so to speak.  Maybe I just wanted my neighbor to understand the consequences of his actions?  Maybe I thought  it hopeless that the heap lying on the ground would recover?  Perhaps my husband was right.  But... oops, too late.  In the end, I figured either it'll live or it'll die-that philosophy thrives in my yard.  I did leave a couple tentacles with leaves so that maybe the butterflies would stay.

Well, the darn thing came back.  Thriving.  Weaving in and out and all around is the family of three butterflies, Agraulis vanillae (Gulf fritillary).  Art Shapiro (butterfly expert and professor of ecology and evolution at UC Davis), says the gulf frit was first  recorded in the Bay Area before 1908 and became "established" here in the 1950s and that there are fewer gulf frits in Sacramento in the last few years.   Wow, I am so glad they're in my backyard.  For more info, see:  http://ucanr.org/blogs/bugsquad/index.cfm?tagname=gulf%20fritillaries.   For photos, see   http://ucanr.org/blogs/blogcore/postdetail.cfm?postnum=5850.   For photos of another frequent visitor,  Xylocopa varipuncta (Valley carpenter bee),  see http://ucanr.org/sites/gardenweb/?blogtag=Valley%20carpenter%20bee.

Anyway... we constructed a trellis a foot from the fence, so we can monitor the vine's  "tentacles" and direct them to stay on our side.   Oh yeah, last month my neighbors cut back their Privet (Ligustrum spp.).  It had become a very big and intrusive tree, plus it was crowding out my Snowball bush (Viburnum opulus).  I told him to go ahead and trim the snowball bush and showed him where to "stop" the cuts.  But, guess what?  He decided not to touch the dang thing. 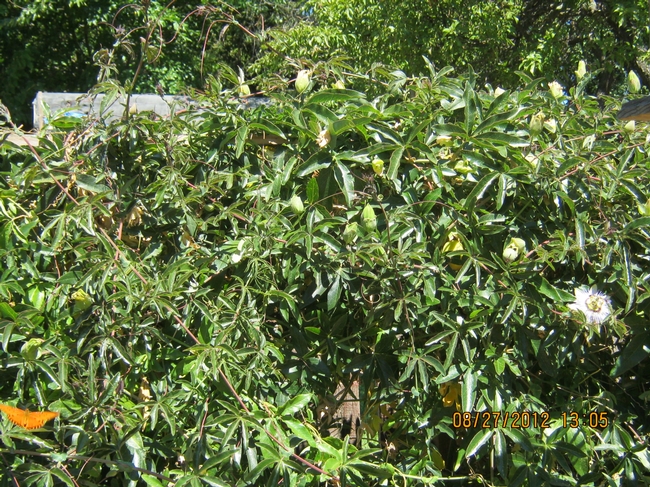 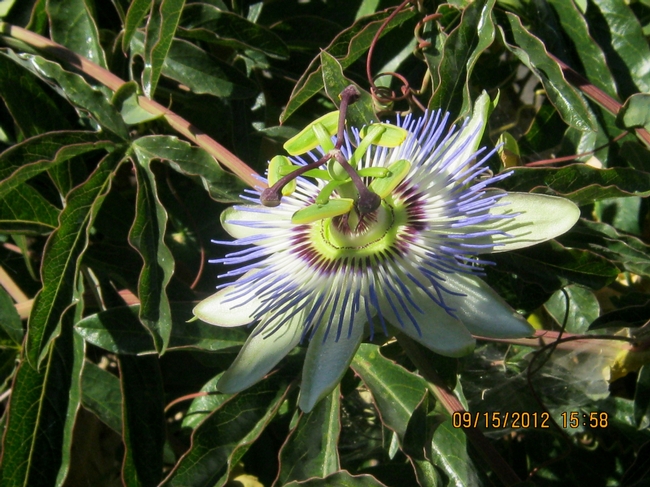 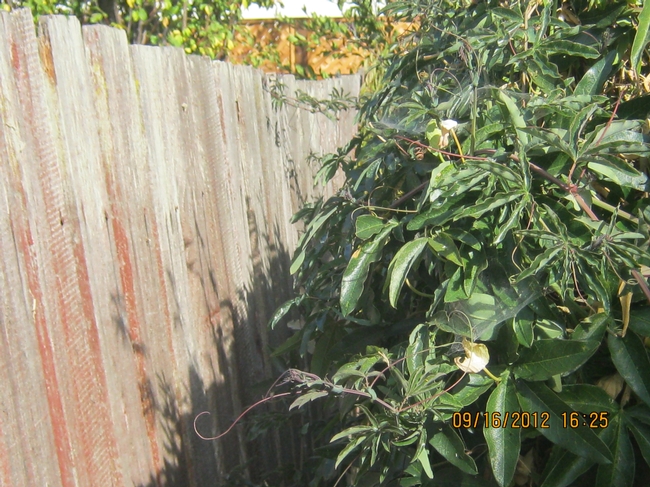