I've been growing pineapple guava, Feijoa sellowiana, for years now.  When I was first putting my landscape in, after I moved to Fairfield, I wanted to include things that you could eat. I also wanted to have things that were fairly drought tolerant.  I have a small yard, so I was somewhat limited in choices. I didn't have room for an orchard. I was attracted to the pineapple guava plant because it was different than the standard fruit. It has glossy medium green leaves that are silvery on the underside. It has an unusual edible flower with multiple red stamens.  The fruit is admittedly a bit homely, a green oval  about two to three inches long.  Another selling point for pineapple guava was that you didn't have to agonize over when it was at the perfect state of ripeness; when it was ready, it just fell to the ground and you picked it up.

Fast forward over twenty years. My three pineapple guava shrubs have done very well. Many jars of jam and chutney have been made and many muffins have been baked. The shrubs have been pruned back yearly in December (not the optimal time) so that I could give bagfuls of branches to the Master Gardener Wreath Workshop.  As the shrubs grew in circumference and density harvesting the fruit became a bit more challenging.  The ground is covered in Vinca minor, so sometimes the fruit would seem to just disappear when it hit the ground.  When it would fall inward near the trunk, it would take a lot of bending or scrabbling about on my hands and knees to reach back and get it.  Sometimes, while doing this, smaller branches would whip back and hit me in the face or arms.

Harvest season always seems to take me by surprise. It usually starts in late September or early October and goes for four to six weeks.  Each year I find myself thinking “It’s too soon. Summer can't really be over yet, can it?"  This year was the same, I went around to the side yard to water and there they were scattered on the ground.  I picked up a few easy ones then peered into the darkness underneath the shrubs where I could see many more. Now unfortunately, I have been having a bit of a flare up of my low back pain. When I saw those fruit, I   thought there was no way I was going to be able to crawl around under those shrubs. Visions of clouds of flies and fruit flies feasting on rotting fruit flew through my brain.

Suddenly I thought of my EZ Reacher tool, which I usually use to get stuff that falls behind bookshelves or between the washer and dryer.  It worked perfectly to pick up the fruit. It didn't crush or bruise the fruit at all. I didn't have to put any strain on my back.  I didn't have any scratch marks on my face or arms from the smaller branches.  For the life of me, I can't figure out why I didn't think of this sooner.  I guess I had just mentally put that tool in the storage section marked "Indoors" in my brain.

Now I am probably going to find out that I am the last person to figure this out and that the rest of you have been using this for years in your garden.  But just in case I am not the last person, thought I would put it out there, as it might save some pain and strain for someone else. 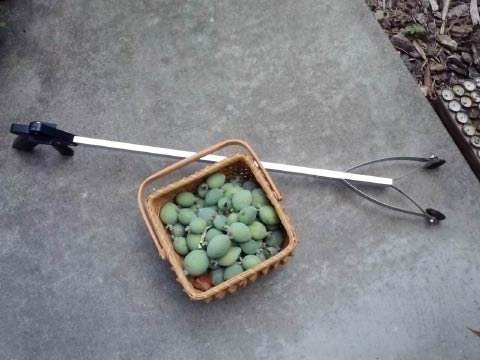 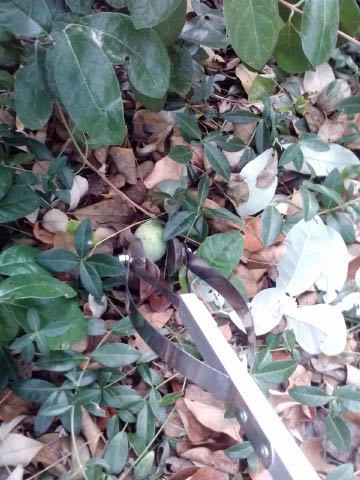