Bougainvillea, a genus native to South America has found a home in many, many gardens..  “Discovered” by a French naturalist Dr. Philibert Commercon in 1768, he named the plant after his friend and ship’s admiral Louis-Antoinede Bougainville who sailed around the world between 1766 and 1768 with Dr. Commercon on board.  By the early 1800’s two species were introduced to Europe while Kew Gardens distributed their propagated specimens to the British Colonies throughout the world.

The many species are relatively pest and disease free but are sensitive to frost and if they survive will behave as deciduous shrubs, dropping their leaves in the winter with new leaves emerging in the spring.  As this shrub/vine is an exotic beauty, it isn’t the most hardy choice for all of Solano County.  It does very well in Sunset zone 17 (most of Vallejo and Benicia) and can be a good “container on wheels “ choice for Fairfield,  Davis and Dixon’s zone 14.  In zone 9, Vacaville, it would take a lot of effort to protect this shrub from the frequent winter frosts and cold.  If you can manage to give this shrub the environment it needs, you will be grandly rewarded with an exuberant mass of color.  Although the true flowers are tiny, they are surrounded by intensely colorful bracts in red, purple, and magenta.  Other milder colors are available, but for the most part I see only the intensely colorful species in our environs.

So now to my dilemma, I have had too much of a good thing.  I inherited a number of well established bougainvilleas (aka bougies) when I moved into my home in Glen Cove. Two of the shrub/vines dominate the front garden. One has climbed up the garage wall and onto the roof below the 2nd story.  Another is near the property line on the other side of the garage.  The wall climber has required quite vigorous pruning (hacking) every year just to keep it in bounds. The 2nd grows so lushly it topples over once we get a good rain storm.  I prop it back up and its none the worse for wear, except that it will fall over again and again until the rain’/wind storm subside in the spring.

Our son has been providing the big ladder pruning help each year until he moved out of the area.  Don’t think this was an incentive to leave, at least hope not.  So my husband and I have climbed up the big ladder and hacked at the long canes trying to corral them each year.  Enough, late this past fall, we got out the loppers and cut the whole shrub down to about five feet tall.  As spring has progressed we have been thinking what should we do with this shrub. We love the color but the maintenance is just too much.  So , I had an ah ha moment.  Let’s do an espalier and keep it to a height I can easily reach with my pruners.  Of course, we are giving up the big drama, but we are also avoiding the “waiting to happen” problems the use of really big ladders invite.

Also, we decided to bungee cord the other bougie and attach it to an eye-hook a couple of years ago.  This has worked wonders, no more falling bougie! 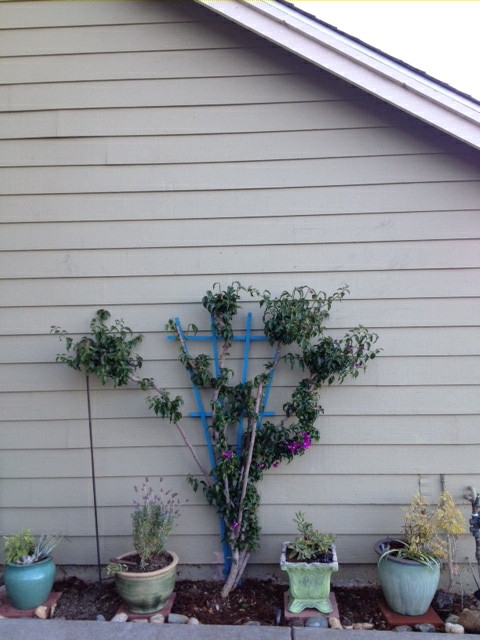 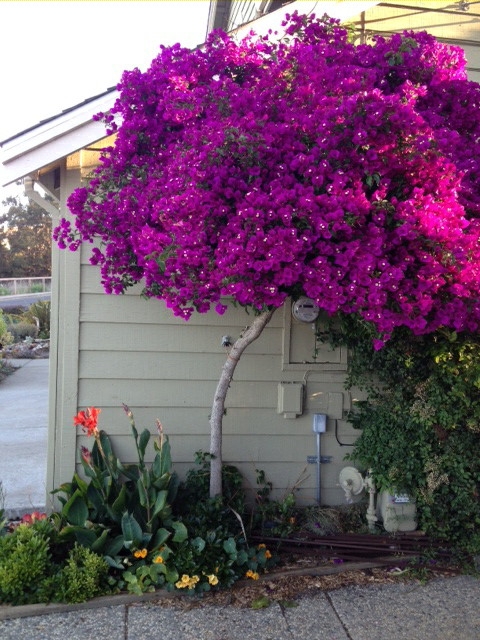 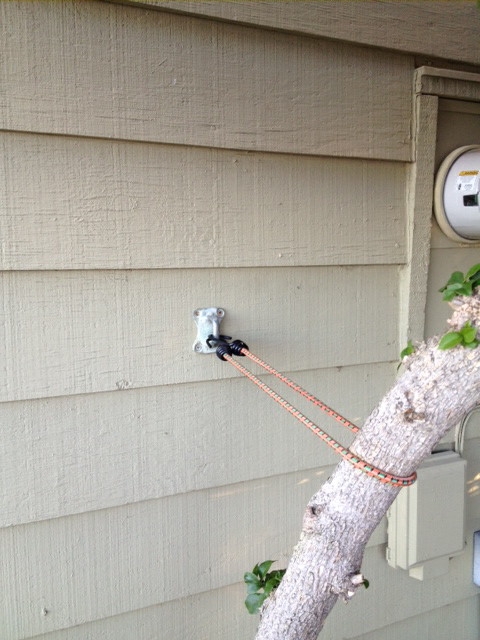