A 60-foot tower near the UC Cooperative Extension office on South Mt. Vernon Avenue in Bakersfield has been built to hold instruments aloft for air quality studies in the area, the Bakersfield Californian reported.

Researchers from around the country are conducting the studies to gain a deeper understanding of the environment and to inform air quality regulatory policy.

"You need to measure what's in the air, and then from that you go back and look at crafting regulatory policy," UCCE farm advisor John Karlik was quoted. "But science has to precede policy."

The tower is hosted by the UC Cooperative...

There's been some confusion in recent years about the impact of animal agriculture on global warming. UC Davis Cooperative Extension air quality specialist Frank Mitloehner will share his findings on the subject this month during a free webinar on the eXtension website, according to an article in Pork magazine.

The 2006 United Nations report "Livestock's Long Shadow" said the livestock sector is responsible for 18 percent of greenhouse gas emissions, a higher share than transportation. Mitloehner said livestock's contribution is more like 3 percent, yet wide distribution of the misinformation has put Americans and others on the wrong path toward... 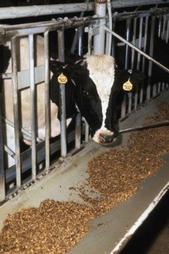 A dairy cow eats its rations.

Research by UC Davis scientists that revealed a substantial amount of San Joaquin Valley ozone is generated by animal feed is getting wide coverage in the news media. Google News reported 126 articles on the subject.

Many newspapers ran the Associated Press version of the story, written by Fresno-based Tracie Cone. She reported that the study — funded by the U.S. Department of Agriculture, California Air Resources Board and the San Joaquin Valley Air Pollution Control District — was initially intended to measure the impact of animal manure, urine and flatulence on ozone levels.

UC Davis nutrition professor Paul Davis reported that walnuts slowed prostate tumors by 30 percent to 40 percent in mice, according to a UPI article. The dose was equivalent to 2.5 ounces for a typical man. Not only was prostate cancer growth reduced, but the mice had lower blood levels of a protein that is strongly associated with prostate cancer.

Wildfire was not unusual in prehistoric California.

As 323 active fires in California threaten more than 10,000 homes, commercial buildings and other structures, the Sacramento Bee today offered a small consolation. Even though air quality is poor and the state has already spent more than $100 million fighting blazes, the situation isn't really anything abnormal.

The Bee story, citing research by UC Berkeley environmental scientists that was led by Scott Stephens, said the amount of land burning pales compared to acreage consumed historically, before Europeans settled in California.

"The scientists estimated that an average 4.4 million acres burned annually in California before 1800,...