The Post sought information from the UC Agricultural Issues Center (AIC), a statewide program that is part of UC Agriculture and Natural Resources. UC Cooperative Extension was credited as a source for a chart that accompanied the article that noted the crops most vulnerable to labor-cost change....

No matter what happens with immigration reform, the United States will likely suffer a shortage of farm labor in coming decades, reported the Washington Post. The story was based on a study titled "The End of Farm Labor Abundance" by Edward Taylor, professor in the Department of Agriculture and Resource Economics at UC Davis, UC graduate student Diane Charlton and Antonio Yúnez-Naude, professor in the Center for Economic Studies at El Colegio de Mexico in...

E-Verify, which checks information from an employee's I-9 Employment Eligibility Verification Form against government records to determine U.S. employment eligibility, is already in use in Arizona,... 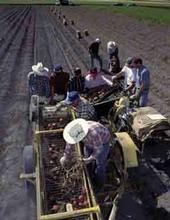 The move toward mechanical harvesting would likely accelerate with strict immigration enforcement.

The story was based on research by agricultural economists at UC Davis and the U.S. Department of Agriculture. The report, titled “Labor Trajectories in California’s Produce Industry,” found that changes in the way immigrant labor is regulated in the U.S. would increase the cost of labor for California's $20 billion fresh fruit, nut and vegetable industry.

“California’s produce industry depends on a constant influx of new,...