European grapevine moth, native of Italy, made its way to the U.S. in 2009, where it was first detected in Napa County vineyards. 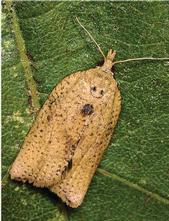 LBAM is in California to stay.

A recently certified report on light brown apple moth asserts that the pest, native to Australia, cannot be eradicated from California.

"Given the increases in LBAM population densities and the extent of contiguous spread of LBAM observed over the past 2 years, coupled with a lack of area-wide management tools, eradication is no longer feasible in California," the USDA report says.

The "area-wide management tools" referred to in the report includes aerial pheromone spraying, which drew the ire of many environmentalists. Instead, control will be attempted with twist-ties that release pheromones and...

The European grapevine moth "snuck in under the radar" about the same time agricultural officials were beginning releases of sterile light brown apple moth, the...

USDA scientists released 3,000 sterile light brown apple moths yesterday in a Carneros vineyard, according to an article in the Sonoma Index-Tribune. The scientists hope that flooding the environment with sterile moths will prevent females from mating with normal moths and producing offspring.

Reporter Emily Charrier-Botts wrote that UC Davis entomologist James Carey does not expect the program to be successful. He said releasing sterile insects has eradicated only one pest in history - the screw-worm fly. (Screw-worm fly maggots, a livestock pest, feed on...
Read More

Light brown apple moth larva.
A panel of 10 scientists, economists and USDA employees released a report yesterday that said the USDA's characterization of light brown apple moth as an "invasive threat" was correct, but the federal agency didn't back up the assertion with sound science, according to an Associated Press story.

The panel, convened by the National Academy of Sciences, includes UC Berkeley entomologist Nicholas Mills. He acknowledged in the article that assessing the potential threat of an invasive species is a very difficult thing to do, and expressed concern about USDA's information gathering efforts.

"We found that people in the agency were sometimes using their best guesses,...
Read More