Fran Keller
When Mary Frances "Fran" Keller, doctoral candidate at the UC Davis Department of Entomology, delivers her exit seminar on Wednesday, May 29, the audience will get a glimpse of all the titles she holds.

In her private life, she's a wife and mother.

Her specialty: darkling beetles. You'll often find her at her "home away from home," the Bohart Museum of Entomology where she studies with major professor Lynn Kimsey, Bohart Museum director and UC Davis professor of entomology.

Fran Keller is the designer and impetus  behind the many Bohart Museum of Entomology posters and t-shirts. Posters include Butterflies of Central California, Dragonflies of California, California State Insect (California Dogface Butterfly) and Pacific Invasive Ants. T-shirts spotlight dragonflies, butterflies and walking sticks. (Access them at the Bohart's online gift shop.)

If you belong to the Entomological Society of America (ESA) or another entomological organization, you've probably seen her leading symposiums, presenting talks, and conferring with other scientists.

There's not much that she CAN'T do.

So, on Wednesday, Fran Keller will probably convince her audience that darkling beetles are more exciting than any other insect. After all, her enthusiasm is well known and led to her UC Davis honor as an outstanding teacher.

Keller's exit seminar, "Taxonomy of Stenomorpha Solier, 1836 (Coleoptera: Tenebrionidae: Asidini,"  will be from 12:05 to 1 p.m., Wednesday, May 29 in Room 1022 of the Life Sciences Addition, located on the corner of Hutchison and Kleiber Hall drives. Plans call for the seminar to be videotaped for later public viewing on UCTV. “Certain Stenomorpha species occur in California vernal pools but are not listed as vernal  pool species,” Keller said.  She also will discuss the importance of taxonomy in conservation.

Keller received her associate science degree in biology and chemistry, with highest honors, from Sacramento City College in 2001 and then transferred to UC Davis where she received her bachelor’s degree in evolution and ecology (2004), and her master’s degree in entomology (2007).

Her students applaud her teaching skills, her enthusiasm, and her care and concern. Said one student: "It's reassuring to know that out of a maze of 30,000 students and faculty at Davis that there are people like Fran who really care." 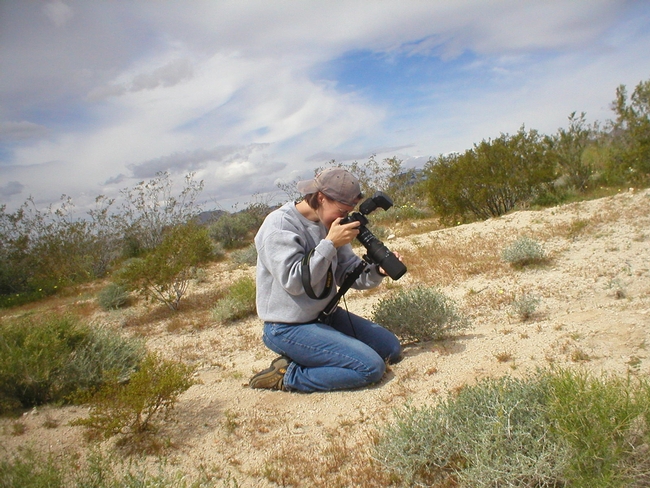 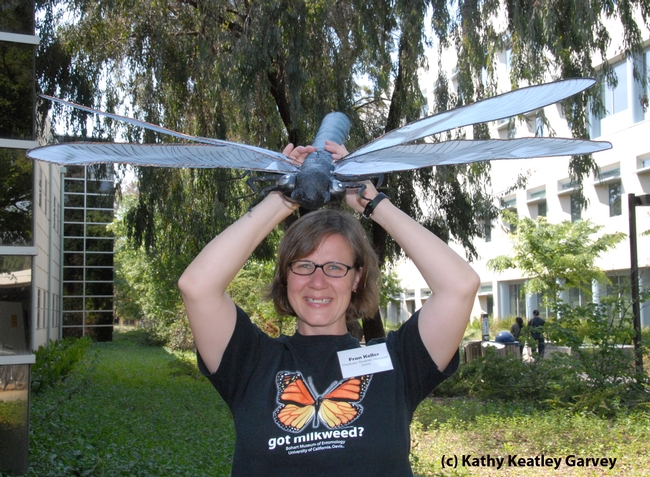 Fran Keller is a big fan of all things insects. She designed the monarch t-shirt. (Photo by Kathy Keatley Garvey)
Tags: Bohart Museum of Entomology (388), darkling beetles (2), Fran Keller (39), Lynn Kimsey (292)
Comments: 1
Comments:
by Steve Cline
on October 3, 2013 at 5:46 AM
I just purchased a beautiful water painting by (Fran Keller) in Wisconsin and it was framed by Alaska Art Frame Obeidi's Art Gallery. Would this happen to be one of hers?
Leave a Reply: