Ivana Li with entomology display in Briggs Hall. (Photo by Kathy Keatley Garvey)
DAVIS--Ivana Li, who will receive her bachelor’s degree in entomology on June 16, was honored as the "Outstanding UC Davis Senior in Entomology" at a recent ceremony conducted by the Cal Aggie Alumni Association (CAAA).

Li, who grew up in Monterey Park, near east Los Angeles where she learned to love  insects, was nominated for the senior award by Professor Sharon Lawler of the UC Davis Department of Entomology and Nematology. “Ivana Li exemplifies the kind of leader, community organizer and entomology that our department seeks to produce," Lawler wrote.  "She has especially excelled in her entomology courses and in leadership. Ivana Li is a true entomology and UC Davis success story.”

“Although initially shy, Ivana took advantage of the welcoming atmosphere here to not only develop intellectually, but to flower as a focal personality in the community of entomology students and faculty. She is a key player in virtually all of the outreach our department offers, from leading the Bohart Museum of Entomology tours for schoolchildren and assisting at open houses to developing and hosting UC Davis Picnic Day displays.”

Lawler also praised Li for installing the “major, eye-catching interpretive display of insects that lines a corridor in our department. It is informative, engaging and of a quality that rivals any professional museum.”

Active in the UC Davis Entomology Club, Li has held most of the offices, including president, and her “efforts have been key in making the club thrive,” Lawler said.  The club is a valuable forum for outreach, peer mentoring and marketing, according to club advisor Robert Kimsey, forensic entomologist.

As an artist, Ivana has combined her research with her humorous side via Bohart Museum of Entomology t-shirts and by participating in a landmark paper, “A Phylogeny and Evolutionary History of the Pokémon,” published in the Annals of Improbable Research (AIR) in July 2012. The paper is a humorous take on the evolutionary development and history of the 646 fictional species depicted in the Pokémon media over the last 16 years

Li works at the Bohart Museum of Entomology, home of nearly eight million insects. The entomology display she created for the Briggs third-floor hallway, was funded by a Bohart Museum grant, and completed within a four-week period. Assisting her from the Bohart were Lynn Kimsey, museum director and professor of entomology; senior museum scientist Steve Heydon; and Tabatha Yang, education and outreach coordinator. Yang wrote the grant.

Visitors can see everything from dragonflies, butterflies and honey bees to beetles, flies, ants and other insects.

Her future plans include enrolling in graduate school. 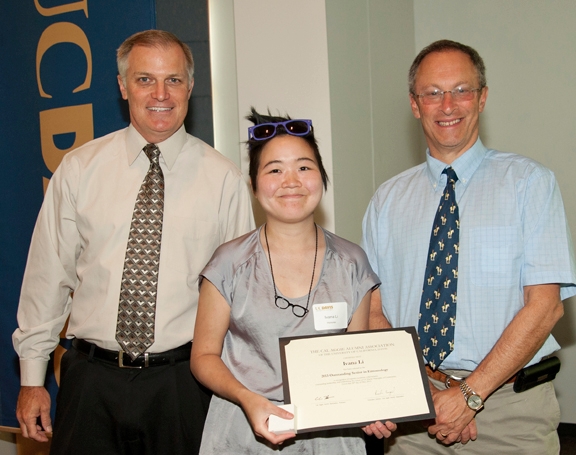