Ed Lewis, professor and vice chair of the UC Davis Department of Entomology and Nematology, presents bee art to Debbie Jamison, State Regent of California State Society of the Daughters of the American Revolution. The art is the work of self-described “rock artist” and beekeeper Donna Billick. (Photo by Martha Ozonoff)
DAVIS—For Debra “Debbie” Jamison of Fresno, it’s always been about the bees. The honey bees.

“I have had a lifelong love and respect for bees and I spent a lot of my childhood watching them, attracting them with sugar water, catching and playing with them and even dissecting them during a time when I imagined myself to be a junior scientist,” Jamison said. “Back in those days, there was an abundance of bees, usually observed by this kid in her family’s backyard full of clover blossoms—something you rarely see any more due to spraying of pre-emergents and other weed killers.”

So when Jamison became state regent of the California State Society of the Daughters of the American Revolution (DAR), she adopted the motto, “Bees are at the heart of our existence” and vowed to support research to help the beleaguered bees. Her project resulted in DAR members raising $30,000 for bee research at the Harry H. Laidlaw Jr. Honey Bee Research Facility, University of California, Davis.

“Every state regent has a fund-raising project; I chose honey bees,” said Jamison, whose first name, Debra, means “bee” in Hebrew. Fresno, in the heart of San Joaquin Valley, is “The Food Basket to the World,” Jamison said, and  “a place where we grow a large variety of crops that require bees for pollination.”

“When the California State Society Board of Directors approved this project, we knew that it was an important one,” she told the crowd at a recent ceremony at UC Davis. “However, we did not know just how vital this project would be until we began talking to staff at UC Davis.  We hope that our contribution helps provide needed funding for the extremely important research going on at this well-known and well-respected facility.”

Jamison and her state regent project chair, Karen Montgomery of Modesto, presented the $30,000 check to Edwin Lewis, professor and vice chair of the UC Davis Department of Entomology and Nematology, and bee scientist/assisant professor Brian Johnson at a ceremony in the department's Häagen-Dazs Honey Bee Haven on Bee Biology Road. More than 125 DAR members from throughout California attended. Lewis gratefully accepted the check on behalf of the department and noted that his mother, Betty Lewis, is an active member of the DAR Owasco Chapter in Auburn, N.Y. “My mother would definitely approve of this project,” he quipped. Lewis gifted Jamison with a mosaic ceramic figure of a bee, crafted by Davis artist Donna Billick, co-founder and co-director of the UC Davis Art/Science Fusion Program.

The funds will be used in the Johnson lab. His graduate student, Gerard Smith, researches the effect of pesticide exposure in the field on honey bee foraging behavior, and graduate student Cameron Jasper studies the genetic basis of division of labor in honey bees.

Johnson and fellow UC Davis bee scientists Neal Williams and Robbin Thorp discusssed their work and the importance of bees as pollinators. Williams, an assistant professor, researches wild or non-managed bees. Thorp, a native pollinator specialist and emeritus professor of entomology, does research on bumble  bees and other bees. Like Lewis, Thorp is closely linked with DAR: his mother, the late Elizabeth Thorp was active in the Algonquin Chapter, Benton Harbor, Mich.

The “Year of the Bee” began when Jamison and her fellow DAR members studied what she called  “the amazing history of beekeeping that goes back more than 2000 years.” In doing so," we gained a new perspective on the necessary work these small insects perform” for humankind.

Jamison thanked Fresno beekeeper Brian Liggett and Cooperative Extension specialist Eric Mussen of the UC Davis Department of Entomology and Nematology for helping educate them about the bees. Among the others she acknowledged were Christi Heintz, director of Project Apis m., “who provided information on the plight of bees and helped us get in contact with UC Davis.”

The DAR members toured the Laidlaw research facility and the half-acre Häagen-Dazs Honey Bee Haven, which is designed to provide a year-around food source for the Laidlaw bees and other pollinators; to raise public awareness about the plight of honey bees; and to encourage visitors to plant bee-friendly gardens of their own. A six-foot-long ceramic mosaic sculpture of a worker bee, crafted by Billick, anchors the garden.

The Almond Board of California provided packages of almonds for the crowd.

Not missed was the DAR/bee connection: a gift from the nation’s oldest genealogical society to support one of the world’s oldest--and the most beneficial--insect,  the honey bee.  European colonists brought the honey bee to the Jamestown Colony, Virginia, in 1622, some 153 years before the American Revolution. Native Americans called it “the white man’s fly.” Honey bees did not arrive in California until 1853, transported via the Isthmus of Panama.

The U. S. honey bee population has declined by about a third since 2006 due to the mysterious malady known as colony collapse disorder (CCD), said Mussen, attributing CCD to multiple factors including disease, pests, parasites, pesticides, malnutrition and stress.

Founded in 1890 and headquartered in Washington, D.C., DAR is a non-profit, non-political volunteer women's service organization dedicated to promoting patriotism, preserving American history, and securing America's future through better education for children, Jamison said. Its worldwide membership totals some 170,000 descendants of American Revolutionary War patriots in 3000 chapters. More than 890,000 women have joined DAR since its founding 123 years ago. The California State Society, founded in 1891 and based in Glendora, is comprised of nearly 9,900 members. 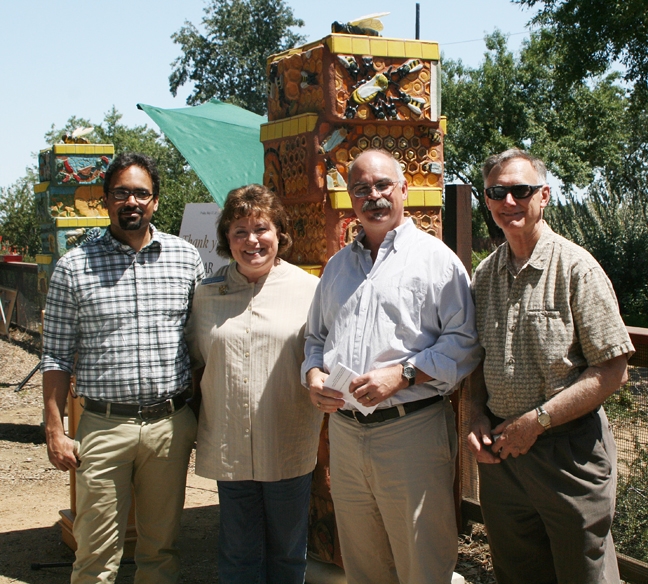 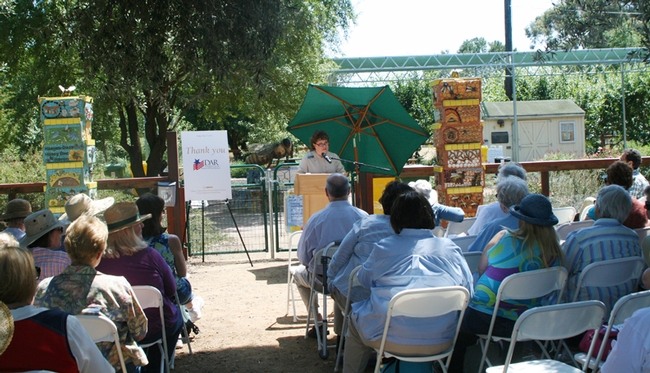 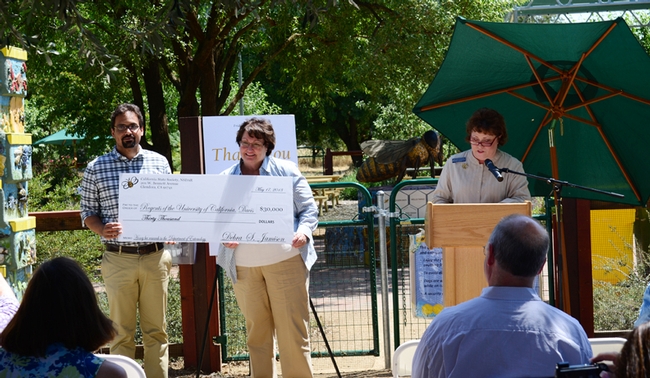 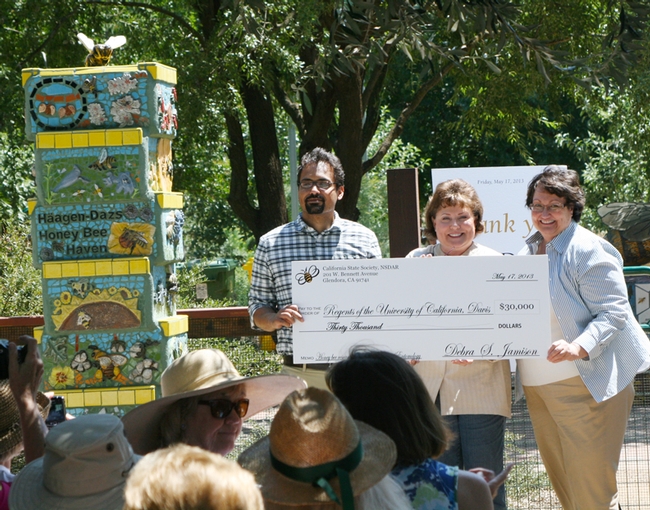 Bee scientist Brian Johnson, assistant professor of entomology, UC Davis Department of Entomology and Nematology, receives a $30,000 check from Debbie Jamison (center) of Fresno, State Regent of California State Society of the Daughters of the American Revolution and Karen Montgomery of Modesto, chair of the state regent’s project. (Photo by Martha Ozonoff) 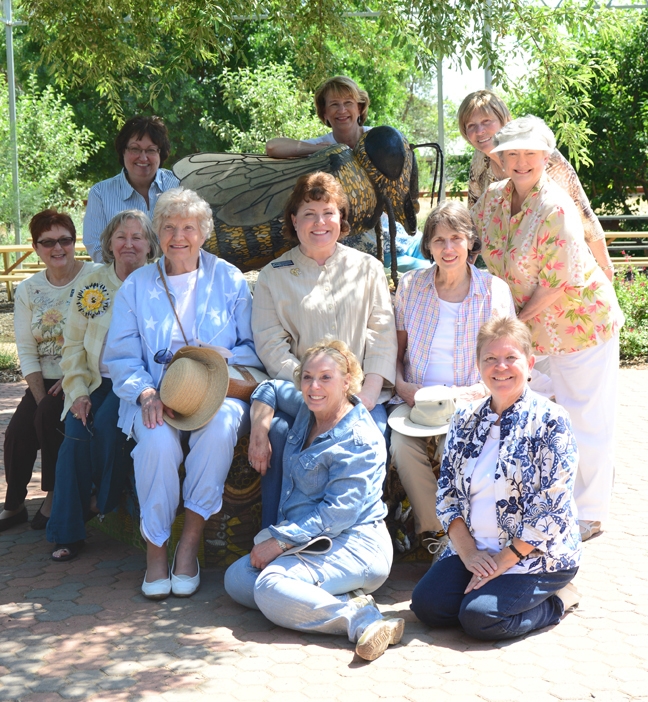