Growers in the Imperial Valley, CA increasingly planted alfalfa during the 1980’s in heavier soils on raised beds as the field became more available due to diminishing cotton acreage. Growing alfalfa on raised beds with furrow irrigation helped growers to better manage alfalfa planted in heavier soils. Furrow irrigation of alfalfa on raised beds also provided ideal conditions for survival of cutworms, creating chronic cutworm pest problem by mid- to late-1980’s persisting until today. In this low desert alfalfa, the granulate cutworm, Agrotis subterranea (Fabricius) became predominant cutworm replacing the variegated cutworm, Peridroma sausia (Hübner). The increase in cutworm moth activity also caused the granulate cutworms to become a pest of flat-planted alfalfa that is flood irrigated between borders, but to a lesser degree than on the bed-planted alfalfa. A 1987 UC ANR research finding determined that organophosphate and carbamate classes of insecticides would not control the granulate cutworms in alfalfa. However, pyrethroid insecticides were effective against granulate cutworms, but there were no labels allowing the use of any pyrethroid  insecticides until Pounce 3.2 EC received a California label on alfalfa grown for hay and forage in September 1988.

Adults cutworms are night-flying moths within the insect Family: Noctuidae. After mating, female cutworm moths deposit white or greenish irregular egg masses on leaves or stems near the base of plants. Cutworm larvae are robust, smooth-skinned caterpillars of various colors and patterns reaching lengths of 1.5 to 2 inches when fully grown. Rolling into a C-shape when disturbed is a characteristic behavior of cutworm caterpillars. Cutworm larvae may hide under loose soil, in soil cracks or under duff (loose dead plant materials) during the day, moving to the plants at night to feed. Although granulate cutworms can climb in to the alfalfa canopy to feed at night, it is not uncommon for the larvae to remain under duff and feed on emerging alfalfa shoots; an adaptation mechanism allowing them to avoid predation from birds. Variegated cutworms feed mostly above ground and may climb in to the plant canopy, but generally cause minor damage in low desert alfalfa.

Granulate cutworm is a devastating pest of bed planted, furrow irrigated alfalfa, but can also be a serious pest of flat planted alfalfa flood irrigated, between borders.  Flood irrigation causes cutworms to move to avoid drowning. Therefore, irrigation during daylight hours allows birds to prey on the moving cutworms. Low desert alfalfa fields are most commonly attacked by granulate cutworm from May through October, although it is resident in fields throughout the year. Cutworms can cause stand establishment problems from September through November. In the established alfalfa fields, cutworm feeding can go undetected after cutting and hay removal, but becomes apparent when there is little or no re-growth following the first irrigation. Established alfalfa fields can be severely injured when cutworms cut off new shoots following hay harvest. Feeding by cutworms on shoots slows re-growth and depletes starch reserves in the alfalfa crown; weakening and making crop susceptible to disease.

Management guidelines. Cutworms are most injurious in fields with high plant residue. Pre-plant tillage and abatement of weedy refuge areas around fields help prevent cutworm infestations. Cutworms are more likely to cause problems on bed-planted, furrow irrigated alfalfa than on flat-planted, flood irrigated alfalfa. Flood irrigation drowns many cutworm larvae and if done during daylight hours will attract Egrets, Ibis, gulls, and other insectivore birds that prey on the cutworms as the advancing water forces the larvae from hiding. There are no established monitoring and treatment guidelines for cutworms in desert alfalfa. However, looking under duff and carefully digging to a depth of one inch in loose soil near alfalfa crowns will assist detection of cutworms. When cutworm numbers exceed one or two per foot of row or severe damage is apparent, treatment with an insecticide is usually warranted. 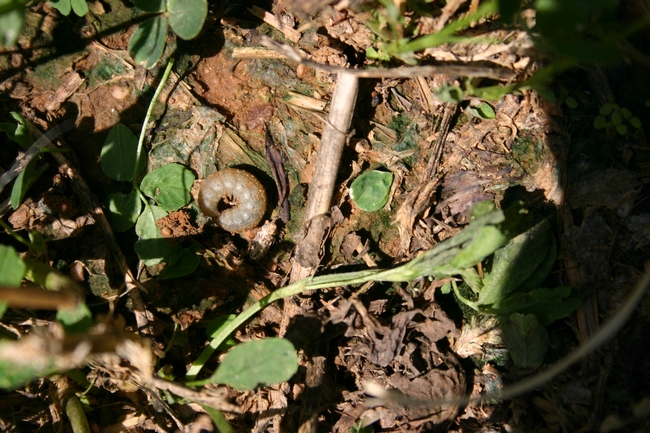 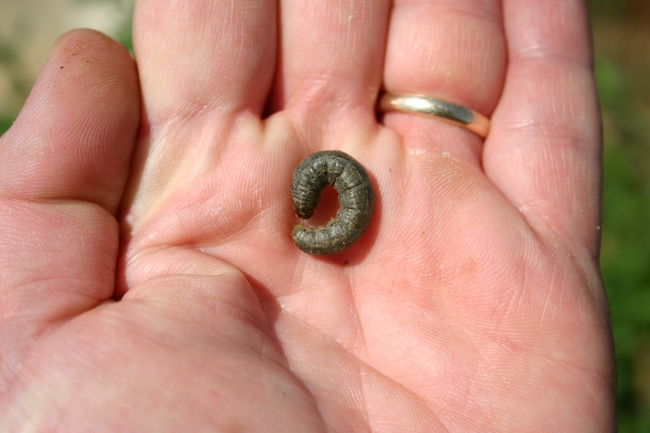