Training and Pruning of Cherimoya
Published on: September 5, 2013

At planting (preferably in spring), if trees have an unbranched trunk greater than 2 feet tall, the tree should be headed back.  This procedure should induce other buds along the trunk to shoot.  Always remove leaves at positions where new shoots are required.  Leaf removal is important since the petiole covers the bud and prevents bud break.  Lower branches with weak crotches (less than 45°, or greater than 90°) should also be removed.

During the first summer one shoot is encouraged to dominate by lightly pinching back the other shoots and loosely tying the main shoot to the stake.  This shoot (leader) will become the tree trunk.

About every three months some pruning can be performed to rapidly create a large framework.  Select primary scaffolds beginning with the lowest facing the prevailing winds.  Select additional scaffolds, upward along the leader at intervals of several inches or more, to form a spiral pattern around the trunk.

Head these scaffolds to 18 inches in length to maintain the central leader.  Remove strong unsymmetrical growth not required as the leader or scaffold branches.  Also remove any limbs with weak crotches.  The position of scaffold branches can be selected by removing a leaf in the desired position, thereby uncovering the bud.

In subsequent years continue to select primary scaffold branches until four to six are present.  Then allow the leader to become the topmost scaffold.  Continue to head back scaffolds.  Each time they are pruned, they tend to produce two strong end shoots.  One or two weaker shoots might also form, these should be removed.  As the pattern continues, the tree will gradually open up.

How heavily to prune depends on the variety and the tree's vigor as judged by the tree spacing, soil and climate.  Unpruned trees initially bear substantially more fruit, but as the canopy becomes crowded, the inside becomes devoid of leaves and fruit, and production moves to the outside of the canopy.  As a consequence, it is more difficult to pollinate and harvest, and more damage to fruit from branch rubbing is encouraged.

From the third or fourth year from planting the goal should be to prune about 6 to 8 inches from the new growth.  This pruning should be done in the spring prior to bloom.  If there is excessive growth during the summer, a light fall pruning may be necessary.  However, heavy cropping will retard vegetative growth.

Each year branches that are crowding the center need to be thinned out along with dead wood.  Fruiting wood that has grown more than 18 inches from the scaffolds also needs to be headed back to prevent the limbs from breaking with the weight of fruit.

The best level of pruning is going to be determined by experience.  The severity of pruning will vary according to the lateral growth each season and cropping level.  Other guidelines are to avoid too much shading within the canopy and to allow enough room between branches so that fruit will set clear of limbs and other fruit. 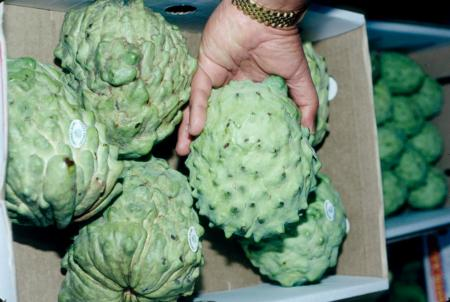