Changing the way people look at food was one of the goals of this month's Symposium On Sustainable Agriculture at UC Davis, an event covered by Sacramento ABC affiliate News 10. The report included an interview with conference participant Lia Huber of the Nourish Network. Huber pointed out that people interact with food at least three times a day.

"People in our rushed society try to get through meals as quickly as possible. When we garden, or go to a farmers market, we have these personal interactions with the land and people who are producing our food. There are ways to connect with food to make the experience much richer," Huber said.

The television report also included an interview with Margaret Llyod, a UC Davis graduate student who was named one of three "White House Farmers" by whitehousefarmer.com. Llyod maintains a garden at UC Davis that provides free greens to anyone who brings a salad bowl. In order to eat fresher food, she said, it must be grown where we work and live.

"There is a great sense of pride when you've grown something yourself. It begins to have a domino effect in your life...how we make our food choices and how we nourish ourselves," Lloyd told the reporter.

Lloyd was among 111 "nominees" to be "White House Farmer." The Web site tallied 56,000 votes during February polling.

The White House farmer project was one of several movements launched by grass roots groups to encourage the new administration to make changes in how food is grown and distributed in the U.S.

In March, a 1,100-square-foot vegetable garden was established on the White House south lawn.

The senior public information representative for UC's Sustainable Agriculture Research and Education Program, Lyra Halprin, said she isn't sure that the people's-choice honor means anything specific, "but I'm sure it contributed to the excitement and buildup and pressure to really do this." 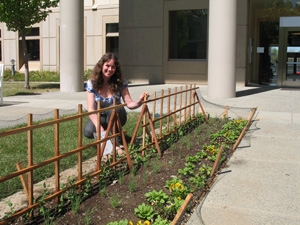