Last spring, I wrote about my introduction to clematis. This blog will cover pruning basics for deciduous clematis.

After I first planted clematis in my yard—and, much to my surprise, they actually grew—it was an additional period of time before I learned that some clematis require pruning. And even more time before I actually bothered to prune them. The impetus for shaking off my slothfulness was the plants’ failure to thrive like I had seen in photos. Sure, each plant grew adequately enough that it wasn’t in danger of being ripped out, but the plants never looked really great. Maybe it was the slightly questionable growing conditions that I had planted them in, but I couldn’t change that now. So pruning seemed like a reasonable option to try.

Much to my dismay, I learned that clematis fall in three pruning groups and that I needed to know which pruning group each plant fell in before pruning it. In turn, I thought this meant that I had to know the names of my plants. And I didn’t. Of course, I had planted the clematis with their labels, but over time, the labels had degraded, disintegrated, or disappeared entirely. (Note to self: get better labels someday!) It took some investigative work digging up old order forms (does anyone besides me miss Chalk Hill Clematis nursery?), research, and guesswork, but I finally came up with a satisfactory list.

Knowing the name of the clematis isn’t essential, however, although it does make it easier to research which pruning group to which the plant belongs. All you really need to do is to understand the flowering pattern of the plant and you will be able to figure out how to prune it. When in doubt, I simply give the plant a light pruning.

Has this made a difference in my plants? I think so. Perhaps it’s my imagination, but each pruned plant puts out more vigorous vines than without pruning. Plus, because clematis don’t have thorns, they are easier to prune than roses!

Here are basic pruning guidelines for deciduous clematis. They are categorized both by flowering type and the group number that you often see when on the plant labels. As always, there may be exceptions to the general rules, so you may wish to research the appropriate methods for the particular clematis in your yard.

Spring-Flowering/Group 1
Group 1 vines flower in the spring on growth from the previous year. Lightly prune right after flowering, if at all, to remove dead wood and neaten them up.

Twice-Flowering/Group 2
Group 2 vines produce two flushes of flowers—the first in late spring or early summer on old growth from the previous year; the second during late summer on the current year’s growth. This flowering pattern makes this group more difficult to prune because if you severely cut the plant back after blooming in the spring, it will limit the fall flush of flowers. Similarly, cutting the plant back severely in the fall will limit the spring flower flush. Accordingly, exercise restraint when pruning plants in this group. If selective pruning is necessary to shape the plant, do it immediately after the early flowering period is over, working from the top of the plant down until you get to a good bud. Also, lightly prune back the spent flower shoots to encourage re-blooming. In the fall, prune lightly to remove weak or tangled vines or thin the plant. Leave as much growth as possible to ensure a good flowering display in the spring.

Summer and Fall-Flowering/Group 3
Group 3 vines flower in late summer or in fall on new growth produced earlier in the season. Prune hard to 12-14” in late winter. Leave at least two to three pairs of buds on each stem of the plant. 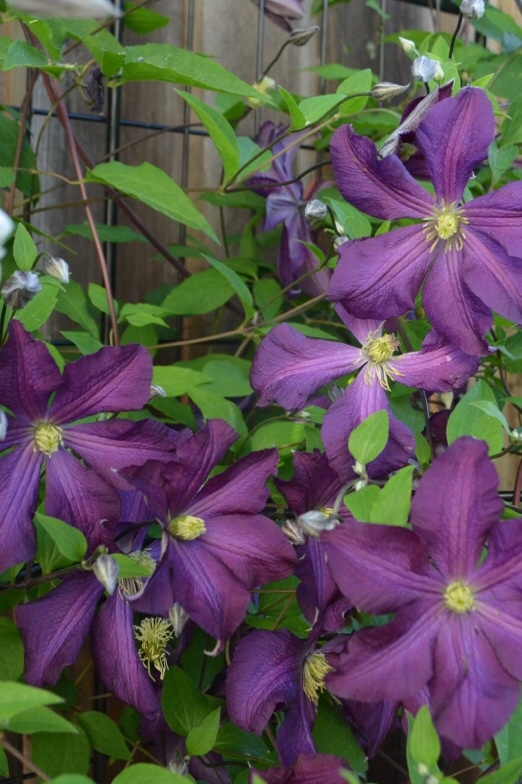 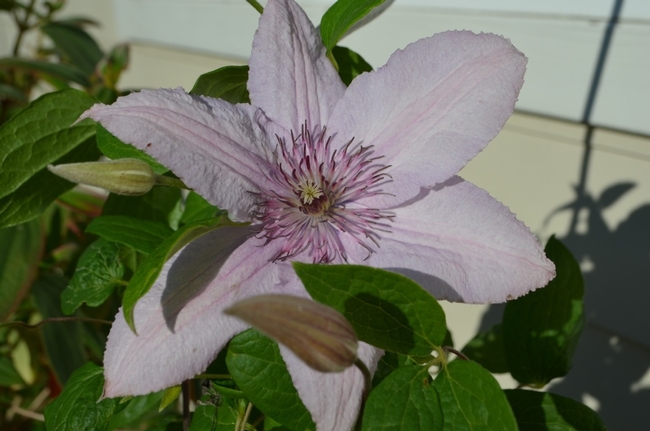 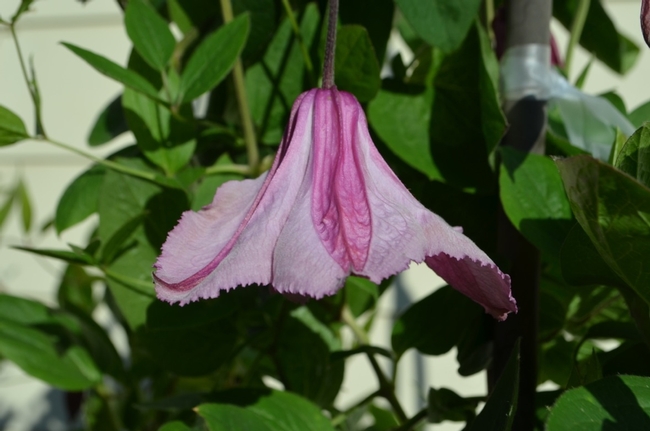