Bug Squad
sitenum=63
Happenings in the insect world
About Those Walking Sticks...

Well, why wouldn't anyone NOT want to? That's the question we ought to ask.

Enter doctoral candidate Matan Shelomi of the UC Davis Department of Entomology and Nematology. He will present his exit seminar on "Digestive Physiology of the Phasmatodea" on Wednesday, March 5 from 12:10 to 1 p.m. in 122 Briggs Hall, UC Davis campus. His seminar is scheduled to be video-taped for later posting on UCTV.

For a preview of his work, watch Shelomi's phdcomics.com video; he cleverly explains his complicated research in two minutes. It's a classic Matan Shelomi.

Shelomi, who studies with  major professor Lynn Kimsey, director of the Bohart Museum of Entomology and UC Davis professor of entomology, will receive his doctorate this spring and will then seek a postdoctoral position.

What will he be covering in his seminar?

"All life stages of all species of Phasmatodea (stick and leaf insects) eat nothing but leaves, yet they not only survive, but also reach record body sizes and plague-like population densities," Shelomi says. "Leaves are not an easy diet, as the nutrients are locked behind recalcitrant plant cell walls made of polysaccharides like cellulose, lignin, and pectin, and often defended with toxic secondary chemicals. Phasmid dependence on leaves suggests they have evolved a way to metabolize these compounds, yet what little data available on phasmid digestion is contradictory."
:This presentation covers five years of research at institutions spanning three countries, and confirms that phasmids do more than just lyse plant cells: they have the enzymes to break cellulose polymers down to sugar, as well as pectinases, all of which they produce themselves without microbial aid. The phasmid alimentary canal itself is compartmentalized into different sections that correlate with chemical digestion and xenobiotic metabolism. These adaptations allow an animal with a limited body space to digest and specialize on an otherwise limiting diet, with implications for herbivore nutrient economy as well as the search for enzymes for biofuel production."

Shelomi received his bachelor's degree in organismic and evolutionary biology from Harvard University in 2009, and immediately after, enrolled in graduate school at UC Davis.

Shelomi served as a teaching assistant for Bob Kimsey's forensic entomology class. In addition, he co-taught a freshman seminar with Lynn Kimsey on "Evolution, Creationism, and Intelligent Design." He has guest-lectured for Entomology  10 "Natural History of Insects"; Entomology 100 "Introduction to Entomology"; and Entomology 102 "Insect Physiology."

He has presented at numerous meetings of the Entomological Society of America  (ESA) and the Pacific Branch of the Entomological Society of America (PBESA) and organized or co-organized four symposia at those meetings.  He participates in the ESA's Linnaean Games and Student Debate teams. For his work with ESA and outside it, he won PBESA's John Henry Comstock Award in 2013.

There's more, much more. Shelomi presented a workshop at the 2012 International Conference on Science in Society, and received first place for his talk this past summer at the International Congress of Orthopterology in Kunming, China.  He has published his research in number of peer-reviewed journals.

The doctoral candidate's work has been spotlighted in the Sacramento Bee, California Aggie, DavisPatch,  plus blogs and vlogs like LiveScience, PHD TV, and Breaking Bio.  In addition, Shelomi answers entomology and biology questions on Quora.com, where he has been a top writer for two consecutive years. Huffington Post and Slate printed some of his Quora answers. You might remember that he won a "Shorty" (social media) award for his post "If you injure a bug, should you kill it or let it live?"

Lynn Kimsey says she doesn't know when he finds time to sleep.

Frankly, we don't, either. 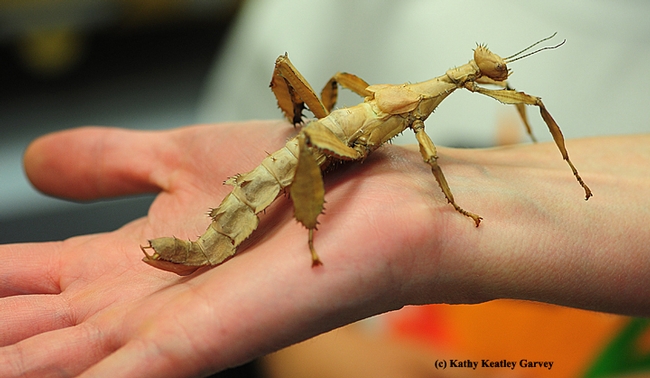