Maryann Frazier (Photo by Kathy Keatley Garvey)
"Bees are incredibly good at picking up what's in their environment."

Frazier, a 25-year extension specialist, expressed concern about the pesticide loads that bees are carrying, as well as the declining population of bees and other pollinators.

Beekeepers, she said, used to be much more concerned about colony collapse disorder (CCD), that mysterious phenomenon characterized by adult honey bees abandoning the hive, leaving the queen bee, brood and food stores behind.  CCD surfaced in the winter of 2006, but today, when beekeepers report their winter losses, "they're not blaming CCD any more," she said.

Turning to pesticides, she said a 2007-2010 U.S. analysis of some 1000 samples  (wax, bees and flowers) showed "an astonishing average of six pesticides per sample and up to 31 different pesticides per sample." The analysis, done by U.S. Department of Agriculture's Agricultural Marketing Service Lab (USDA/AMS) screened for 171 pesticides at parts per billion. The samples involved a CCD study, apple orchard study, migratory study and submissions from individual beekeepers.

Marin County Beekeepers recently undertook a similar study of pesticide analysis, raising $12,000 to do so ($300 per sample). "Marin is very mindful of pesticides, probably more than any other place," Frazier said. McNeil agreed. The results are pending publication.

"If we truly want to protect our pollinators," Frazier concluded, "three things need to be addressed or changed: 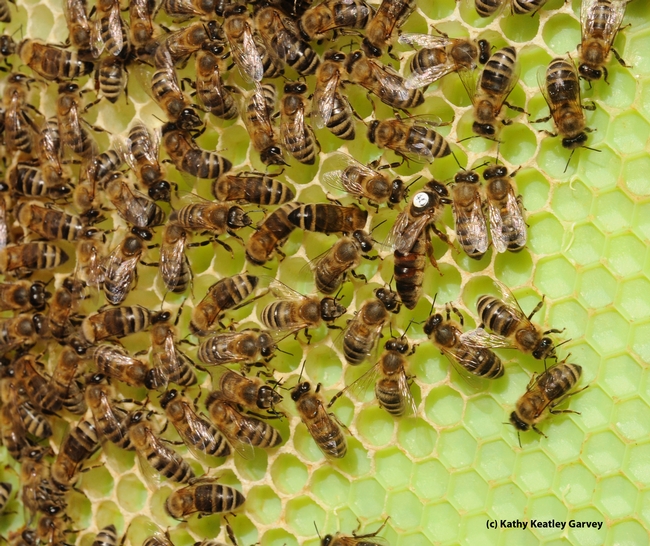 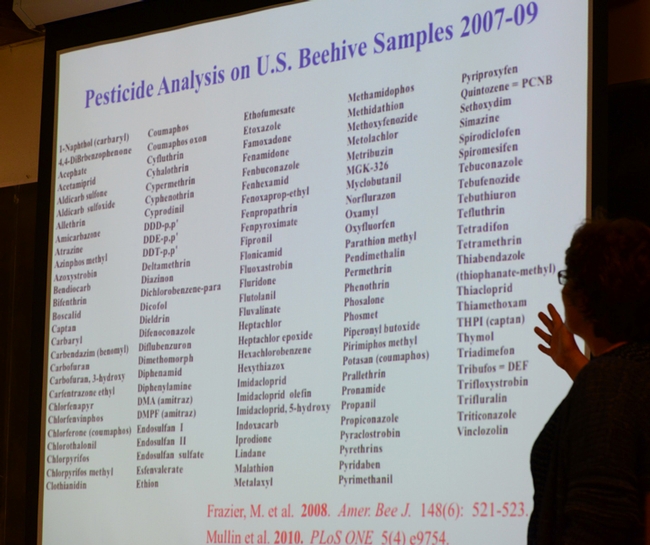 Maryann Frazier with the list of 171 pesticides screened in the U.S. survey. (Photo by Kathy Keatley Garvey)
Tags: Brian Johnson (20), honey bees (357), Maryann Frazier (2), Mea McNeil (5), Neal Williams (68), pesticides (7)
Comments: 1
Comments:
by Bill PD k Sleeper
on April 6, 2014 at 4:25 AM
WE have know for years that DDT,etc are bad for humans, why has it taker so long for us to realize that pesticides are bad for the entire environment! I believe it is greed of the commercial growers and Mansano.
Leave a Reply: