A mating pair of European wool carder bees (Anthidium manicatum) on lamb's ear. (Photo by Kathy Keatley Garvey)
It was a bee-utiful day for "The Bee Team" to tour the Häagen-Dazs Honey Bee Haven.

Visiting entomologist May Berenbaum, professor and head of the Department of Entomology at the University of Illinois at Urbana-Champaign, this morning stopped by the haven, a half-acre bee friendly garden on Bee Biology Road, University of California, Davis, to see the bee activity.

The garden, planted in the fall of 2009, is located next to the Harry H. Laidlaw Jr. Honey Bee Research Facility. It is open year around, from dawn to dusk and maintained by the UC Davis Department of Entomology and Nematology.

Thorp, who monitors the garden for bees, has found some 85 different species of bees--"and counting"--over the last five years. He began forming baseline data a year before the garden was planted.

The key goals of the garden are to provide bees with a year-around food source, to raise public awareness about the plight of honey bees and to encourage visitors to plant bee-friendly gardens of their own. Häagen-Dazs, a premier ice cream brand, generously supports the garden.

Berenbaum visited the UC Davis campus May 20-21 to deliver two presentations as part of the Storer Lectureships: "Bees in Crisis: Colony Collapse, Honey Laundering and Other Problems Bee-Setting American Apiculture" on May 20 and "Sex and the Single Parsnip: Coping with Florivores and Pollinators in Two Hemispheres" on May 21. (Click on this link to watch a video of her talk, "Bees in Crisis.")

Berenbaum, a talented scientist, dedicated researcher, dynamic speaker, creative author, and an insect ambassador who wants people to overcome their fear of insects, focuses her research on the chemical interactions between herbivorous insects and their host plants, and the implications of these interactions on the organization of natural communities and the evolution of species. 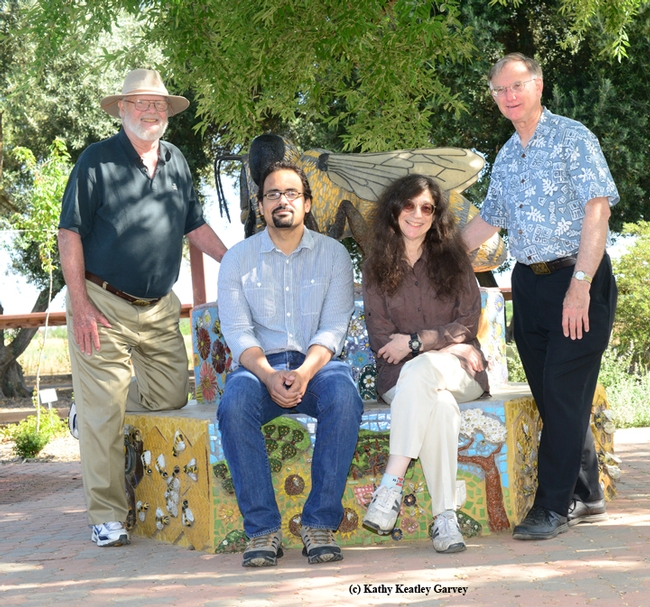 The Bee Team: In front are bee scientist Brian Johnson of UC Davis and May Berenbaum, professor and head of Department of Entomology at the University of Illinois at Urbana-Champaign. In back are native pollinator specialist Robbin Thorp, emeritus professor of entomology, and Extension apiculturist Eric Mussen of UC Davis. The sculpture is by Davis artist Donna Billick. (Photo by Kathy Keatley Garvey) 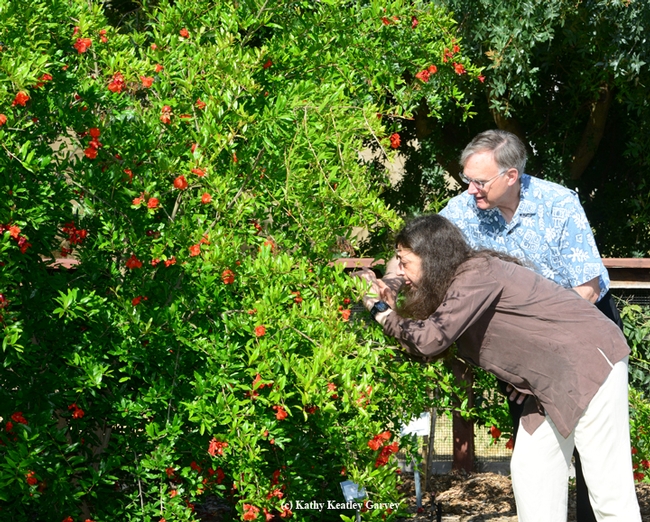 Extension apiculturist Eric Mussen points out a honey bee on a pomegranate blossom as entomologist May Berenbaum takes a photo with her cell phone. (Photo by Kathy Keatley Garvey) 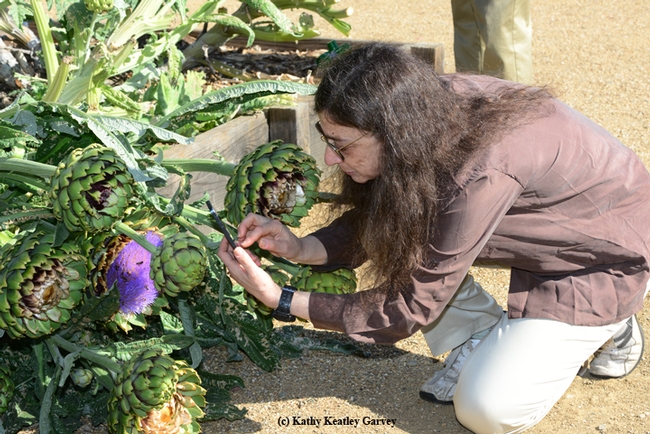 Entomologist May Berenbaum moves in for a photo of honey bees on a flowering artichoke. (Photo by Kathy Keatley Garvey)
Tags: Brian Johnson (20), Eric Mussen (260), Haagen-Dazs Honey Bee Haven (90), May Berenbaum (10), Robbin Thorp (278)
Comments: 2
Comments:
by Anne E. Schellman
on May 22, 2014 at 8:39 AM
Bummed to miss Ms. Berenbaum's talk but I look forward to watching it on video! Her cause of getting folks to overcome their fear insects so much is a noble one and something I try to help people with too.
by Kathy Keatley Garvey
on May 23, 2014 at 12:56 PM
May Berenbaum gave a great presentation. Here's a direct link to her talk: http://mediasite.ucdavis.edu/Mediasite6/Play/8893dbd0b9144f25880df75c6472030a1d
Leave a Reply: