How many times have you encountered a "honey bee" on the Internet, in a book, magazine, newspaper or other publication, and found a syrphid fly misidentified as a honey bee?

It's truly amazing how often syrphid flies are mistaken for honey bees.

Take the Eristalis tenax, a European hover fly quite established in the United States.

And quite "established" as a honey bee.

It's typically called a drone fly (it's about the size of a male honey bee or drone) but some folks also call it a hover fly, a flower fly or a syprhid.

No matter what you call it, it's a fly, not a bee.

Their larva is known as a rat-tailed maggot. Its long tail-like structure resembles that of a rat or a mouse.  Sometimes it looks like a corn dog with a tail. Or a butterscotch-colored lollipop with a tail.

Rat-tailed maggots live in such habitats as sewers, manure pile pools, drainage ditches and other badly polluted areas. Which is probably why you don't see them. (And if you did, you'd know it wasn't a corn dog with a tail.)

But in the adult stage, they're pollinators. They go where the honey bees go.

You'll find the adult drone flies nectaring on such flowers as lavender, catmint, daisies, sunflowers and yarrow, and hear people exclaiming "Look at the bees!"

I'm waiting for someone to say "They used to be rat-tailed maggots." 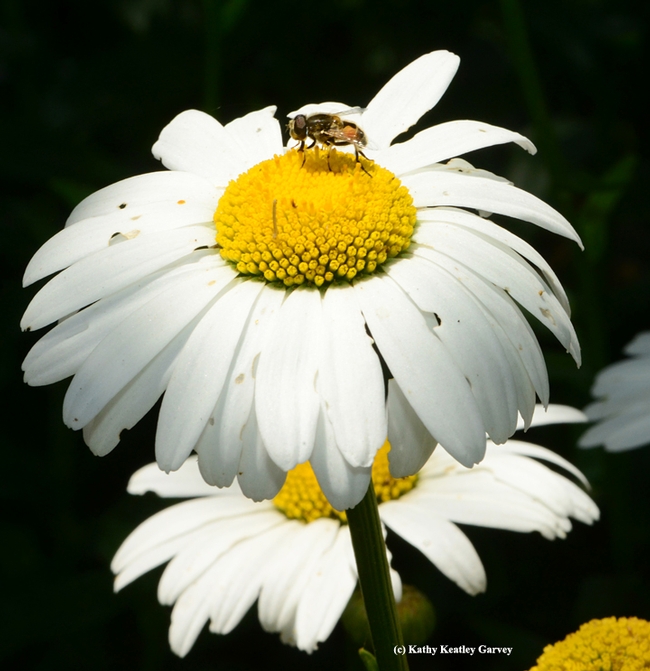 A drone fly, Eristalis tenax, on a Shasta daisy at the Luther Burbank Home and Gardens.. (Photo by Kathy Keatley Garvey) 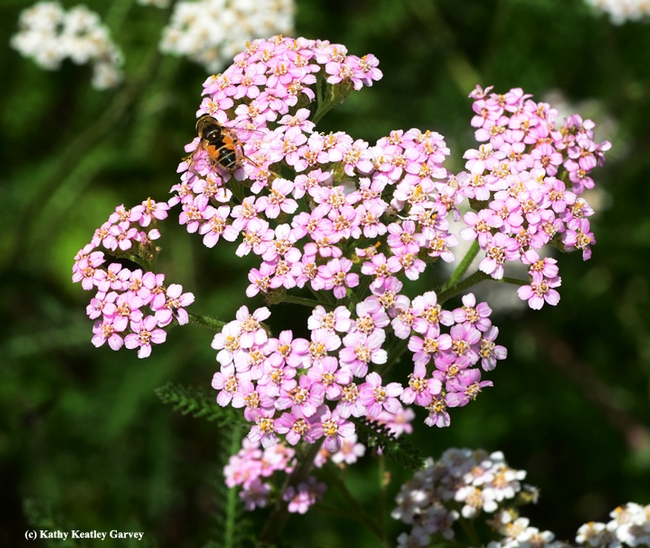 A drone fly,Eristalis tenax, on yarrow at the Luther Burbank Home and Gardens. (Photo by Kathy Keatley Garvey) 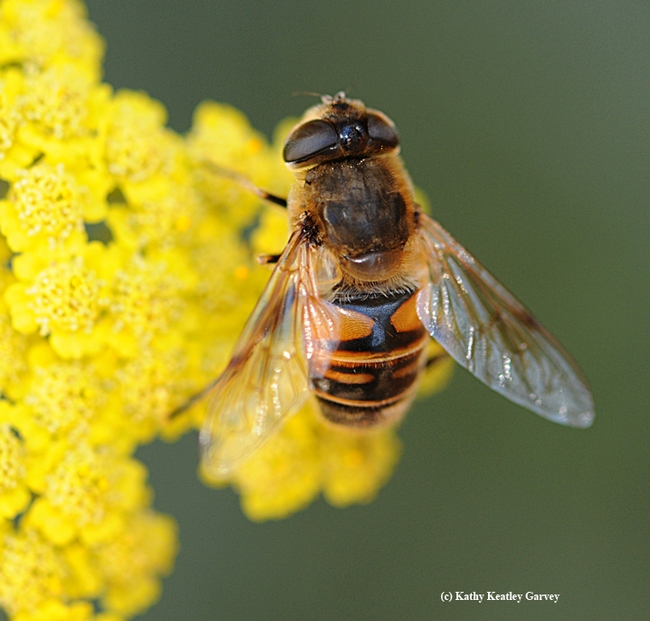 Close-up of a drone fly, Eristalis tenax. (Photo by Kathy Keatley Garvey)
Tags: drone fly (13), flower fly (12), hover fly. Eristalis tenax (1), rat-tailed maggot (3)
Comments: 2
Comments:
by Donna@gardenwalkgardentalk.com
on June 10, 2014 at 3:21 AM
Thanks for the book info. I too take a lot of photos of insects, but many times miss the ID since so many look similar. I have written on the drone fly too (located on my Bees and Friends tab), it is one I can identify. I did not ever see them at maggot stage when they had a "tail"! Thanks for the info.
by David Drew
on October 15, 2014 at 9:55 AM
My kids recently made the same mistake while picking raspberries this past weekend. Dozens of "bees" and "wasps" were zipping about the fruit and this temporarily put the picking to a halt. From a distance I shouted "one pair or two pairs of wings? Do they dart backwards or do they lumber". After a closer inspection of the critters, the kids had their answer and the picking continued without incident.
Leave a Reply: