Honey bee on zinnia. (Photo by Kathy Keatley Garvey)
It's National Pollinator Week! Do you know where your pollinators are?

It was good to see the University of California Agriculture and Natural Resources (UC ANR) conduct its recent "Be a Scientist" project. Thousands of participants across the state counted pollinators (and also mapped places where food is grown and checked off the ways they are conserving water), according to Pam Kan-Rice, assistant director, News and Information Outreach, UC ANR.

In a news release posted this week, she reported that "10,697 people counted pollinators, including bees, butterflies, bird and even a few bats."

“It's encouraging to see so many Californians interested in pollinators because they play a vital role in producing food,” said Barbara Allen-Diaz, UC vice president for agriculture and natural resources, in the news release. “People are conserving water in many different ways, which is important because water is a limited resource even in non-drought years. And, surprisingly, almost half of the people participating in our survey said they grow food.”

"Preliminary results," Kan-Rice reported, "show that people counted 37,961 pollinators in a three-minute period. Flies were by far the most abundant, accounting for 79 percent of the pollinators counted."

Meanwhile, on the national level, the Pollinator Partnership announced that National Pollinator Week, established by U.S. Congress in 2007, is growing by leaps and bounds. (Or maybe by wings and feet.)

In a press release, the Pollinator Partnership officials wrote: "Pollinators, like bees, butterflies, birds and other animals, bring us one in every three bites of food, protect our environment. They form the underpinnings of a healthy and sustainable future."

One of the many ways we can protect our pollinators is to pass the Highways BEE Act, introduced in Congress by Rep. Alcee Hastings (D-FL) and Rep. Jeff Denham (R-CA), co-chairs of the Congressional Pollinator Protection Caucus (CP2C), to create and/or preserve pollinator habitat along our highways. Individuals, along with regional and local organizations, are signing an online petition at http://www.pollinator.org/BEEAct.htm.

BEE is an acronym for "Bettering the Economy and Environment" Pollinator Protection Act.

And at the UC Davis level, the UC Davis Department of Entomology and Nematology is hosting an open house at its Häagen-Dazs Honey Bee Haven on Friday night, June 20, in observation of National Pollinator Week. The event, free and open to the public, will take place from 5:30 to 7 p.m. on Bee Biology Road, west of the central campus. Visitors will receive zinnia seeds until they're all gone.

The bee garden, installed next to the Harry H. Laidlaw Jr. Honey Bee Research Facility in the fall of 2009 with generous financial support from the premier ice cream company, is a year-around food source for bees and is also intended to raise public awareness of the plight of the honey bees and to provide ideas on what to plant in our own gardens.

When you walk through the front gates, you'll immediately see the six-foot-long mosaic ceramic honey bee created by self-described "rock artist" Donna Billick, co-founder and co-director of the UC Davis Art/Science Fusion Program. It's anatomically correct right down to the wax glands. 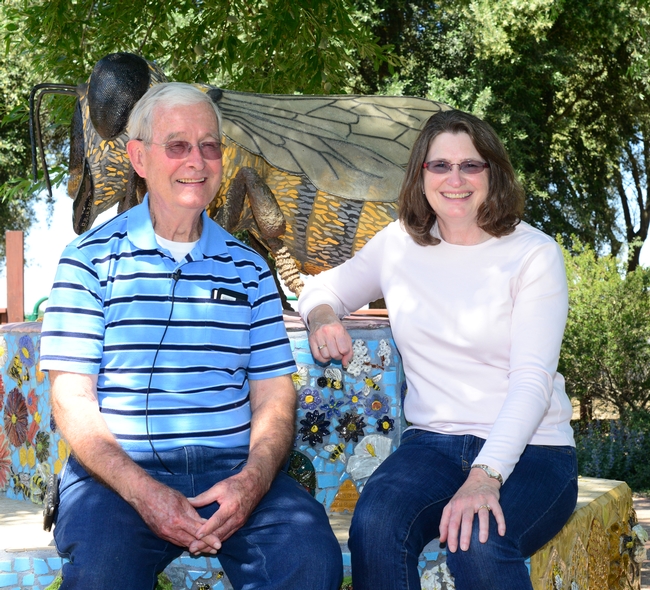 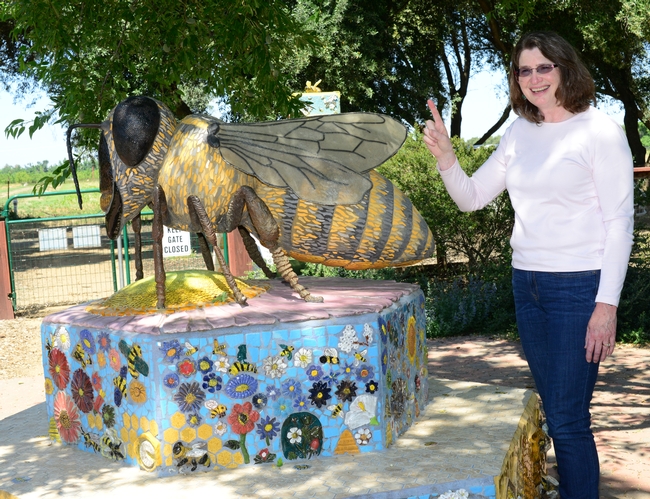