Eric Mussen at his honey-tasting event at UC Davis Picnic Day. (Photo by Kathy Keatley Garvey)
It's the end of an era for Eric Mussen.

He's known not only as the "honey bee guru," but “the pulse of the bee industry" and as "the go-to person" when consumers, scientists, researchers, students, and the news media have questions about honey bees.

Mussen was just named the recipient of the 2013-14 Distinguished Service Award for Outstanding Extension from the UC Agriculture and Natural Resources (UC ANR), a well-deserved honor.

For nearly four decades, he has devoted his research and extension activities toward the improvement of honey bee health and honey bee colony management practices.

Since 1976, Mussen has written and published the bimonthly newsletter, from the UC Apiaries, and Bee Briefs, providing beekeepers with practical information on all aspects of beekeeping.

"Without question, Eric is the No. 1 Extension person dealing with honey bees in the nation, if not the world," said MacArthur Genus Awardee Professor Marla Spivak, Distinguished McKnight University Professor Apiculture/Social Insects at the University of Minnesota. "Research colleagues, beekeepers and the public are all very lucky to have him.”

"I am basically all pro-bee,” Mussen told the American Bee Journal in a two-part feature story published in September of 2011. “Whatever I can do for bees, I do it...It doesn't matter whether there is one hive in the backyard or 15,000 colonies. Bees are bees and the bees' needs are the bees' needs.”

That says it all in a nutshell--or a bee hive.

What next? Eric Mussen will be around the UC Davis campus--his office in Briggs Hall and the bee lab at the Harry H. Laidlaw Jr. Honey Bee Research Facility--to help the new apiculturist,  Elina Lastro Niño of Pennsylvania State University get adjusted when she arrives in September.  She's known for her expertise on honey bee queen biology, chemical ecology, and genomics. (See news story on the UC Davis Department of Entomology and Nematology website.)

We rather expect that Mussen will continue to be involved with the bees. Maybe he'll write a book on California beekeeping, or update the one he co-authored years ago.

That could very well "bee."

Great job, Eric Mussen! A tip of the veil! 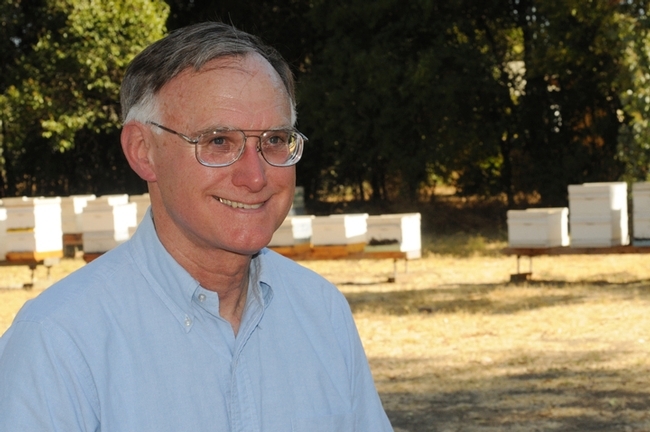 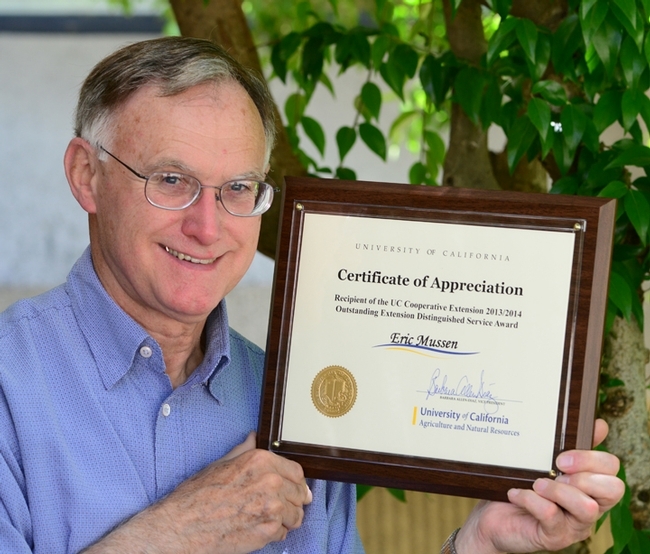 Eric Mussen with his outstanding service award from UC ANR. (Photo by Kathy Keatley Garvey)
Tags: apiculturist (1), Eric Mussen (250), Extension apiculturist (8), retirement (2), UC ANR (19)
Comments: 1
Comments:
by Shirley Humphrey
on July 3, 2014 at 8:46 AM
Nice article. Eric has been devoted to "bees" and "Cooperative Extension" since he arrived at UC Davis in 1976. He was a great person to work with and it was inspiring to watch the fun he had working with the beekeepers throughout the state. I suspect the author is correct--Eric will still keeping working with bees in some way.
Leave a Reply: