The Riverside Press-Enterprise may have the last word on blueberries for the 2009 season. Reporter Sean Nealon wrote two stories for last Saturday's paper about the Inland Empire's fledging blueberry industry.

One story reported on a Temecula blueberry farm where most of the fruit is harvested by the consumers themselves. The other story suggested that blueberries can make nice landscape plants. Both stories proffer the antioxidant-rich fruit with less strain on the pocketbook.

In the U-pick article, the reporter related information from UC Cooperative Extension's resident blueberry expert, farm advisor Manuel Jimenez of the UC Small Farm Program. He said California's blueberry acreage has increased from less than 20 to 5,000 to 6,000 in the past 12 years, most in the San Joaquin Valley. Blueberry production is labor intensive. A U-pick system cuts farm labor costs and the savings are passed on to consumers. In the store, blueberries are about $10 for 18 ounces. For Temecula U-pickers, the price is $5 per pint.

For the second story, Nealon spoke to Don Merhaut, an assistant UC Cooperative Extension specialist for ornamental and floriculture crops at UC Riverside. Merhaut started researching blueberries while a doctoral student at the University of Florida. After arriving at UCR in 2000, he began thinking more about blueberries' ornamental qualities -- their leaf texture, canopy, pink flowers, and, of course, delicious and healthful fruit, according to Nealon's article. 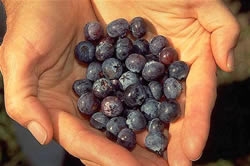