I recently read JoEllen Myslik's article about her war with Bermudagrass and the tool of soil solarization in fighting weeds and weed seeds. I am fighting a different war and hoping solarization will help my campaign.

My vegetable garden started out with a bang this year. Everything was doing well and producing like crazy. But in early July I noticed two squash plants stopped producing and the leaves began to yellow. My early planting of climbing beans didn't produce very many beans and then languished. Was I not watering them enough? Did they need more fertilizer? No, the soil was moist and they didn't respond to added fish emulsion. What could it be?

In mid-July I noticed the tomato plants had stopped growing taller than chest high. Usually they grow up and sprawl over the top of my support. After a third squash plant died along with a cucumber plant I decided to pull them all up, clean up the area and plant something else. By this time it was August.

Much to my surprise, as I pulled them up I found roots with galls, or swelling, all up and down them. Even the tiny root hairs had tiny galls. The roots were filled with galls! I took a sample in a plastic bag to the nursery and it was identified as Root Knot nematodes, Meloidogyne species.

I learned from the UC Davis Sight that “although California has many different species of root-feeding nematodes, the most damaging ones to gardens are the root knot nematodes, Meloidogyne species. Root knot nematodes attack a wide range of plants, including many common vegetables, fruit trees, and ornamentals. They are difficult to control, and they can spread easily from garden to garden in soil on tools and boots or on infested plants.” http://www.ipm.ucdavis.edu/PMG/PESTNOTES/pn7489.html

I could see I was in serious trouble. I also learned from the IPM sight that rotation in combination with fallowing and solarization can reduce root knot nematode numbers. So I decided to try it and followed the directions on the web site http://www.ipm.ucdavis.edu/PMG/PESTNOTES/pn74145.html .

It was a big job of pulling roots, tuning the soil, pulling more roots, leveling it all out, watering well, and then laying plastic over the top and tucking it in. I'm not sure it will work as the soil needs to rise to a temperature of 125 degrees and many of our Augusts days have been foggy or overcast here in Benicia. I am watching the temperature with a compost thermometer and hoping for a hot spell in September to do the job.

I have since learned from our IPM specialists that my nematodes most likely came in on soil with plants, and there is no way to eradicate them so I will have to continue to battle them. Some gardeners have used compost and worm casting tea to protect the roots. Also there is an organic product for home gardeners called Nematode Control but from what I have read from the above sites it has uneven results in testing.

My battle plant includes all the above methods. Wish me luck! The pictures show the damage on squash roots, tomato roots and the solarized garden. 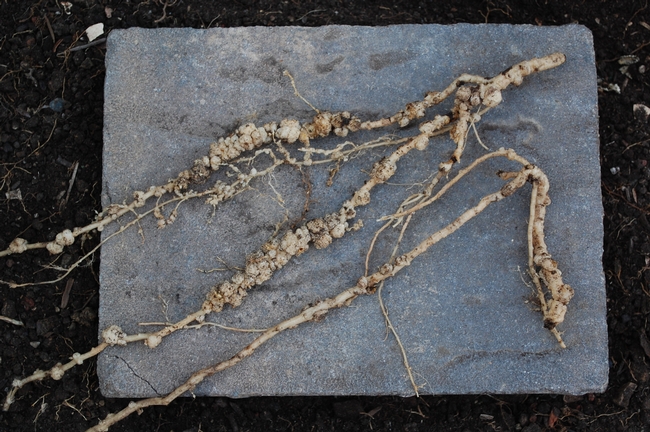 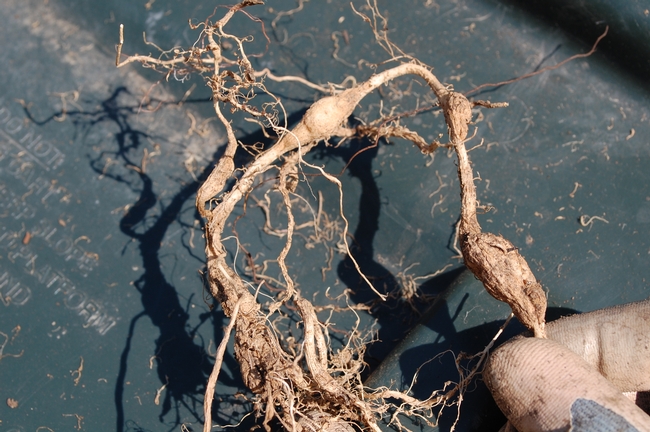 Close up of gnarled roots. 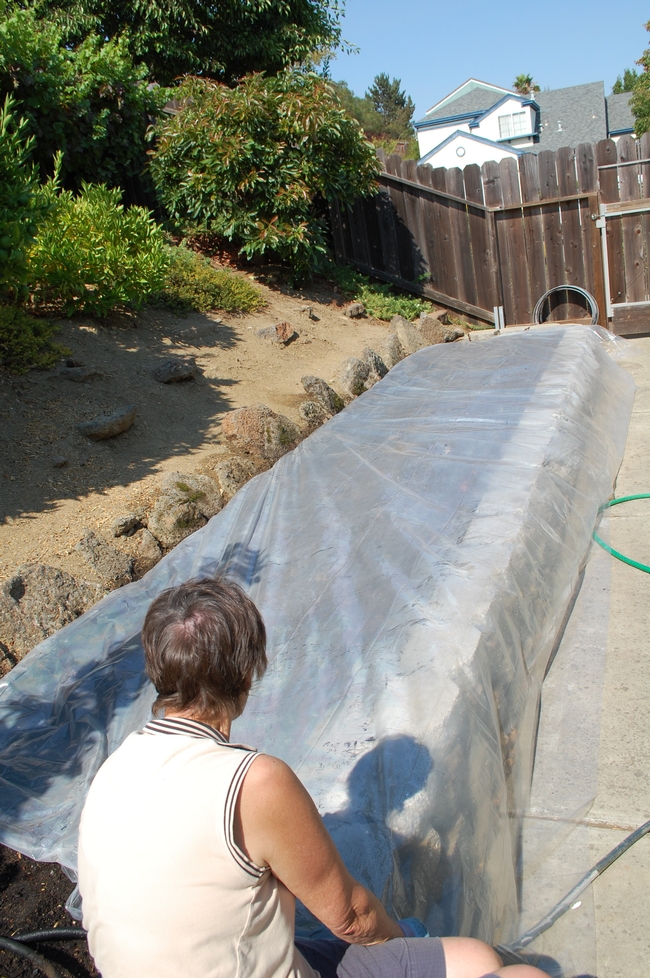 The garden bed in August.
Comments: 3
Comments:
by AA
on September 19, 2014 at 9:19 AM
Thanks so much for the investigative work. I'll be on the lookout.
by JoEllen Myslik
on September 23, 2014 at 2:33 PM
Wishing you much luck in your war, Libbey! :)
My war rages on.... ;)
by Kevin
on February 1, 2020 at 3:42 PM
I found that planting onions and stinky plants like fennel drive out the nematodes. Or they die off, but it solved my problem without loosing a season of gardening.
Leave a Reply: