Scott Carroll (Photo by Kathy Keatley Garvey)
Two categories of evolutionary challenges result from escalating human impacts on the planet. The first arises from cancers, pathogens and pests that evolve too quickly, and the second from the inability of many valued species to adapt quickly enough. Applied evolutionary biology provides a suite of strategies to address these global challenges that threaten human health, food security, and biodiversity. This review highlights both progress and gaps in genetic, developmental and environmental manipulations across the life sciences that either target the rate and direction of evolution, or reduce the mismatch between organisms and human-altered environments. Increased development and application of these underused tools will be vital in meeting current and future targets for sustainable development.
So begins the informative article in today's Science Express. Titled "Applying Evolutionary Biology to Address Global Challenges," it is the work of a nine-member global team led by Scott Carroll, evolutionary ecologist at the University of California, Davis.

Evolutionary biology techniques can and must be used to help solve global challenges in agriculture, medicine and environmental sciences, they said.

Science Express makes important papers available to readers before they appear in the journal Science.  The first-of-its-kind study will appear in a November edition of the journal.

“Evolutionary biology is often overlooked in the study of global challenges,” said lead author Scott, with the UC Davis Department of Entomology and Nematology and the Institute for Contemporary Evolution, also in Davis.  “By looking at humanity's problems across the domains of nature conservation, food production and human health, it is clear that we need to strengthen evolutionary biology throughout the disciplines and develop a shared language among them.”

The study calls attention to how evolutionary biology techniques can be used to address challenges in agriculture, medicine and environmental sciences, said Carroll, noting that these techniques, although seemingly unrelated, work within a similar set of evolutionary processes.

“These techniques range from limiting the use of antibiotics to avoid resistant bacteria and breeding crops with desired benefits such as flood tolerant rice, to less commonly implemented strategies such as gene therapy to treat human disease, and planting non-native plants to anticipate climate change,” Carroll said.

“A particular worry is the unaddressed need for management of evolution that spans multiple sectors, such as occurs in the spread of new infectious diseases and antimicrobial resistance genes between natural, human health and agricultural systems.” Harvested corn in a photo from the 1950s. The research team says that when a farmer plants a crop that is susceptible to pests, he might actually help the agricultural community as a whole by slowing down evolution of pesticide resistance, the authors said, citing an applied evolutionary biology tactic used in agriculture.
Said co-lead researcher and biologist Peter Søgaard Jørgensen of the University of Copenhagen, Denmark: “Many of the global challenges we face today have common biological solutions but we can tackle them effectively only if we are aware of successes and progress in all fields using evolutionary biology as a tool.”

In their paper, the nine researchers—two from UC Davis, one from UCLA and six from universities in Denmark, New Zealand, Maine, Minnesota, Washington state and Arizona--crafted a graphic wheel divided into three sectors, food, health and environment and cited the challenges that link them together, including rapid revolution and phenotype environment mismatch in more slowly reproducing or threatened species.

Carroll said the underlying causes of societal challenges such as food security, emerging disease and biodiversity loss “have more in common than we think.”

“Humans, pathogens and all other life on earth adapt to their environment through evolution, but some adaptation happens too quickly and some too slowly to benefit human society,” Carroll said. “Current efforts to overcome societal challenges are likely only to create larger problems if evolutionary biology is not swiftly and widely implementedto achieve sustainable development.”

Society faces two sorts of challenges from evolution, the research team said. “The first occurs when pests and pathogens we try to kill or control persist or even prosper because the survivors and their offspring can resist our actions,” Carroll said. “The second challenge arises when species we value adapt too slowly, including humans.”

Although practices in health, agriculture and environmental conservation differ, each field can better target challenges using the same applications of evolutionary biology, they said.

For example, when a farmer plants a crop that is susceptible to pests, he might actually help the agricultural community as a whole by slowing down evolution of pesticide resistance, the authors said, citing an applied evolutionary biology tactic used in agriculture.

Planting pest-friendly crops has been used in the United States with good results, the team said. Farmers planting these crops slow the evolution of resistance to genetically modified corn and other crops. Pests then reproduce in abundance eating the susceptible plants, and when a rare resistant mutant matures on a toxic diet, it is most likely to mate with a susceptible partner, keeping susceptibility alive. This approach works to suppress the unwanted evolution on the whole, but farmers will have sacrificed a short-term gain for the long-term good.

Similar innovative solutions exist across the fields of medicine and environmental conservation, they said.

“This is an example of how implementing applied evolutionary biology without a plan for regulatory measures may come at short-term costs to some individuals that others may avoid.” Jorgensen said. “By using regulatory tools, decision makers such as local communities and governments play a crucial role in ensuring that everybody gains from the benefits of using evolutionary biology to realize the long-term goals of increasing food security, protecting biodiversity and improving human health and well-being.”

Carroll is an affiliate of the Sharon Lawler lab,  UC Davis Entomology and Nematology. The research was funded in part by the National Science Foundation and the Australian-American Fulbright Commission. 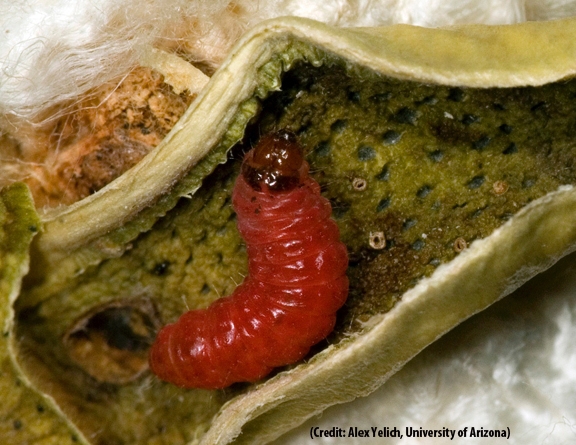 The pink bollworm, a global pest of cotton, has evolved resistance to genetically modified cotton in India, but not in Arizona where farmers have planted refuges of conventional cotton to reduce selection for resistance. (Photo by Alex Yelich, University of Arizona)
Tags: evolutionary biologist (1), pink bollworm (1), Science Express (1), Scott Carroll (11)
Comments: 0
No Comments Posted.
Leave a Reply: