Chancellor Larry Vanderhoef and Fran Keller with her outstanding graduate student teaching award.
DAVIS—If it creeps or crawls or flies or jumps, Mary Frances “Fran” Keller wants to know about it.

Her enthusiasm for all things entomological, and her desire to share that knowledge with others has led to the highest graduate student teaching award at the University of California, Davis.

Keller, a teaching assistant for four years in an insect physiology class taught by Charles Judson, emeritus professor of entomology, Bruce Hammock and Walter Leal, professors of entomology, received a certificate at a recent ceremony in the Walter A. Buehler Alumni and Visitors' Center—and the congratulations of Chancellor Larry Vanderhoef and Jeffery Gibeling, dean of Graduate Studies.

Judson and Leal praised Keller for her knowledge of entomology, her creativity and responsiveness, and her ability to individualize the content.

“She is dedicated to assisting our students,” Judson said, adding that her “extensive field experience adds an additional dimension to the list of skills she is able to incorporate into her teaching activities.” Keller is also an accomplished artist, illustrator and nature photographer.

Shawn Purnell, one of Keller's students, described her as a “brilliant entomologist, a great teacher assistant, but most importantly to me, she is a friend.”.

“My perception and expectations of teacher assistants were forever raised when I met Fran,” wrote Purnell in a letter of support. He aspires to become a physician.

“Truthfully, the very first time I had lab, I thought Fran was a little crazy. I had never before seen anyone become so enthralled in explaining the differences between male and female flies, especially at 7:30 in the morning. I thought to myself, why would I ever be interested in this and how as this knowledge ever going to benefit me? To my surprise, by the very next lab I found myself blissfully explaining the conditions of Hardy-Weinberg Equilibrium to my lab partner. Fran's passion toward her students and enthusiasm for not only zoology, but also all aspects of academia, created an irresistible learning environment.” Charles Judson, emeritus professor, and Fran Keller, outstanding graduate student teacher, just before the ceremony.
Purnell said Keller gets to know her students individually and then focuses on their interests. “She showed me countless examples of how the subject (biological sciences) applied to medicine. I especially remember her telling a story about how a graduate student willingly ate a tapeworm to further her research, and what the doctors had to do in order to remove it.”

Describing Keller as “a very open and amiable person, so eager to share everything that she's learned” and as “an inspirational person,” Purnell wrote that it is “reassuring to know that out of a maze of 30,000 students and faculty at Davis that there are people like Fran who really care.”

Student Robyn Jimenez echoed the praise. “She was one the best TA's at Davis I have ever had….Fran really motivated me to learn the material not just for the exam, but for later use in upcoming classes... Fran was actively engaged with us, asking us if we needed help and always willing to annotate the lessons if we asked.”

Said Leal: “This class is the only undergrad class that requires a 30-minute final oral exam. Fran helps students prepare until 10 p.m. the night before the exam.”

In his nomination letter, Leal wrote that “Fran encourages, inspires, challenges and motivates.” Students find her very helpful and friendly, “which makes it easy to ask questions,” Leal added.

“Not all students learn in the same way,” she said. “There are global, linear and kinesthetic learners. I believe that illuminating a student's learning style opens the door for thinking critically.”

Keller, who grew up in St. Charles, Mo., but has lived in Davis since 1989, said her “very best  teachers would not accept less than what they knew I was capable of doing. They understood my potential and treated me as an individual in a sea of many.”

Scheduled to receive her doctorate in entomology in June 2009, Keller researches tenebrionids or darkling beetles.  She studies under major advisor Lynn Kimsey, director of the Bohart Museum of Entomology and chair of the Department of Entomology.

"Fran is one of the most gifted students I've had,” said her major professor, Lynn Kimsey, director of the Bohart Museum of Entomology and chair of the Department of Entomology. “In addition to her skills as a teacher, she's pursuing a fascinating thesis project on a group of beetles, and has terrific business skills; a unique combination in a graduate student."

Based at the Bohart, Keller also designs museum posters, such as the Butterflies of Central California, Dragonflies of California, California State Insect (California Dogface Butterfly) and Pacific Invasive Ants.

The Graduate Council, Office of Graduate Studies and the Teaching Resources Center sponsored the awards. 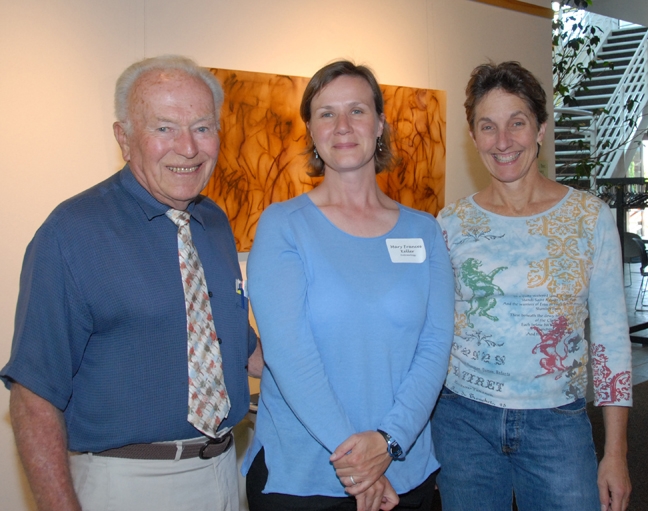