One of the most obvious manifestations of calcium deficiency in strawberry is “tip burn” of the rapidly growing new leaves in the center of the plant.  Some varieties tend to manifest this symptom more than others.

Calcium is an important structural of component of cell walls and cell membranes in plants.  A deficiency of calcium in the plant leads to a general collapse of membrane and cell wall structure, and the resulting leakage of polyphenols concludes with necrosis in the affected areas.  Since there is broken down and dead tissue in these areas, microbial infection frequently results, but this is a secondary effect.

The scientific literature says that in strawberry, leaves containing less than 0.9 percent calcium are deficient, with a significant percentage of plants showing tip burn symptoms.   Furthermore, calcium sufficiency is said to be in the area of 1.5% of dry leaf tissue.

Calcium deficiency in plants is not necessarily a direct result of a lack of calcium in the soil and as such might not easily be addressed simply by increasing the amount of calcium fertilizer applied.  Calcium is moved from the roots to the rest of the plant via evapotranspiration by the water conducting elements of the plant, also known as the xylem.  If there is a lot of evapotranspiration, such as on a hot, dry day, calcium will be moved from the roots and up through the plant.  Conversely, lengthy spells of cool, humid (read fog) weather will not facilitate evapotranspiration and subsequently calcium movement can be restricted.  Plant organs such as the fruit and developing leaves do not transpire as much as a fully mature, expanded leaf, and therefore would tend to be the first to express calcium deficiency. 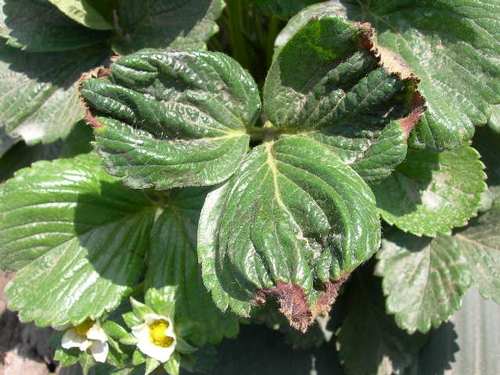 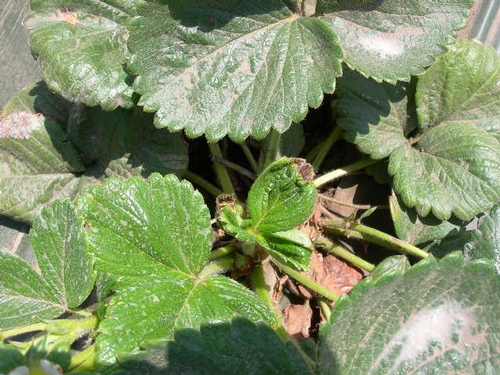 Photo Mark Bolda, UCCE
"Tip burn" typical of calcium deficiency on the very newest leaves of strawberry.
Comments: 7
Comments:
by mahmoud diab
on December 10, 2013 at 10:47 AM
please i need more info regarding strawberry fruit good shelf life.and calcium fertilizer.
by Mark Bolda
on December 12, 2013 at 8:44 AM
Hi Mahmoud,
I don't have good empirical evidence that applied calcium results in longer shelf life in strawberries, so I can't help you there I am afraid. My recommendation to growers seeking better shelf life has always been the same: pick with damaging the fruit, cool the fruit as soon as possible, and make sure that your plant is as healthy as can be.
by maheshgowda, b. m.
on December 16, 2015 at 1:48 AM
sir i have 600 strawberry plants all plants showing same deficiency symptom, how to manage it.
by Justin Huff
on December 18, 2021 at 6:09 AM
This seems to suggest you need to lower humidity - but this study from University of AZ suggests the opposite. https://cals.arizona.edu/strawberry/Hydroponic_Strawberry_Information_Website/Tip_Burn.html
by Mark Bolda
on December 18, 2021 at 9:26 AM
Hi Justin, This is interesting that you bring this up. I have participated in Dr. Kubota's short course (excellent, btw, highly recommend it) on strawberry and recall this part. It's notable that she also points out that Ca is moved up by the strawberry plant by evapotranspiration, but in the case of the greenhouse, this mass flow of water must be going too quickly to effectively be moving the calcium. Thus the need to raise the humidity to levels where guttation is seen.
I should point out to you too, that we don't really guttation on these foggy days described in the blog, again underlining that the water is not moving - also the symptoms of Ca shortage don't really show unless it's been foggy for a while, like more than a week and a half.
Thanks for sharing this, it's a very good point to understand.
by Mailyn
on April 20, 2022 at 4:53 PM
Hi,

Thank you for sharing this, am from the Philippines and am growing a strawberry here. My plants are showing burnt like leaves even those very young leaves like shown above. Can calcium foliar help?
by Mark Bolda
on April 25, 2022 at 4:48 PM
Mailyn, you can try the calcium foliar. Sort of curious since I don't know the Philippines. What is the relative humidity in your area? Additionally, lest we forget an important point, what are the calcium levels of your soil?
Leave a Reply: